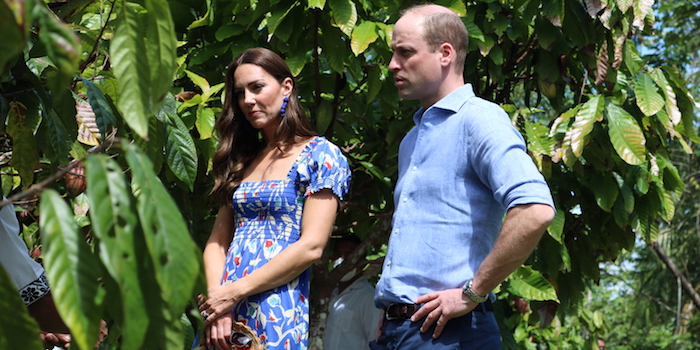 Day 2 of the Caribbean Tour 2022, yesterday March 20, saw Prince William and The Duchess of Cambridge visit a cacao producer, the Garifuna community, and conservation specialists in Belize.

The first stop of the day was at the Che ‘il Mayan cacao farm where William and Kate were given a tour of the farm and learned about the cacao plants, before trying their hand at grinding the cacao beans.

The future Queen also watched her husband pounding away with a mortar and pestle made from volcanic rock as he ground the nibs too and she said: “The smell of the chocolate is amazing.”

William even joked about giving up his day job as a working royal asking Julio Saqui owner of the family run chocolate firm “Do you take apprentices? Can I come and work for you it’s my kind of thing.”

The couple’s eyes also lit up when they saw chocolate fountains – dipping tortilla chips into the brown sticky liquid – and they tried hot chocolate made from the organic farm with Kate confessing: “I think our children will be very jealous.”

The next stop was to Hopkins, a small village on the coast which is considered the cultural center of the Garifuna community in Belize.

When the couple travelled later to Hopkins to meet the Garifuna community – the descendants of Africans and indigenous Carib people expelled from the island of St Vincent before settling in Central America – they soon found themselves pressganged onto the dance floor. They wowed the delighted crowd with their dance moves.

William, 39, gave a little shimmy after they were treated to a welcome dance in Hopkins, known as the country’s happiest village. But it was Kate, 39, in a blue Tory Burch dress, who was first onto the dancefloor, cutting shapes with nine local school children from the Garifuna Cultural Centre.

William watched on as Kate stole the show before he began dancing with local organiser Laura Cacho. They were soon holding hands and gyrating to the music as locals screamed in delight.

The royal couple were treated to dancing and food by the local Garifuna community on the Caribbean coast. They were offered a plantain coconut broth called Hudutu and a sweet sava porridge called Sahau with Belizian celebrity chef Sean Kuylen.

They also spoke to a small group of marine conservation specialists to learn more about Belize’s pioneering record on ocean conservation. It has the world’s second largest reef.

Mamma G, also known as Joan Gloria, pastor of the National Garifuna Council, helped provide the dancing children, and said: “We welcome them both. It is an honour. We welcome everybody. We are the happiest village in Belize. Nobody who comes here is sad. We are about love, respect and welcoming people with open arms.”

Villagers welcomed the royal visit as a boon for the tourism industry. Casper Castille, 22, said: “This is a tremendous opportunity for us. This is an eye-opener for the rest of the world.”

The final engagement of the day was with conservation specialists, learning about marine protection and the restoration efforts to Belize’s barrier reef led by communities across the country. I think this was at the same location as the Garifuna community visit.

William and Kate also planted a tree while there to mark The Queen’s Platinum Jubilee.

For the day, Kate wore a new Tory Burch dress and brought back her Anya Hindmarch fan clutch first worn in Canada in 2011. I’ve always loved this clutch, so it’s nice to see it back. I’ll pass on talking about how much I dislike the dress. Kate wore Sezane earrings.