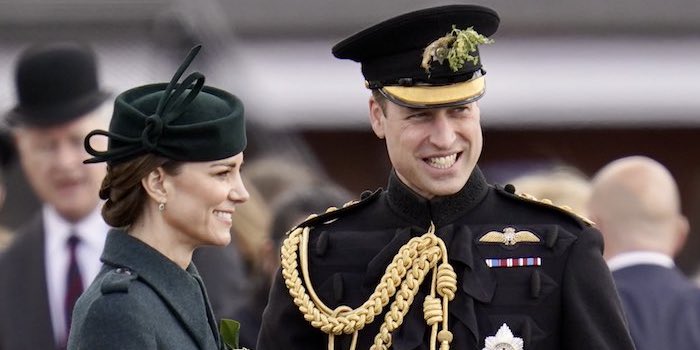 Prince William and The Duchess of Cambridge joined the 1st Battalion Irish Guards for St. Patrick’s Day today, March 17, at Aldershot where Kate handed out shamrocks. William is Colonel of the Regiment for the Irish Guards.

This is the first in-person St. Patrick’s Day parade in two years, as this event was cancelled in 2020 and 2021 due to the pandemic.

William and Kate watched the parade and then handed out shamrocks to the officers and guardsmen. Kate also gave a shamrock to the Irish Guards mascot, Seamus, who was handled by drummer Adam Walsh.

Drummer Adam later revealed of Kate: “She said, ‘I hope I put the shamrock on right this time’ and I helped her and we carried on.

“I was very excited as this was the first time in three years we have seen them.

“Seamus behaved himself. I was afraid he was going to let us down. I was more nervous than he was. But he was fantastic.”

Kate received posies from two little girls. I cannot find the name of the girl in pink, but the little girl in navy and red is 20-month-old Gaia Money. She was adorable – she presented Kate with the posies and then took them back. It was too cute.

The mum-of-three was presented with a beautiful bouquet of flowers during the engagement from 20-month-old Gaia Money. The little girl stole the show as she then took both bouquets from Kate.

“Shall we swap? Now you have of both them,” Kate told Gaia.

Mum Lorraine Money said afterwards: “The Duchess was lovely. Gaia took both bouquets and she let them keep them. Gaia has been practising her curtsey at nursery school but failed! I am from Jamaica and we spoke about Jamaica as they are going there next week.”

Here is a video of the event, and the interactions with the girls starts a 1:40.

I used to bemoan how Kate would wear green every year to this event (except the one year she didn’t), but I’ve come to appreciate the yearly green because I love green and think Kate should wear more of it lol.

So naturally Kate wore green this year. She sported a green coat by Laura Green which I think is new. It looks like The Emilia to me. It’s £3,200.00 and is described as “A distinguished piece cut in speckled hunting green military wool perfectly complemented with a khaki green silk satin lining. The Emilia is finished with a structured dagger collar with epaulettes held down with navy leather buttons and a matching wool buckle belt.”

It’s cute. It’s not my fave St. Patrick’s Day look, but it’s not the worst.

I love Kate’s jewelry this year, though. She brought out her emerald and diamond earrings which we never see enough of IMHO, and it’s always nice to see the Irish Guards Gold Shamrock Brooch.

Kate’s hat is a new (I think) pillbox from Lock & Company.