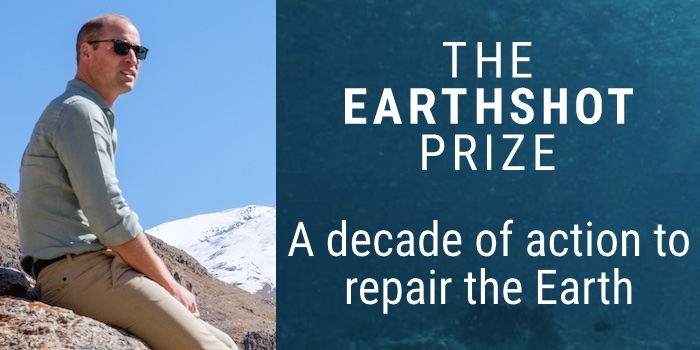 Prince William today launched a new initiative through the Royal Foundation: The Earthshot Prize – an ambitious set of challenges to inspire a decade of action to repair the planet.

The Earthshot Prize is an environmental prize awarded to 5 winners each year over the next 10 years which will provide at least 50 solutions to the world’s greatest problems by 2030. Over the course of the year, The Earthshot Prize will unveil a small number of challenges which will seek answers to the biggest issues currently facing the planet, including: climate and energy, nature and biodiversity, oceans, air pollution, and fresh water.

The Earthshot Prize is modeled after the moonshot challenge in the 1960s which brought about a wave of new technology we currently use in everyday life, and got us to the Moon. More on the Earthshot challenges from their website:

The challenges will be a chance for everyone’s voice to be heard, we want to motivate and inspire a new generation of thinkers, leaders and dreamers . Our prizes will reward progress across all sectors of industry and society, not just technology. The prizes could be awarded to a wide range of individuals, teams or collaborations – scientists, activists, economists, leaders, governments, banks, businesses, cities, and countries – anyone who is making a substantial development or outstanding contribution to solving our environmental challenges.

I think this is an amazing idea. I like that it’s focused on action and tangible steps not just on “raising awareness” – because we’re already aware, what are the nexts steps, you know. I hope this brings about so much innovation and brings eyes on to the innovation already being done. I hope William really throws himself into this because I think it’s a great idea.

KP released a statement from William:

The earth is at a tipping point and we face a stark choice: either we continue as we are and irreparably damage our planet or we remember our unique power as human beings and our continual ability to lead, innovate and problem-solve.

Remember the awe inspiring civilisations that we have built, the life-saving technology we have created, the fact that we have put a man on the moon.

People can achieve great things. And the next ten years present us with one of our greatest tests – a decade of action to repair the Earth.

Kensington Palace also released a new photo of William, above, taken by the Duchess of Cambridge while at a glacier in the Hindu Kush mountain range in the Chitral District of Pakistan’s Khyber-Pakhtunkwa Province – they were there on day 3 of their Pakistan tour. It’s a really nice photo; one of Kate’s best.