After a delay due to an incident in Oxford Street, Prince William and Kate Middleton attended the Royal Variety Performance at the Palladium Theatre in London last night, November 24. 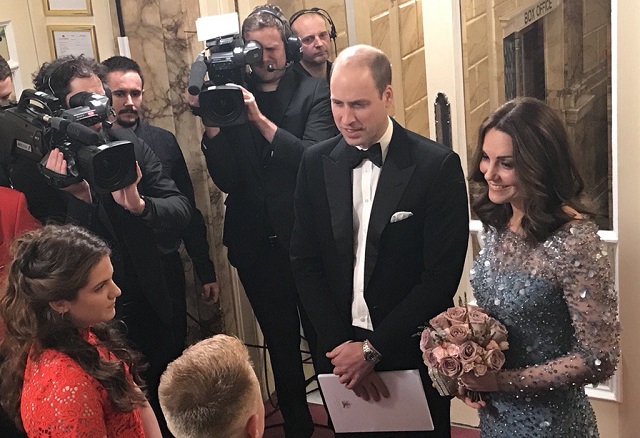 William and Kate arrived and were greeted out front before moving inside where Kate received flowers. The couple then watched the show, which was hosted by actress and comedian Miranda Hart, where William apparently got involved with Hart’s skit. The Royal Variety Performance will air on ITV in December.

The Cambridges’ arrival was delayed almost an hour due to gunshots being reported at about 4:38pm local time. Police say they initially responded “as if the incident is terrorist-related” but have since said they had not yet found any suspects or any evidence of shots being fired at the station in Oxford Street. Due to the delay, the traditional meet-and-greet with the performers on stage was dropped.

Kate wore the same earrings to the RVP that she wore in Paris: The Queen’s Diamond Chandelier Earrings.

Kate’s shoes and clutch were the same as in Paris as well: her Oscar de la Renta Platinum Lamé Cabrina pumps (which I still love – Christmas splurge gift to myself?), and her Jenny Packham Casa clutch.

Overall, I do think Kate looks pretty here – although I wish her hair had been up do show off the diamonds.