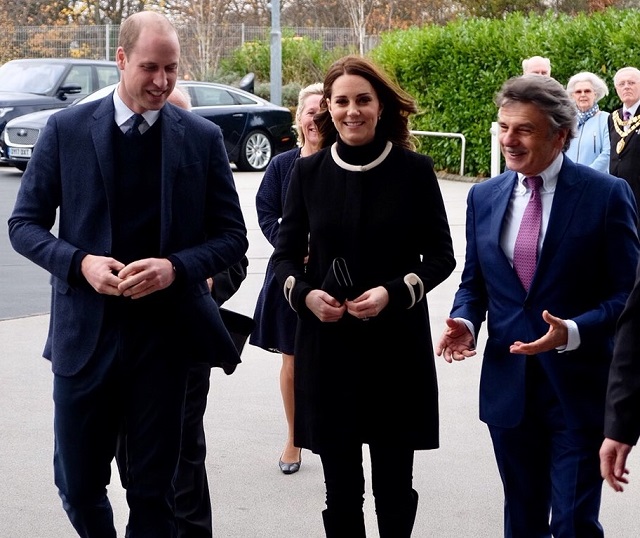 The first stop of the day was Jaguar Land Rover’s Solihull Manufacturing Plant where William and Kate met with staff and apprentices to learn about the 480 acre site, which creates 8,000 cars a week. They toured the facility, learning about how each car is made and how mountain rescue volunteers are specially trained to use them in difficult terrains.

William and Kate met with the Mountain Rescue Team at the Experience Centre where they each took a car around an off-road driving course. Both William and Kate got to drive a car, which is cool since Kate usually lets William be the only one to get involved when they are together, so it was nice to see her actually get involved and get behind the wheel (even though pregnant women are advised not to drive the course).

Something Kate got to do that William did not was race Topcliffe Primary School’s winning model race car. A group of school children from Topcliffe Primary School, who won the Jaguar Primary School Challenge with their model race car, were present at the factory and showed Kate their winning car. Kate got to hit the button while William watched – which, as someone who’s snarked about Kate not pressing buttons for over a year, brings a tear to my eye. *Sniff* You go, Kate!

Coach Core was founded by the Royal Foundation in 2012, and launched by William, Kate, and Harry ahead of the 2012 Olympics. The program is a year-long apprenticeship which gives young people age 16-24 the chance to become sports coaches.

The last stop of the day was at Acme Whistles, a family-run whistle factory which has been operating in Birmingham since 1870. Acme Whistles created the first police whistle, and today over 100,000 whistles are produced at the factory each week.

William and Kate learned about the 147 year history of Acme Whistles before touring the facility. They toured the workshop and watched the production process of the whistles, before meeting staff and apprentices at a short reception where they unveiled a plaque to mark their visit.

William brought up George while at Acme Whistles, joking that if George got hold of a whistle, they’d never get any peace.

Prince William was given a whistle today at manufacturers Acme Whistles and joked: “Don’t show that to George – we’ll never get any peace.”

For the non-Coach Core related parts of the day, Kate repeated her Goat Washington Coat (£680.00) she first wore in NYC in December 2014. For this outing, Kate paired the coat with a black turtleneck and black skinny jeans, her Kiki McDonough Lauren Leaf Earrings and Mulberry Bayswater Clutch in black suede, and new black boots from Russell & Bromley – the Hi Ride Mid Heel Riding Boots (£325.00). Did Kate really need another pair of black boots? She has several already.

Kate changed into a second outfit for the Coach Core visit, donning her Perfect Moment “Mini Duvet” jacket and New Balance x SB Exclusive Sneakers she wore back in February at a Heads Together training day.

I chose this photo because you also get to see Catherine Quinn‘s outfit.

Here is a video of William and Kate arriving at the AVFC:

Here are more photos from the day. I don’t know what Kate is reacting to in this photo, but it’s amusing.

159 thoughts on “Kate goes off-roading during visit to Birmingham”