Kate Middleton may be out of action due to pregnancy, but she’s keeping in the news thanks to the Anna Freud Centre, of which Kate is Patron, dropping a video yesterday of Kate giving an introduction to their latest project. 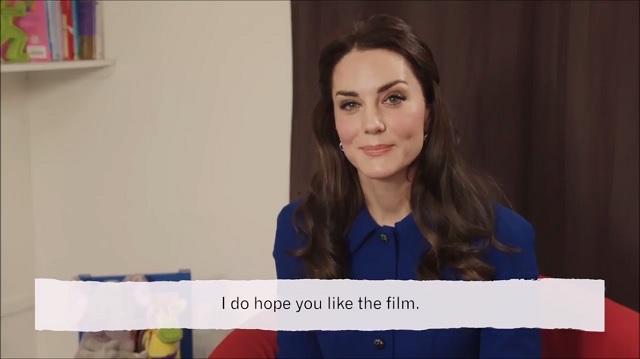 Back on January 11 of this year, Kate dropped by the Anna Freud Centre Early Years Parenting Unit for a visit, at which time she also recorded the introduction to this video.

In the video, Kate says:

“Hello. Mental health is how we feel and think. Things that can’t really be seen, but that affect us every day, and talking about them can feel difficult. A charity called the Anna Freud National Centre for Children and Families have made this animation with children just like you. It helps us all talk about our mental health. What to say and who to talk to when we have feelings that are too big to manage on our own. And how to listen and help if one of our friends is finding things difficult. Sometimes, it’s just a simple conversation that can make things better. I do hope you like the film.”

HRH The Duchess of Cambridge is #TalkingMentalHealth with schools children & parents
Our new animation is online nowhttps://t.co/R8YX9jTueP pic.twitter.com/6EEwHn4IUa

In addition to the video, Kate made a statement launching the AFC’s new initiative, You’re never too young to talk mental health, saying:

“As parents, we all want our children to have the best possible start in life. Encouraging children to understand and be open about their feelings can give them the skills to cope with the ups and downs that life will throw at them as they grow up. It’s important that our children understand that emotions are normal, and that they have the confidence to ask for help if they are struggling. This is why I am proud to support the You’re never too young to talk mental health campaign by the Anna Freud National Centre for Children and Families, which is being rolled out across primary schools this autumn. The campaign’s resources are excellent tools to support parents. They demonstrate how we can help children express their feelings, respond appropriately, and prevent small problems from snowballing into bigger ones.”

Here is the “Talking Mental Health” video that AFC produced: