William and Kate arrived at the Commonwealth War Graves Commission Ypres Menin Gate Memorial for a Last Post ceremony. They were joined by Philippe and Mathilde, as well as Sir Tim Laurence (Princess Anne’s husband and Vice Chairman of the Commonwealth War Graves Commission) and Theresa May (British Prime Minister), and over 200 descendants whose ancestors are named on the Gate and representatives from nations who fought on the Salient.

“Every evening the city of Ieper falls silent at eight o’clock and the Last Post is played by the buglers of the Last Post Association. With the sounding of this bugle call, the two hundred and fifty thousand British and Commonwealth soldiers who were killed on the Ypres Salient during the First World War are remembered.

“The battlefields of the Salient came to define the war for many British and Commonwealth soldiers. The defence of the city at such great cost meant that it became hallowed ground. Winston Churchill said of Ypres, ‘a more sacred place for the British race does not exist in all the world’. It was from here, along the Menin Road, that so many marched towards the frontline. After the war, when a location was being sought for a lasting memorial to these men, it seemed fitting for it to be built by the Commonwealth War Graves Commission in this place.

“Today, the Menin Gate records almost fifty four thousand names of the men who did not return home; the missing with no known grave. Members of our families; our regiments; our nations; all sacrificed everything for the lives we live today.

“At the Memorial’s inauguration, the British commander Field Marshall Lord Plumer spoke movingly to the assembled families, saying of their lost loved ones: ‘He is not missing; he is here’. The local Police Superintendent attended the same inauguration ceremony. He heard the sounding of the Last Post and was so moved, that he and his friends later resolved to play it, here, every evening in perpetuity. A simple tribute from local people to those who fought.

“We extend our deep gratitude to the Last Post Association and the people of Ieper for this daily act of homage in honour of our fallen. During the First World War Britain and Belgium stood shoulder to shoulder. One hundred years on, we still stand together, gathering as so many do every night, in remembrance of that sacrifice. Thank you for the honour that you do us.”

Then, more than 54,000 poppies fell from the roof of the memorial – one for every name on the Menin Gate.

The Menin Gate Memorial to the Missing is a war memorial dedicated to the British and Commonwealth soldiers who were killed in the Ypres Salient of World War I and whose graves are unknown.

William and Kate then met some of the descendants of those who served on the Ypres Salient from 1914-1918. 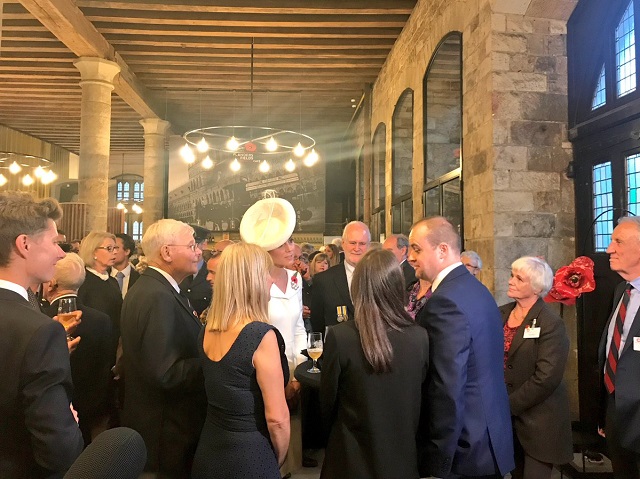 William and Kate, along with Philippe and Mathilde, visited the Market Square in Ypres for an event telling the story of WWI in the Ypres Salient. Cloth Hall, Ypres, was backdrop for the night’s tribute to those who served in Belgium in WWI – original images and video of those that served telling the story of Passchendaele in WWI were protected onto Cloth Hall.

The Battle of Passchendaele, the Third Battle of Ypres, was a campaign during the First World War fought by the Allies against the German Empire from July to November 1917 for control of the ridges south and east of the Belgian city of Ypres.

“More than 800,000 soldiers on both sides of the war died in the blood and mud of the Ypres salient between 1914 and 1918. Many marched on the so-called Menin road, on which the gate built in 1927 now stands, from Ypres town to the front lines. Still today, the remains of dozens of men are found every year in Flanders fields, identified initially by the colouring and markings of the boots in which they died.

“Of the three major battles in Ypres, however, it is the third and final, whose centenary will pass in the early hours of Monday, that bears the greatest infamy. ‘I died in hell – they called it Passchendaele,’ the soldier and poet Siegfried Sassoon wrote of the carnage that raged from 31 July until 10 November 1917. Perhaps the first world war battle that is today most sharp in the collective British consciousness is the Somme, but at the time it was this battle, and this place, that was synonymous with the hopelessness and horror of what was playing out on foreign fields.”

I saw some opposition to this outfit in some of the comments on the last post and here are my thoughts:

I don’t think her outfit is inappropriate here. All of the items Kate wore (minus the shoes) were repeats, white is a symbol of hope, and Kate wore white to a WWI commemoration in Belgium three years ago and the only opposition to that outfit was to the peter pan collar. In fact, multiple people said her white outfit then was appropriate. And that outfit was new at the time whereas this one is a repeat.

This event was about remembering the fallen, and I think wearing repeated items was a smart choice here because it takes the focus off of her clothes. This outfit is not glaringly out of place or offensive (like the hot pink in NYC), so while some people may not chose white for a commemoration service, I think it would be best to take the focus off of Kate’s clothes.

376 thoughts on “William & Kate with Philippe & Mathilde in Belgium”