Day 4 of William and Kate’s tour began on July 20 with a visit to the Heidelberg German Cancer Research Centre. They met researchers and toured the stem cell research lab where they got a briefing on leukemia and were able to look at a microscope.

“Inside British stem cell biologist Dr Michael Milsom, 42, originally from Chesterfield, showed the couple around one of the laboratories. He said: ‘It’s really helpful to have a visit from the Duke and Duchess as they publicise the importance of work we do here. ‘The UK and Germany are leaders in this field of stem cell research.’ …

“He told William and Kate about the latest developments in stem cell research. The Leeds University graduate, told them how his team focuses on the question whether and how an accumulation of DNA damage in stem cells is the causes for ageing of an organ system. Such damage may cause exhaustion of the stem cell pool and loss of the organ’s capacity to regenerate. The work is particularly important in research into leukaemia.

“William said, ‘Ladies first’ when he was asked to look at the cells through a microscope. Afterwards Kate said: ‘It’s in 3D too, which is amazing.’ William, who also looked through the microscope, asked how far down the line the centre’s stem cell research was and added: ‘It’s fascinating work.'”

The next stop on the tour was the central square in Heidelberg where the Mayor showed them around a German market. Lots of stands were set up offering local food and drink, and the royal couple tried their hand at pretzel making. 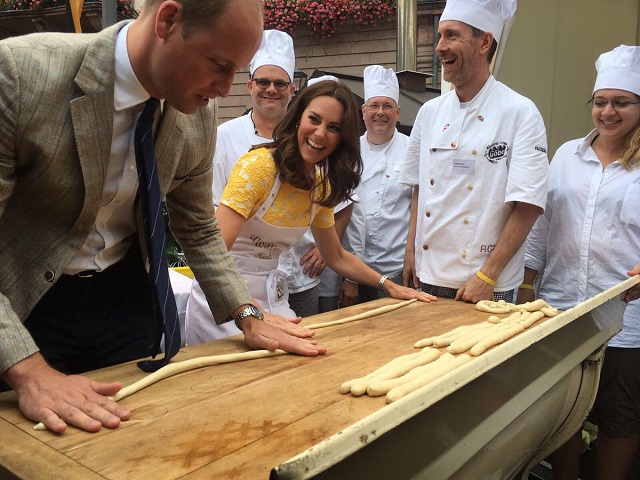 More from the Express:

“William, 35, said: ‘The children will love these later,’ But when he was presented with another treat for them a moment later, he laughed and sighed and said: ‘George’s sugarload is going to be over the top of the scale.’ The royal couple had a go at making sweets with Jens Meier, owner of Heidelberger Bonbon Manufaktur, and his assistant Melanie Melchior.

“William proved not as much of a natural at it as Kate did. ‘Yours is better than mine,’ he said, laughing, to his wife, who picked it up slightly more quickly after admiring Melanie’s technique and telling her: ‘You’re making it look so easy.'”

William and Kate’s next stop was the River Neckar where they took part in a boat race with rowers from both Cambridge and Heidelberg. Heidelberg is Germany’s oldest university city and is twinned with Cambridge in the UK. The royals didn’t do any rowing, and instead acted as coxswain for the rowers.

William’s boat won, and the royals were both given medals at the end. Afterward, they enjoyed some beer.

In the evening, the Cambridges attended a reception in the vintage mirrored hall of Clärchens Ballhaus in Berlin. They met people, both German and British, from the worlds of art, culture, style, fashion, and technology.

One of the people they met was Game of Thrones actor Thomas Wlaschiha, who plays Jaqen H’ghar on the show. He told the Express: “They said they really liked Game of Thrones and have watched every series. They wanted spoilers but I said I couldn’t tell them. I’m surprised they have time to watch such a long running series.”

I mean, of course they have time to watch Game of Thrones, it’s not like they have full time, demanding jobs.

For the first part of the day, Kate chose a new bespoke yellow brocade Jenny Packham dress in a floral design. Eh. She paired the dress with her Monsoon Fleur Wedges and bespoke Alexander McQueen clutch. Kate wore her Cartier watch and a new pair of earrings from Oscar de la Renta, the Pearl Sun Star Button earrings (£142).

For the rowing portion of the day, Kate wore yet another Breton top. This time her Brenton top is from German brand Hugo Boss. She wore skinny jeans and her Superga Cotu sneakers.

For the evening reception, Kate wore a German designer, Markus Lupfer. She chose the Wild Sparrow Dress from the Pre-AW 17 collection, which I dislike. I dislike prints, and this one is quite dark. Kate added a belt, which is fine, I guess. She also wore her Prada sandals that she wore in Day 3, and her Soru Jewellery Baroque Pearl earrings. Kate carried a new clutch.

The most interesting part of the outfit is the pearl bracelet Kate wore. Kate wore Princess Diana’s Triple-Row Pearl and Diamond Spacer Bracelet.

Kate wore a bracelet to the Spanish State Banquet which I couldn’t identify (given lack of photos). I am now wondering if this is the bracelet she wore that night.

I have not had a chance to read all of the comments on previous posts, but I have read enough to get a feeling of some of the sentiment about this tour, and I want to comment my thoughts on that here since I didn’t get the chance to in the previous post’s comment section. I don’t think this tour is a holiday. This tour is not my kind of holiday at all. Being forced to meet a ton of people, and not being able to fully enjoy the places I’m visiting because I have to always be “on”, and not being able to set my own schedule, that is absolutely not my version of a holiday.