Prince Harry was in Newcastle on February 21 for another Heads Together London Marathon training day, but unlike when he, William, and Kate did basically nothing on February 5 Harry gave a speech this time. 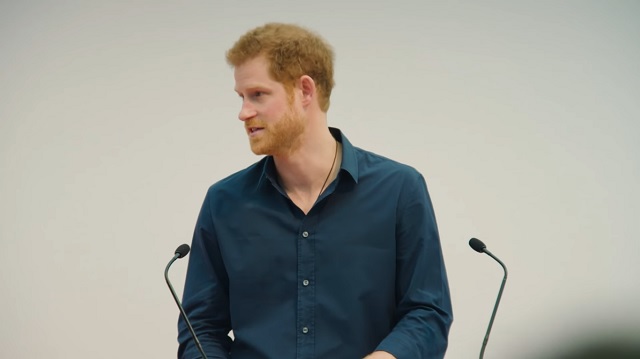 Here is the transcript of Harry’s speech (I cut out the first couple paragraphs for space):

“Jayne-Anne, Paul and Iain may seem to have very different stories. At their core, though, they share one invaluable lesson – a lesson that is at the very heart of the Heads Together campaign: none of us can get through a mental health difficulties without being willing to have a conversation and being able to admit that we might need some help.

“William, Catherine and I started this campaign because we saw that fear of judgement, stigma, and outdated prejudice meant that too many people stayed quiet about their mental health challenges. And we saw that this fear of even talking about a problem often meant that issues could quickly escalate out of hand. How is it that for most, the first time mental health is talked about is when they’re already suffering?

“Stigma cannot and must not be the reason we shy away from equipping ourselves and our families for the day that a dark cloud may appear. I have seen the threat that this fear and stigma poses in my work with veterans and my former Army friends. Guys and girls in the armed services often need to think they are invincible. I know first-hand from my time as an Apache pilot that you do not want anyone to question your ability to cope with pressure and stress.

“When you are called on to assist with a rescue mission in a dangerous situation, you want everyone to know you won’t be fazed by the challenge. Questioning can bring about doubt, when you know the training will kick in. We all consider ourselves at the top of our game and strive for perfection. We all want to be as professional as humanly possible.

“What I’ve learned through my work with the Army’s Personnel Recovery Unit, is that this need to be seen as tough and invincible can follow you home from the battlefield. And when the truth is – no one is invincible and anyone who is repeatedly exposed to tress and trauma will need help with their mental health, this pride can become very dangerous.

“I have met too many people who waited too long to start having that conversation. I have met people who disconnected from their spouses and children rather than admit that they needed to speak to someone. I have sat with a man who struggled to admit he needed help even as he could not stop shaking and blinking as he fought post-traumatic stress. I have met people who considered taking their own lives rather than admit to anything that might make them look weak in the eyes of others. This is why we want to change the way we talk about mental health.

“It’s the reason I try never to use the ‘D’ in ‘PTSD’ because I don’t think it’s helpful to label people unnecessarily with a ‘disorder’ – and I’ve seen with my own eyes some of the worst cases recover. It’s the reason we want to work with all of you to have conversations at work, with your friends, with your family to confront any notion that a mental health challenge needs to be kept quiet.

“For me it’s as simple as this: if you have a persistent painful issue with your knee, you wouldn’t hesitate to speak to your friends about it or to go to the doctor to get it checked it out. You do that because you know if a problem is left unaddressed it could get worse, not better. And you don’t hesitate to speak about it because you know there is no shame in a bad knee!

“Our mental fitness is no different. If you feel stressed or like a cloud is hanging over you, you cannot know how to fix that feeling unless you start speaking about it. It is hard admitting something is wrong, especially when you can’t explain it. Not knowing what depression feels like, not knowing what the cure for anxiety is.

“What I really want to say is that if you do have the courage to speak about it you really can make things better – trust me. Mental health challenges are not a life sentence. I have seen people go from their lowest point – physically shaking, or unwilling to leave the house, or even with suicidal thoughts – to a place of real optimism and resilience in a relatively short space of time. Recovery really is possible. But it can’t happen if we aren’t willing to have that conversation. I can assure you, not talking about it will make it worse, and talking about it will equip you for the days ahead.

“So please, when you go back to your desks speak to your colleagues about how you cope with stress. When you go home tonight, maybe tell your kids that sometimes you struggle with your emotions and that it is ok to talk about it. Or instead, maybe pick up the phone to a friend who you suspect may be finding it hard to admit that something isn’t right.

“If we are all willing to have these conversations, we will end the stigma around mental health once and for all. That’s what Heads Together is trying to achieve – removing the stigma to pave the way for better access to services that can help.”

I like that Harry gave examples of why soldiers would have a problem opening up after coming home from war, and examples of people he has met who were unwilling to open up. But if the royals and Heads Together really are only focusing on depression and anxiety, then they need to say those specific mental health issues when speaking and not use the blanket term of “mental health” since they are only focusing on one specific issue under the very broad “mental health” banner.

Here is a video of most of his speech. He really needs to memorize his speeches more so he’s not staring down at his notes so much.

Here are some more photos from Harry’s time in Newcastle.