Kate Middleton is “miserable” at pool, you guys, and she showed off her “miserable” pool skills while visiting Action for Children projects in Wales yesterday, February 22.

In her first engagements as Patron of Action for Children, Kate stopped by two of their projects: MIST (a child and adolescent mental health project which works specifically with children who are living in care with foster families or birth families) and Caerphilly Family Intervention Team (which works with children with emotional and behavioral difficulties, problems with family relationships and those who have or who are likely to self-harm).

Kate first visited MIST in Torfaen where she met families who use the service. She also took part in a creative session and a quick game of pool. She was then given flowers by two young girls before leaving.

Action for Children is a 147 year old charity which helps disadvantaged children across the UK by providing early intervention support to stop neglect and abuse, fostering and adoption services, among others. Their 7,000 staff and volunteers operate over 600 services, improving the lives of 390,000 children, teenagers, parents and carers every year. 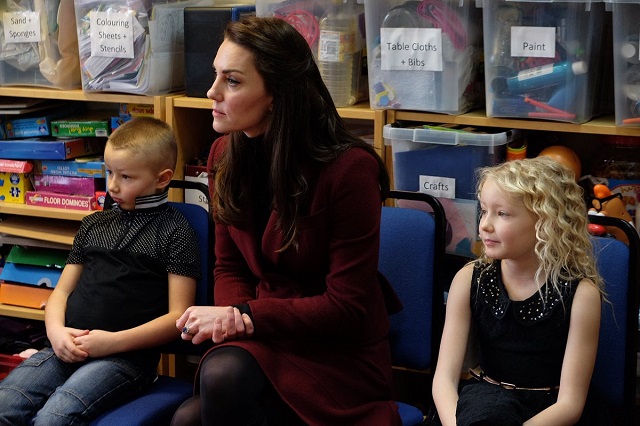 Kate then visited Caerphilly Family Intervention Team (FIT) to learn about their work with children with emotional issues. Kate met families who use the service and viewed FIT’s family therapy work which helps families understand the reasons behind certain behavior.

A spokesman for Kensington Palace said:

“The Duchess of Cambridge is incredibly proud to follow Her Majesty The Queen as Patron of Action for Children. The Duchess firmly believes that every child who needs it should be given the best support at the earliest opportunity, and is pleased to support their important work. She is looking forward to getting to know the people that make Action for Children such a success and meeting the young people they work with.”

For her trip to Wales, Kate wore a repeat. She chose the burgundy skirt suit from Paule Ka which she previously wore in 2012. Kate’s Kiki McDonough Citrine and Diamond Cushion Drop Earrings made their second ever appearance. She also wore her Stuart Weitzman HalfNHalf Stretch Rider boots again, that black turtleneck she’s been loving this year, and her Cartier watch.

I actually really liked this suit when Kate first wore it in 2012 – enough to put it at Number 19 on my Top 25 Fave Kate looks – even though everyone on the forum I was on at the time hated it because the skirt was so short. I prefer her 2012 styling, although I understand why she would add the turtleneck and boots because of the time of year.

I guess there was a little bit of wind when she arrived at one of the projects, because she had to hold the skirt down.

Kate greeted members of the public who had come out to see her.

Here is a lovely video of Kate’s interactions with people. She calls herself “miserable” after taking her first shot at pool, and apologizes for her poor performance. I like that she loosened up a bit and was willing to try playing pool, but I wish she wouldn’t apologize. If she’s anything like me, saying “I’m sorry” for things one shouldn’t apologize for is a defense mechanism, and one must break that habit in order to have confidence in oneself.

Kate also spoke to two young girls about taking the flowers they gave her home for Charlotte, and about how old George and Charlotte are. Both girls gave Kate a hug before she left.

153 thoughts on “Kate plays pool at Action for Children”