Child Bereavement UK supports families and educates professionals when a baby or child of any age dies or is dying, or when a child is facing bereavement. They train more than 8000 professionals every year to help them better understand and meet the needs of grieving families.

William has been Royal Patron of Child Bereavement UK since 2009.

William and Kate were at the Child Bereavement UK center in Stratford, London to mark the one year anniversary of its opening. To begin their engagement, William and Kate met professionals and volunteers who work with families at the center.

The royal couple then joined a “Memory Jar” activity in a Support Group session where children make memory jars for people they’ve lost. During the Memory Jar activity, William spoke about losing his mother, Princess Diana, when he was 15.

To 12-year-old Shinobi Irons, who filled two jars representing memories of his late grandmother and godmother, William said, according to Irons’ mother Lorna: “He told my son that when his mum died he was 15 at the time and he was very angry and found it very difficult to talk about it. It was very personal and it was very special.”

William then spoke to 9-year-old Aoife, who lost her father, saying: “Do you know what happened to me? You know I lost my mummy when I was very young too. I was 15 and my brother was 12. So we lost our mummy when we were young as well. Do you speak about your daddy? It’s very important to talk about it, very, very important.”

Aoife’s mother said afterward: “I couldn’t believe it when he started to talk about his mother. It was very emotional and I was willing myself not to start to cry. I almost did. I am telling my children that if they take anything away from this day, it is what he said about how important it is to talk. Kids do not forget that. Sometimes it hurts but we can remember the happy things too. It is so important to talk.”

[Quotes from the Express]

I find it interesting that William admitted he was angry after his mother died, and I would love it if he elaborated on that. I think that tends to happen more than people talk about, and I think it would be a good thing for someone to openly admit the anger one feels when one experiences the death of a loved one.

I would like to know the set up for the “Do you know what happened to me” question, because it seems out of the blue and a bit self-centered when taken out of context like it is.

The Duke and Duchess of Cambridge then cut the cake to mark the anniversary. 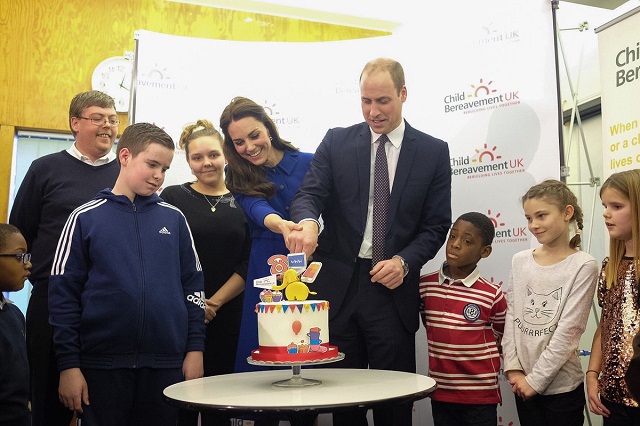 William was going to cut the cake solo, with Kate hovering in the background, until he called for her to help him. Then someone joked that it was just like their wedding cake. When William pushed the knife down, he went, “Weeee”, which is something I do all the time for random stuff so that’s actually rather endearing to me that he did that.

Video: William and Kate cut a cake to celebrate the 1st birthday of @cbukhelp Stratford centre. Just like our wedding cake, he jokes! pic.twitter.com/4aLRCHi7wO

Judging by the tweets, they were there for about an hour and a half – again, tweets are not a wholly accurate way to tell the time spent some place, but it’s a rough estimate.

Here is a video of the receiving line when they arrived.

And here is a video of William talking to people during the Memory Jar activity.