After skipping their big fundraising event back at the end of November and sending a letter instead, Kate Middleton, as Patron, visited East Anglia Children’s Hospice (EACH) in Quidenham today, January 24.

Kate visited the hospice to get an update on the progress of the Nook Appeal, the launch of which Kate attended back in November 2014. Kate met with families, staff, and supporters today during her visit, and participated in various therapy sessions offered by the hospice.

On arrival, Kate was greeted by children from thee local schools. She also met the parents (Tristan and Claire Cork) and sister (Nell Cork) of a five year old boy (Finnbar Cork) who died last September from a brain tumor. The Daily Mail says Kate “hugged the family before telling them: ‘I’m a mum and I can’t imagine what you’ve been through.'”

EACH “supports families and cares for children and young people with life-threatening conditions across Cambridgeshire, Essex, Norfolk and Suffolk. [Their] care and support is tailored for the needs of all family members and delivered where the families wish – in their own home, at hospital, in the community or at one of three hospices in Ipswich, Milton and Quidenham.” 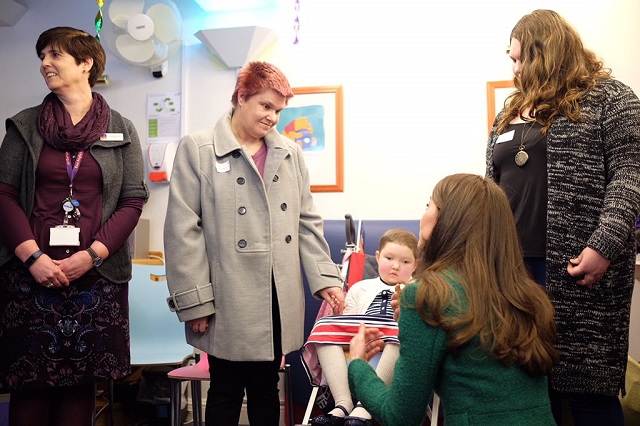 The Nook is a planned new hospice in Norfolk which will replace the Quidenham site in order to accommodate the demand for EACH’s services. EACH currently provides specialist care and support for 351 children and young people with an additional 417 family members receiving face-to-face therapeutic support. EACH is looking to raise £10 million to build The Nook. 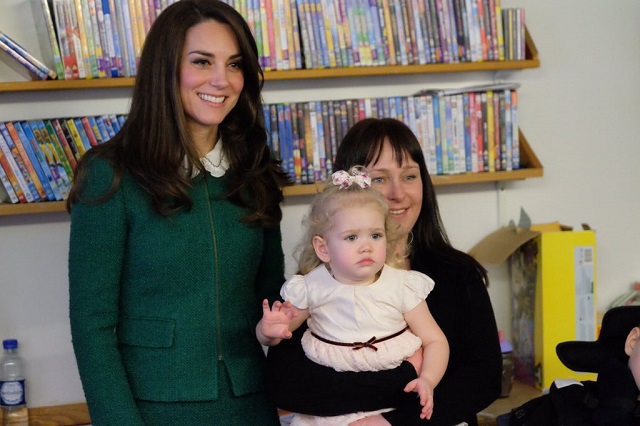 Part of the tour of the current facility, which reporter Victoria Murphy said on Twitter was quite cramped, included Kate stopping by the sensory room and testing out the equipment. 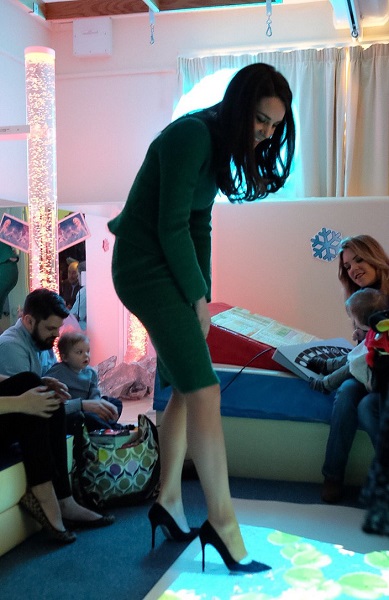 Kate then joined in on an art therapy session. During the session, Kate spoke with 4-year-old Daisy Benton, whose sister Isabella is helped by EACH, and her mother, Michala Benton, about what it’s like being a princess. Michala said afterward (from the DM linked above):

“My other little girl Daisy asked her what it was like to be a real princess and Kate said she’s very well looked after by her husband. Daisy is four and absolutely loves princesses. Kate also said about her kids that Charlotte and George run in different directions all the time. She was very down to earth and was happy to sit with Isabella.”

Kate’s go-to line for years has been that she’s very well looked after. It’s boring at this point. Get a new talking point.

Many people criticize this go-to line from Kate saying it makes her seem immature and incapable, but since that’s been talked about before I want to bring up another thing which this line makes Kate seem: privileged. And it’s not just about the fact that Kate wants for nothing and everyone takes care of her, it’s the fact that she doesn’t see how rude that would be to say to children and families who are dealing with life-limiting conditions, or underprivileged children who can’t afford to go camping, or whomever else she’s said this to. We know you’re privileged, Kate; get a new talking point.

After the tour, Kate met supporters of the hospice and got updated on the Nook Appeal. 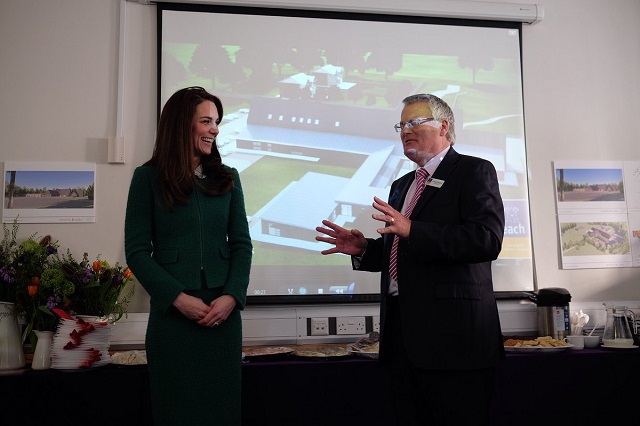 While standing in front of a crowd of donors and volunteers, Kate admitted that she was terrified to give her first speech in 2012 at the EACH hospice in Ipswich. From the Mirror:

“EACH Chief Executive Graham Butland spoke about Kate’s ‘journey’ with the charity since she became patron in 2012 after first making behind-the-scenes visits. He continued: ‘Then that journey developed into your first public speech.’ Kate smiled and interjected – ‘terrifying’ – about the speech she made at EACH’s Treehouse Hospice in Ipswich in March 2012. Mr Butland continued: ‘Terrifying, well I can tell you my former chairman was equally terrified that day.'”

Kate went green today, opting for a new skirt suit from Hobbs. Kate wore the “Sinead Jacket” and “Sinead Skirt” in Evergreen. They sold for £189 and £110, respectively, before selling out. The jacket features a collarless style with a subtle peplum, and fastens with an exposed front zip and has decorative flap pockets. The skirt is an A-line. The Telegraph reports that the jacket and skirt came out in late August 2015 and Kate must have bought it in late-2015. So she’s just been sitting on this outfit for over a year.

Underneath the jacket, Kate wore a new blouse from Gerard Darel. Kate wore the Josephine Shirt (£175). The silk shirt features a frilled collar with a black bow.

The color and zipper of the jacket and skirt remind me too much of the Erdem Allie coat which I dislike. And I can’t stand the collar of the shirt poking out over the jacket. I agree that the green of the suit needs to be broken up, but I would have rather Kate worn her hair up with a brooch, instead of the collar over the jacket. The peter pan collar is just too twee for me.

Kate wore her Kiki McDonough Morganite and Diamond Cushion Drop Earrings, for some reason (pink earrings with a green suit and black accessories?). She carried her Mulberry Bayswater Clutch in black suede, and wore her Gianvito Rossi black suede pumps.

Here is a video of Kate’s visit.

Victoria Murphy’s Mirror article (linked above) says Kate was at EACH for one hour.

PS. Kate’s next scheduled appearance is a duo act with William on February 6 when they visit a Place2Be school to kick off Children’s Mental Health Week.

PPS. Here’s a Rebecca Deacon sighting. You can’t quite tell from this photo, but she is wearing a ring on her left hand ring finger.