Prince William, Kate Middleton, and Prince Harry were out and about yesterday, December 19, for a Christmas party at The Mix, a Heads Together partner.

The Mix offers confidential support to people under the age of 25 via a phone helpline, online chat, and social media. Their website also offers advice on various topics from mental health, to money and finance, and sex and relationships. I read one of their articles and it was quite interesting and informative. I was a bit surprised to find it as informal as it was, but I think that probably works well for their target audience of people under 25.

The three younger royals were at The Mix as part of their Heads Together campaign for a Christmas party honoring The Mix’s volunteers and counselors. When they arrived, Kate was presented with flowers.

William and Harry joined a group session where volunteers and counselors shared their knowledge and have training on various issues, while Kate joined a live online chat about counseling with volunteers and young people from across the UK. 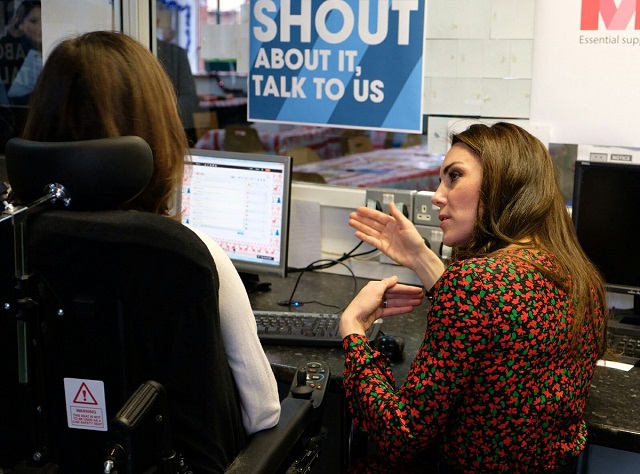 William, Kate, and Harry then chatted to young people who use The Mix’s services.

William and Kate then joined the Christmas party by making decorations and gingerbread houses, while Harry spoke to some volunteers and staff. 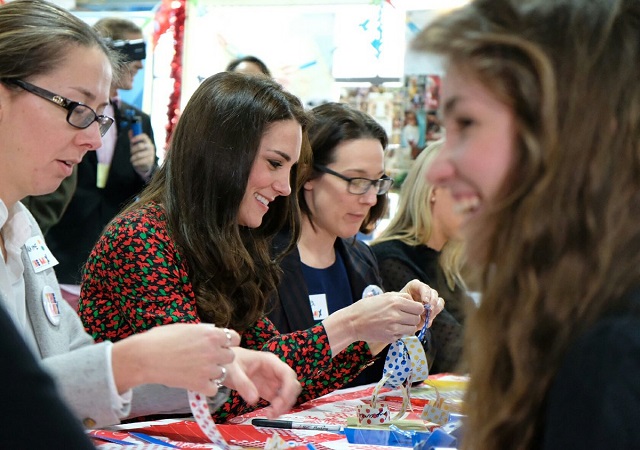 Seven of The Mix’s volunteers were presented with awards in recognition of their achievements this year supporting other young people. The royals presented George Yeorghaki with a Volunteer of the Year Award.

Here’s a video from the event.

Kate debuted another new designer for this outing: Vanessa Seward. Kate chose the “Cai floral-print silk-jacquard dress” ($623), which has red flowers and green leaves over a black background. The dress is a knee-length design with a button-fastening neckline and side slit pockets. Kate cinched in the waist with her Alexander McQueen belt we’ve seen many times.

It’s… festive? Eh, I’m not big on prints, and this doesn’t really do much for Kate, in my opinion. It’s fairly drab.

“I had a really nice chat with Prince William who told me that this was their last week at work, as it were, before Christmas. He said they were all really excited about it and that George is already opening his presents. He thought it a quite funny. That’s kids for you, even the ones that are princes.”

Am I missing something? It’s everyone’s last week before Christmas (and last week at work before Christmas if you work). As for the rest of the quote, I mean, okay. I wonder if it’s a “George found the present stash and dug in” type of thing. I did that when I was a kid; I’d go searching through my mom’s closet to find where she did my presents. I was a bit older than George, though, and did it secretly, and as far as I am aware my mom never found out that I peeked at the presents early.

Here’s another video from The Mix’s YouTube channel with more footage from the visit, in which the CEO of The Mix, Chris Martin, says:

“Heads Together’s been hugely important for The Mix, mainly because Their Royal Highnesses are so well identified with our demographics, and it’s really allowed young people the opportunity to begin thinking about mental health with talking about their mental health.”

“Their Royal Highnesses are so well identified with our demographics” Does he mean people under 25 can identify them, or identify with them? There is a big difference there.