Prince Harry wrapped up his Caribbean tour in Guyana on December 4. Harry visited Joshua House Children’s Centre – which was set up and run by members of the controversial religious cult the Moonies – where he gave an impromptu interview with the kids where he talked about what Buckingham Palace is like. Harry said he doesn’t get to spend much time there but that the Queen spends a lot of time there. He also said the food at BP is delicious.

Harry then said Windsor Castle is awesome and amazing, but there are constantly planes flying overhead. When asked about being a prince, Harry said he definitely doesn’t rule the country, and that it’s “Good and bad. There’s lots of privileges, of course, that you get when you’re born. But then with privilege comes a lot of responsibility… Being a prince means you’ve got to enhance all the positivity and try and encourage people to see the good stuff about life.”

I can’t help myself, all I can think of right now is Uncle Ben: “With great power comes great responsibility”.

Harry then attended a reception at State House with First Lady Sandra Granger where he heard the stories of young women and girls as young as nine rescued from lives as sex slaves or in domestic servitude. From the Express:

“Many were snatched from captivity by the Guyana Women’s Miners’ Organisation, a group set up to represent thousands of women working in the country’s interior extracting gold, bauxite, titanium and other precious metals and minerals. In remote mining areas, women are often mistreated, some held as forced domestic servants but many, particularly indigenous people are trafficked as sex slaves.

“The women’s organisation has set up a safe house with the Sisters of Mercy nuns. It currently houses 29 young women and girls. Its trafficking unit often sends in snatch squads to rescue the victims. ‘If we tell the police and authorities about it in advance, they tip the men off and the women have gone by the time we get there,’ said Marina Charles, head of the unit. ‘It is often dangerous work.’

“Harry met one nine-year-old girl who was raped repeatedly for two years from the age of seven by a man now aged 38. The girl, who like all the victims cannot be identified, was rescued by her brother, who killed her paedophile abuser, strangling him during a struggle to free her. He has now been jailed for 15 years. Harry, 32, also met a 12-year-old girl who has a six-month-old daughter fathered by her abuser.

“‘This is very sad. They are so young and little,’ Harry said, shocked. ‘She shouldn’t be a mother yet. She’s so young.'” 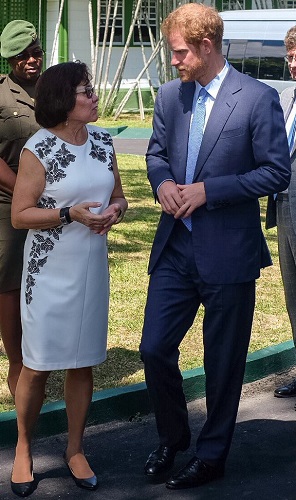 Harry’s tour came to a close as he left from Eugene F. Correia International Airport.

Harry spent the last three days of his tour in Guyana. On December 2, Day 13, Harry traveled from Barbados to Guyana, and called on President David Granger before laying a wreath at the Independence Monument. Harry also visited the Headquarters of the Guyana Defence Force and attended a reception hosted by the British High Commissioner Greg Quinn.

On December 3, Day 14, Harry visited Surama Village in the Hinterland. Harry received an official welcome from the Surama villagers, around the gathering point of the village Totem Pole, where he was presented with a headress of macaw feathers.

Harry visited the Iwokrama International Centre – whose Patron since 2000 has been Prince Charles.

Harry’s final stop was Kaieteur Falls. This waterfall is the single largest free-fall waterfall in the world with a drop of 741 feet, making it nearly five times as high as Niagara Falls.

On December 1, Day 12, Harry was still in Barbados. December 1 was also World AIDS Day, and Harry, joined again by Rihanna, took another HIV test (after his one earlier this summer) while at the “Man Aware” event at Heroes Square in the center of Bridgetown.

The Barbados National HIV/AIDS program has highlighted men as being at significantly high risk – they are more likely to be diagnosed late with HIV compared to women and are also more likely to die from AIDS-related illnesses.

To raise awareness, the National HIV/AIDS Commission in Barbados is trying to remove the stigma associated with the illness and encourage men to get tested and talk more openly about the disease.

Then Harry and Rihanna gave an interview to Camilla Tominey talking about HIV testing.

The prince and the popstar @rihanna , in Barbados, talking about HIV testing. #WorldAIDSDay pic.twitter.com/X4kkdZLNYJ

Harry then traveled to the Nature Fun Ranch in St Andrew which allows young people to speak freely with one another about important topics, including HIV/AIDS, providing them with a positive focus to guide their lives in the right direction, in a rural setting while tending to horses, working vegetable patches, or managing fish hatcheries.

Harry’s final stop was the Kensington Oval for the 50th Anniversary of Independence Military Parade where he inspected the Guard of Honour, before watching the Parade.

Prince Harry joins people from all walks of Barbadian life for the 50th Anniversary of Independence Military Parade ?? #RoyalVisitBarbados pic.twitter.com/n0shCCES0c

Camilla Tominey has a great article about her interview with Harry and Rihanna, and about Harry’s tour in general. Here’s an excerpt:

“the Prince can be a sensitive soul. As one source put it: ‘Yes, of course he loves a laugh and a joke but he is also more of a deep thinker than people give him credit for. He jokes about his own academic ability but he is actually exceptionally bright.’

“For someone renowned for his distrust of the press, Harry can be surprisingly willing to give the media exactly what they want, pictorially at least. Despite recently writing to the media accusing them of ‘crossing a line’ in their coverage of his relationship with the Suits actress, the Prince has been open and friendly towards reporters covering the tour, even inviting them to an off-the-record drinks reception in Barbados.

“An insider said: ‘Harry is acutely aware of how quickly things can be derailed so even when put in awkward positions he will play along so as not to distract from the purpose of the trip.’ […]

“His relaxed style was there for all to see. He even willingly took a picture of me with Barbadian singer Rihanna – despite the fact the Sunday Express broke the world exclusive story of his relationship with Miss Markle.

“‘Harry understands that there will be interest in his private life and was expecting the story of his relationship with Meghan to come out eventually,’ said the source. ‘What he objected to was her being harassed and her friends and family being besieged by reporters. Then there was the whole character assassination of Meghan. He knew he could improve her security but how do you protect someone from that?’ […]

“Harry has a huge amount of input into the planning of his tours to ensure the causes closest to his heart are highlighted. An aide said: ‘He goes through everything down to the finest detail. He was insistent that in every country there had to be a military, sport and youth element.'”

You can read the full piece at the Express.