Kate Middleton made her first solo trip abroad – over five years after becoming a royal and two years since she bowed out of visiting Malta. Kate was in the Netherlands on October 11 for a day of engagements including a meeting with King Willem-Alexander. 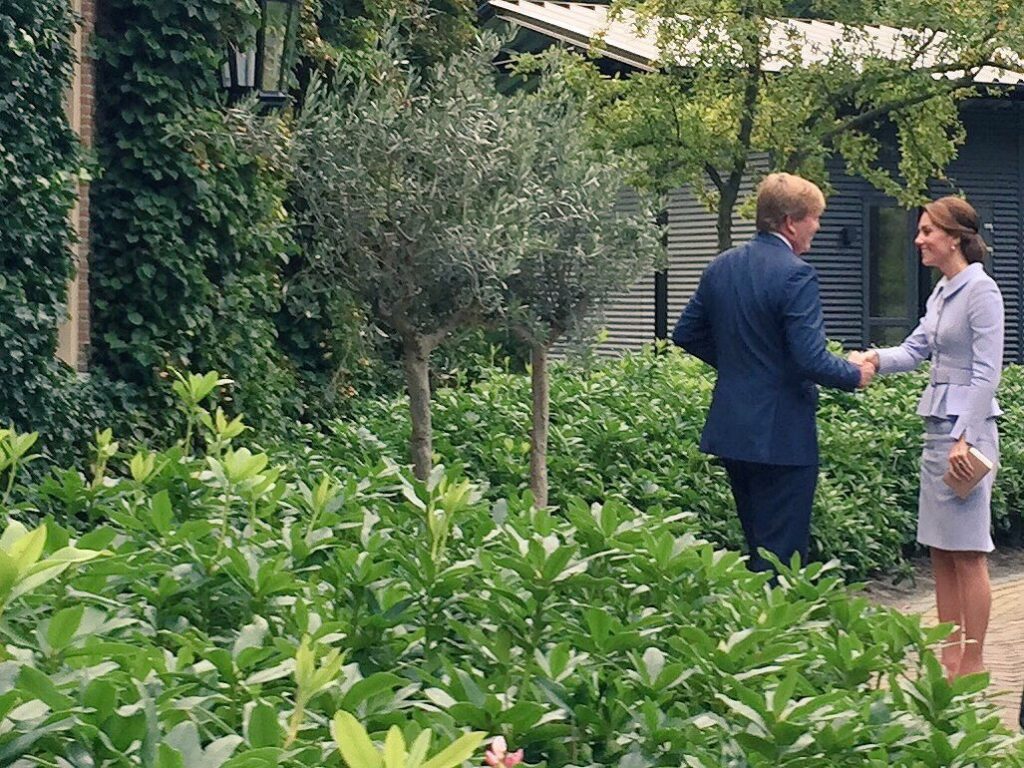 Kate’s visit has been described by several outlets as “soft diplomacy” and a bid to secure relationships with EU countries after Brexit, but royal sources say that the visit was put together some time ago after the Mauritshuis gallery invited Kate to view the exhibition of works from the British Royal Collection. The Queen’s most senior aide, her private secretary Sir Christopher Geidt, accompanied Kate on her visit, but royal aides insisted he was there as a trustee of the Royal Collection.

Sadly, I have no idea what they talked about since apparently the press weren’t invited to the meeting (aside from the customary photo op). 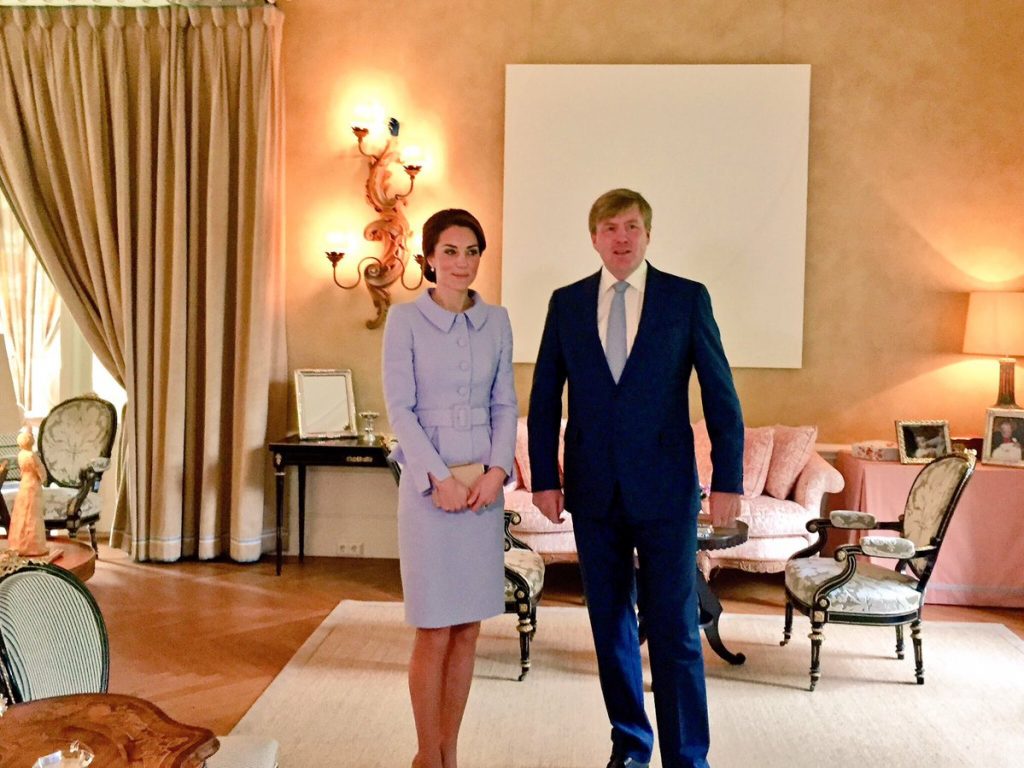 The next stop on Kate’s itinerary was the main purpose of the day: the visit to Mauritshuis in The Hague.

Upon arrival at the Maurithuis, Kate was greeted by museum director Emilie Gordenker (who wore a navy Roksanda Ilincic Ruffle Turlin dress which retails for $1,725).

Kate stopped briefly to speak to a few schoolchildren who had come out to see her, but don’t be fooled by the photos, she only greeted a handful of the kids and ignored the rest as she walked inside.

Kate was at Mauritshuis to view the exhibit At Home in Holland: Vermeer and his Contemporaries from the British Royal Collection which runs from September 29, 2016–January 8, 2017. From the exhibition website:

“The British royal family owns one of the finest collections of Old Master paintings in the world. The collection was brought together over many centuries by successive monarchs. The paintings normally hang behind closed doors in Buckingham Palace and other royal residences. The Mauritshuis has the great privilege of showing twenty-two of them for the duration of this exhibition.

“The famous Royal Collection, held in trust by Her Majesty Queen Elizabeth II, contains highlights from the oeuvres of famous painters such as Gerard ter Borch, Gerrit Dou, Pieter de Hooch, Gabriël Metsu and Jan Steen. The works selected for this exhibition are all genre paintings by Dutch artists of the Golden Age. Here is life as it was lived: peasants fighting, ladies and gentlemen flirting, loving mothers and common shopkeepers.”

Kate was given a private tour of the gallery by museum director Emilie Gordenker including the permanent exhibits of the Dutch Masters including works by Paulus Potter, Carel Fabritius, and Johannes Vermeer, before viewing the Royal Collection exhibit.

Among the paintings Kate viewed were “The Goldfinch” by Carel Fabritius, and of course “Girl with a Pearl Earring” by Johannes Vermeer.

Kate wore pearl earrings for her Netherlands visit so of course the press were all about “The girl with the pearl earrings viewing Girl with the Pearl Earring”. Planned? Probably. The Express said it “appeared to be a carefully choreographed piece of royal theatre”. And apparently she told fans that “Girl with a Pearl Earring” is her favorite painting in the Mauritshuis gallery.

You can totally see a bobby pin sticking out from Kate’s updo in this photo.

Kate says something about one of the paintings in this video at about 0:30-0:35. I turned my volume all the way up on my computer and I still can’t make out what she says.

While at the gallery, Kate visited the Art Workshop where children were having a painting lesson.

Director Gordenker said in a statement: “We are delighted that her Royal Highness paid a visit to the Mauritshuis. It was a very special experience to show her the renowned permanent collection as well as the exhibition.”

Kate’s next event was a Learning Exchange Seminar on addiction and its impact on family mental health at the residence of the British Ambassador to the Netherlands, with representatives from Action on Addiction, Anna Freud Centre, and Trimbos-instituut.

I am not aware of reporters being there for the discussion, so I don’t know if Kate actually said anything, but KP did release a press release which said, in part:

“The Duchess of Cambridge will join a roundtable on the theme of early intervention, focussed on how to protect children who are affected by parental addiction and mental health problems within the family. … Addiction and family mental health are two important issues which The Duchess has been working on for some time and Her Royal Highnesses was keen to shine a spotlight on the import at work being carried out in this area.”

I did not bother to correct KP’s mistakes. My god, whoever writes KP’s press releases needs to proof read their stuff.

Also in the press release were statements from the Chief Executives of the three organizations which took part in the discussion. I’m not going to quote their entire statements, but I do want to focus on parts from two of them.

The Chief Executive the Trimbos-institute said: “We are very pleased that The Duchess will use her visit to the Netherlands to raise more awareness for the vulnerable position these children are in.”

The Chief Executive of Action on Addiction said: “We are grateful to The Duchess for continuing to shine a light on the cross cutting and often misunderstood subjects of mental health and addiction.”

I take issue with these two sentences and KP saying “Her Royal Highnesses was keen to shine a spotlight on the import at work being carried out in this area” because no she didn’t. I was actually really looking forward to this specific event because I wanted to hear what Kate had to say about mental health and what she brought to this discussion, but the press weren’t even there so I have no idea what she said. Kate didn’t highlight mental health, she highlighted the fact that she wore pearl earrings to view “Girl with a Pearl Earring”. That’s the headline to come out of this visit, not mental health.

Kate’s last engagement of the day was in Rotterdam at Bouwkeet, which is a makerspace of Bospolder-Tussendijken open to all residents especially young people age 10-15. It’s a creator space where people can work on projects in different areas from wood and metal working to programming and robotics which is designed to combat high rates of crime and unemployment in the area by teaching kids practical skills.

Kate had a short briefing on why this workspace is so important to the local area before touring the space and meeting with local craftspeople who share their experience with local kids in various subjects.

Kate visited a bicycle repair workshop where she helped out by holding the bike while the children adjusted the wheels, brakes, and gears. Kate was even willing to shake people’s dirty hands.

“Richenel Lensa, 47, a welder from Rotterdam, who volunteers at the centre, led the bike refurbishment class and said afterwards: ‘When I met her I told her my hands were dirty but she still shook it and said ‘sometimes my hands are dirty too.’ The kids are very happy to see that someone important has come here to see what they are doing – it’s great for the kids. They were so excited to see the Duchess they wanted to keep their work gloves that she shook even though they’re covered with grease.'”

Kate visited the robotics room where joined children making Lego robots and had a go at getting one to race along the floor. Kate also watched 9 year old Driss Ben Mira demonstrate a large robot he made called Meganoid. The robot waved its arm and Kate said, “That’s amazing”, before shaking the robot’s hand.

Kate also visited a woodworking class and a knitting class where she attempted to put on one of the knitted hats but didn’t end up putting it on.

The earrings are interesting, though. We got confirmation that these Diamond Stud and Pearl earrings are on loan from the Queen. Kate debuted them on day 2 of the Canada tour, but Sophie, Countess of Wessex wore them in 2012 to the Luxemburg Royal Wedding, and the Queen wore them during her Silver Jubilee.

Finally confirmation those earrings are indeed on loan from HM The Queen, since 2012 I tried to confirm this pic.twitter.com/aJX1jSyWz0

Interestingly, while Kate may have taken her earring cue from Vermeer, she was channeling Princess Diana with her pale blue skirt suit and nude shoe combo.

BTW, The Queen and Prince Philip will give a reception at Buckingham Palace for Team GB and ParalympicsGB medalists on October 18 with Prince William, Kate, Prince Harry, Princess Anne, Prince Andrew, and Princess Eugenie joining them.

Here are two more photos from the gallery.