Prince William and Kate Middleton at Stewards Academy for Heads Together 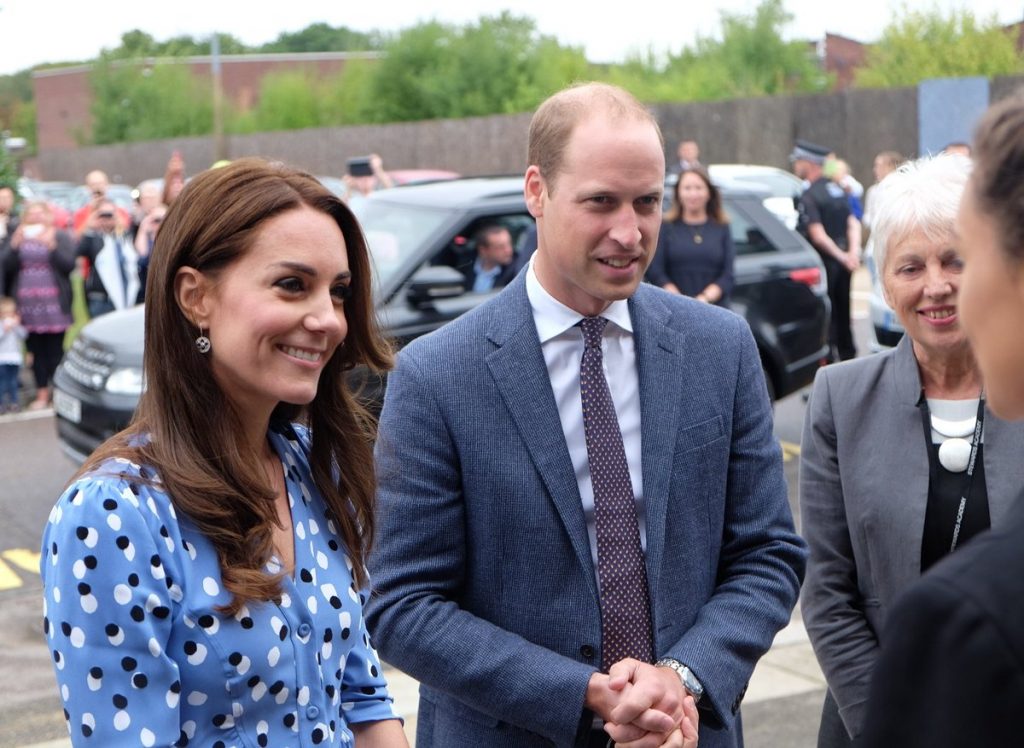 William and Kate arrived at Stewards Academy in Harlow, Essex and were greeted by local dignitaries and children from the school. The day began with 72 year old Vice Lord Lieutenant of Essex Jonathan Douglas-Hughes falling flat back during the greeting. William rushed to help him while Kate stood where she was.

William and Kate then sat in on a class where the topic of discussion was changes the students have faced. When he walked in, William joked that he was “absolutely terrified” to be back at school.

The children revealed some of the biggest changes they’ve had to cope with in their lives:

Kai, age 12: “My big change was when my swimming coach left and I was anxious about who would be my next one.”

Myles, 12: “My cousin really supported me when I was badly bullied and now I’ve moved to secondary school it’s much better.”

Seven, 12: “My biggest change was my brother dying, it was really hard but coming to school really helped and playing golf.” 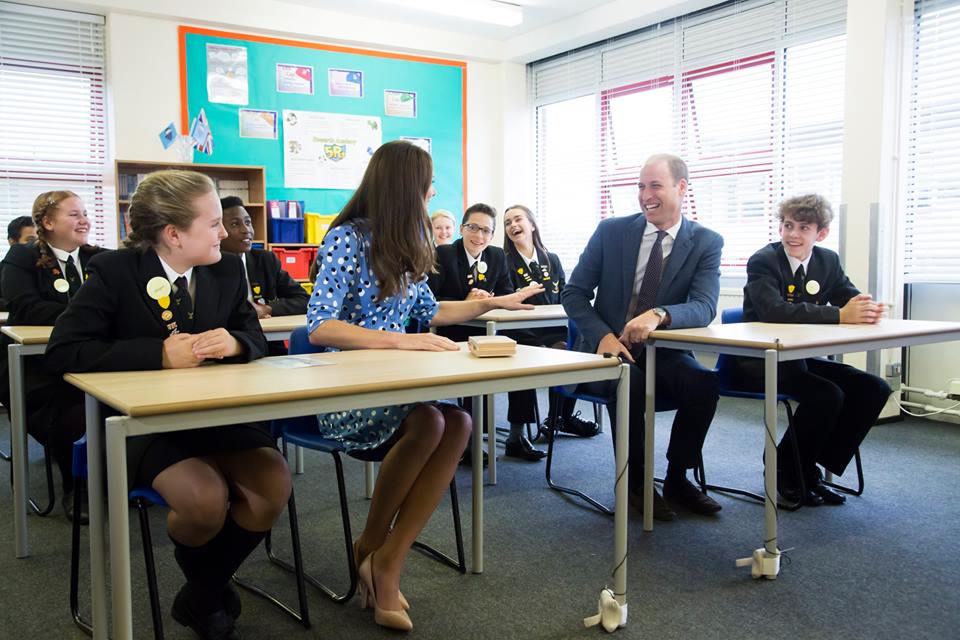 Afterward, William said: “I think you should all be leading the Heads Together campaign, seriously. You are all incredible mature and speaking such sense. It’s fantastic to hear. If that’s come from the school then brave to the academy for encouraging you to embrace that. Thank you for sharing those stories with us as well.”

Here’s a video of Kate clapping that I was asked to include. It also includes William’s statement above, and Kate adding: “And it’s so powerful because … so thank you so much.” She speaks so softly and her head is turned so I can’t hear the middle bit.

Video: William and Kate were hugely impressed by what they saw and the kids they spoke to @StewardsAcademy pic.twitter.com/ICKlkeJElv

After the classroom lesson, William and Kate attended an assembly where William gave a speech. He said:

“Catherine and I are really impressed by what we have seen of Stewards Academy, as we’re both strong believers in schools where the emotional wellbeing of young people is nurtured and protected just as much as your learning and academic skills. It is particularly good to see the role played in this positive culture by Place2Be, a charity that is in the team that is part of our ‘Heads Together’ campaign.

“Catherine, Harry and I have decided that we can use our positions to make a difference on the subject of mental health. It should not be a taboo subject in the year 2016. So, the Heads Together campaign is all about getting people talking about the difficult times that many of us will face and have faced in our lives. Talking can make us realise that we’re not alone. The opposite of talking is isolation and fear. Sometimes getting something off your chest is an important step in coping with a situation – so you know that you’re not alone, you’re not failing, and that it is perfectly normal to feel overwhelmed or sad at times. Everybody does.

“To be honest, if we could end the old fashioned idea that feeling down is something to be ashamed of, something that you shouldn’t burden others with, we would make our society a much happier and healthier place. Everyone needs someone to turn to – even if it’s an anonymous phone line or web chat service; or a friend, teacher or family member. Someone who you can trust. That’s what we are working towards – we know it’s a big ambition, but we think it’s very, very important.

“One moment that our campaign wanted to recognise was how tough it can be when young people go through major changes in their life – such as moving schools. For many of you who have just made the move, this will have been a positive and happy experience. But for some, it is hard to move from the comfort of a school that you know, surrounded by friends, to one that is new, unfamiliar and so much bigger. So, Catherine and I were really pleased to learn about your buddy system just now, and we hope it means that you have a happy and fulfilling time at school. We hope that it helps bring about a habit in your life of turning to someone when you need help, as that will be just as important to your adult lives as academic success.

“One final word – about your parents. The Heads Together campaign is for them, too. We know that parents sometimes don’t know how to help their children open up and talk about difficult times. Heads Together has today published, on its website, some top tips for parents – to help them talk to their children about big changes you may be going through. We hope this is helpful.

“So thank you, Stewards Academy, for supporting the Heads Together campaign. When we get our Heads Together – when we talk to one another – we can get through the big changes together and achieve great things. Good luck, all of you, this school year.”

William also wrote a blog post for Heads Together in which he discusses the same themes as his speech – with some of the same wording. You can read his blog post here.

After William’s speech, he and Kate listened to others give speeches. 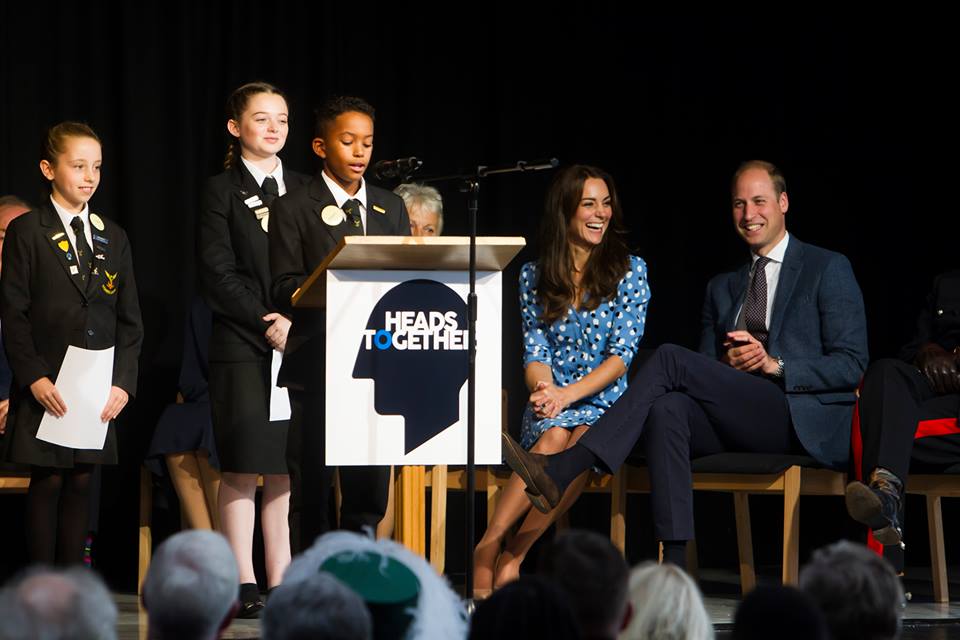 William and Kate were greeted by the students and walked around outside chatting with them.

The final part of the day was a group discussion with parents of Stewards Academy children who have been helped by the school and Place2Be.

During the discussion, William joked about still feeling like he’s 16:

Kate spoke words during the parent discussion. She asked a question of the group. From Rebecca English’s video, I can make out Kate saying: “… like more support for yourselves so there’s your children, do you feel you’d like to get more support whether it’s advice or whether it’s people you can turn to, do you fe- dealing with things…”

Video: William and Kate with parents @StewardsAcademy – and Kate does speak! Normally she defers to William… pic.twitter.com/e1028hN9Vi 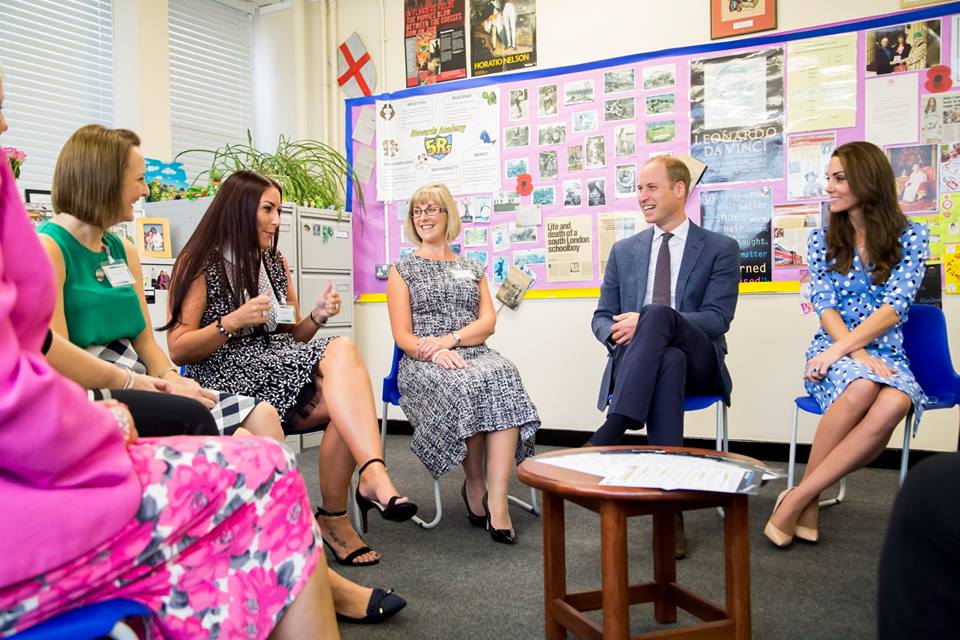 Dr. Fiona Pienaar, Director of Clinical Services at Place2Be, spoke to HELLO!, but I can’t find that article so I’m quoting the DM quoting HELLO! (article linked above):

“Catherine has been an absolutely fantastic patron and since the Heads Together campaign has come together that has really raised the profile even more of mental health. Having met Catherine on a couple of occasions, she’s so knowledgeable about mental health and they are really passionate. I just think it’s marvellous what they are doing. I have been in situations where she’s in a small group asking questions and it’s clear that she understands the impact of mental health and early intervention so that you don’t get to a stage where young people need more specialised support and they are having mental ill health.

“The other thing she does really well and I think they both do – you could see it on the stage – how they talk to young people and they share their experiences and I think that that shows how they really connect with young people. I imagine having their own children has also brought issues to the fore for them. I like the way the Heads Together Campaign is covering eight charities covering everything from early childhood and pregnancy right through to Harry and his returning servicemen.” 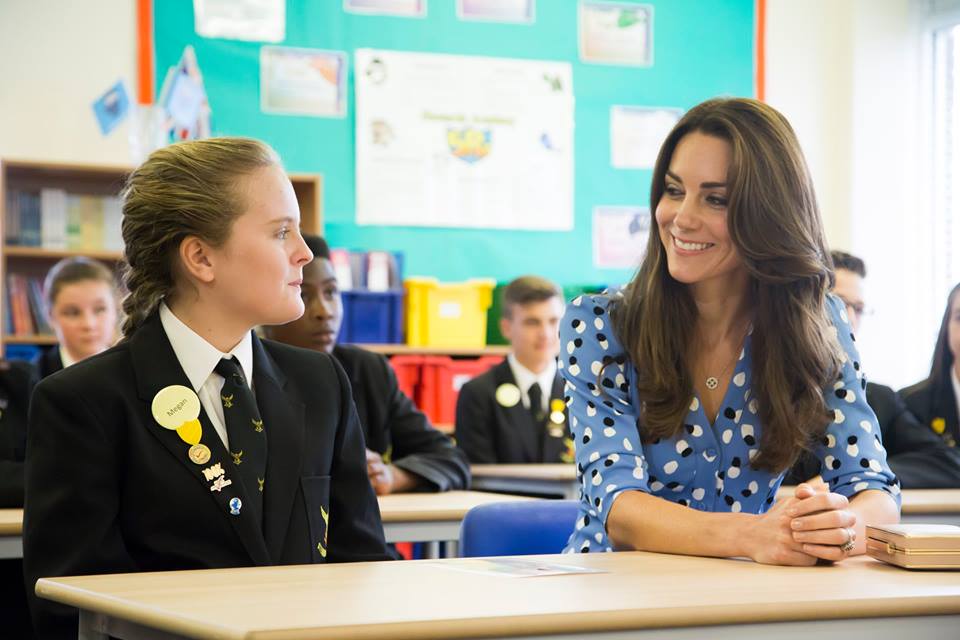 I’ve thought about what I was going to say about the children opening up, William’s comments, and this visit in general for several hours now. And I realized that there is no way for me to discuss it without my comments coming across as angry. Because that’s what I was when I was 12 and moved states & changed schools and had the only students I had met insult & shun me: very, very angry. It was not Sadness or Fear controlling the console in my mind, it was Anger.

So I’m going to say that it is very brave of the children to open up, that I hope this helps people; but that this visit and William’s comments would not have helped me due to lack of understanding of what I was actually going through (No mention at all of children being angry at having to change schools? No mention at all of children not actually having a support network to turn to because they literally know no one in the new school?), so I’m bowing out of the conversation because all it will result in is angry comments. So yeah, anyway, I need to stop commenting now.

Kate debuted a new-to-her designer today: Altuzarra – a French-born designer who works and shows in New York. She wore the Altuzarra Aimee Polka-Dot Button-Front Dress in Blue (which retailed for $2,150). It’s a light blue color with white and black polka dots, a V neckline, buttons down the front, a slit on the side, and some odd bib-like ruching on the front. 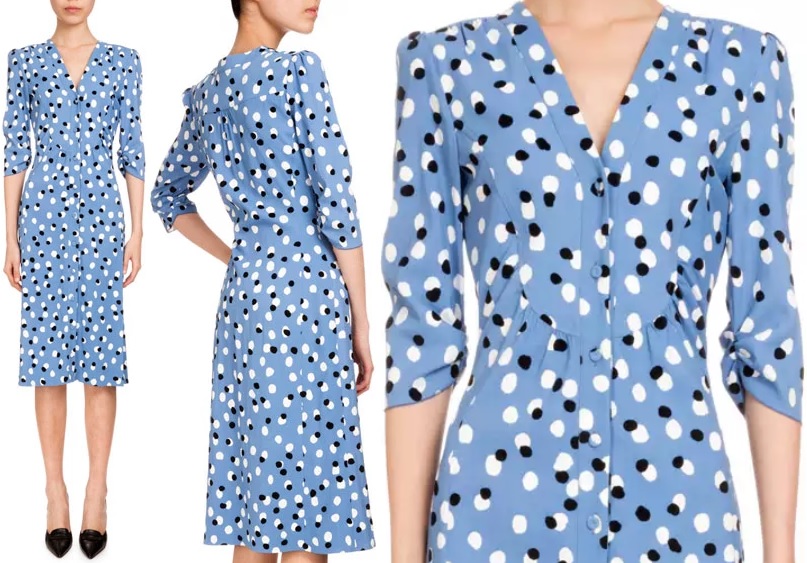 I don’t particularly care for this dress – it’s too smock-ish to me, like something one would wear while painting on a lazy Saturday. It definitely shouldn’t cost over two thousand dollars. Oh and Kate was totally wearing a giant padded bra in Cornwall. She wasn’t today.

Here is a video of William helping the fallen Vice Lord Lieutenant.

Here’s a video of William’s speech.