Prince William and Kate Middleton have officially started their royal tour of India. They touched down in Mumbai this morning (April 10) and headed straight to their hotel to pay tribute to the terrorist attacks which took place there, before heading off to play cricket with children from charities in the Mumbai slums. The Duke and Duchess of Cambridge then visited Banganga Water Tank.

PS. I will cover the gala dinner later. Please no threadjacking. Thank you. 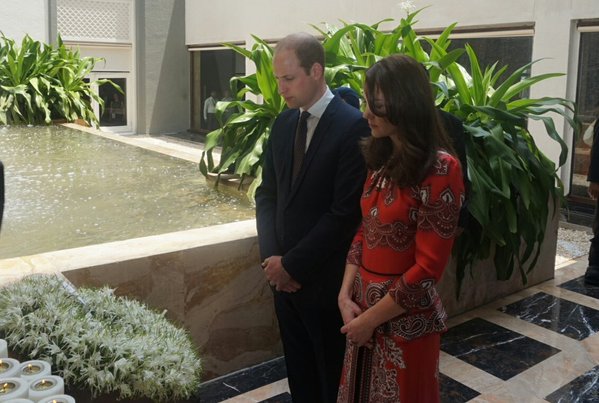 They then met with hotel staff who helped protect guests during the attacks. William and Kate were given frangipani and rose garlands as they arrived. 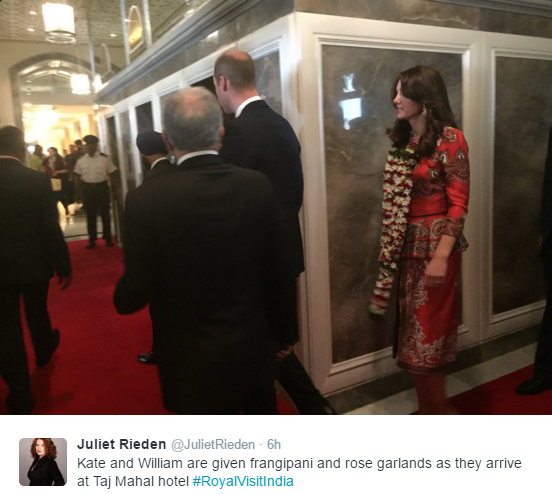 William and Kate ate lunch at the hotel before heading out for the rest of the day’s program. They had a lunch of vegetable kebabs, lentil curry and rice, ricotta cheese, and okra prepared by the Taj Mahal Palace Hotel chef Raghu Deora. He said: “It is all vegetarian because I was told that was what they preferred.”

Kensington Palace released a statement on behalf of William and Kate about the Kollam fire which reportedly killed 100 people: “Upon their arrival this morning The Duke and Duchess of Cambridge were informed about the tragic fire in Kollam. Their Royal Highnesses are saddened by the news and send their thoughts to all who are assisting the victims.”

Kate wore a customized version of Alexander McQueen pre-fall 2016 collection. This look is… not for me. I don’t even like it on the model. There’s just too much clashing pattern going on for me. While McQueen has made some really nice bespoke pieces for Kate over the years, in general I’m not a huge fan of McQueen’s designs. So, not for me. One positive thing I will say is that Kate is one of the few women who can actually pull off a peplum. 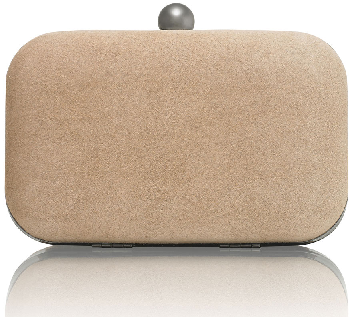 Next, William and Kate moved to the Oval Maidan park where they met children from local charities as well as cricket player Sachin Tendulkar. 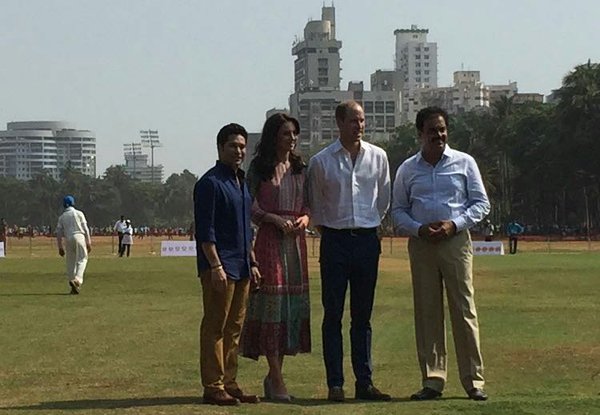 Here’s a video of Tendulkar talking about William and Kate. He calls them “humble” and “simple”.

William and Kate met with children from Magic Bus, Childline, and Doorstep and they played sporting games and cricket. The couple also tried their hand at learning some Hindi. 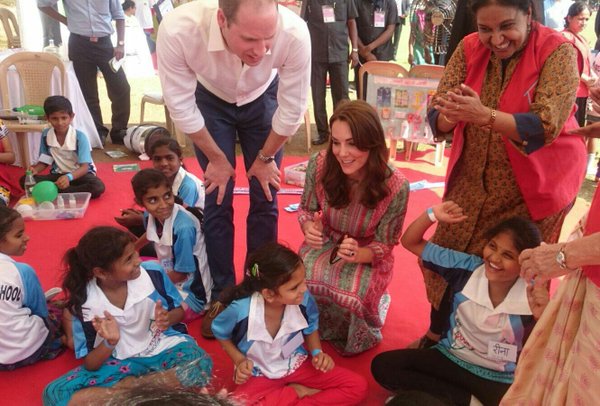 William and Kate also took a bus tour around Mumbai with children from local charity Apnalya. 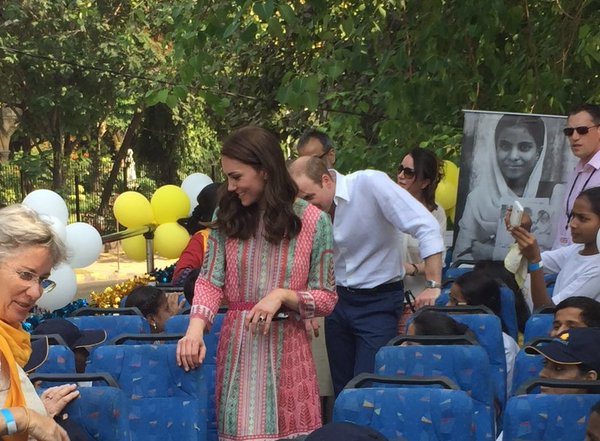 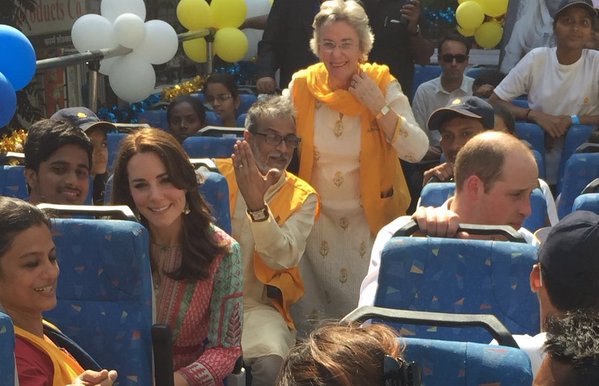 Next, the Cambridges moved to Banganga Water Tank where they were presented with garlands on arrival and scattered petals in the water.

William and Kate then toured the Banganga community where they met with women from the Smile Foundation who were making crafts. They toured the slums and met with the people living there, and played a little bit of football. 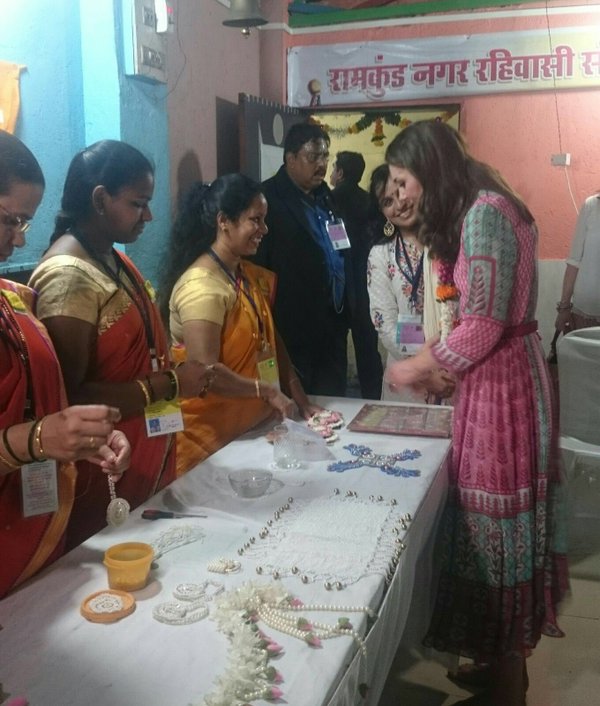 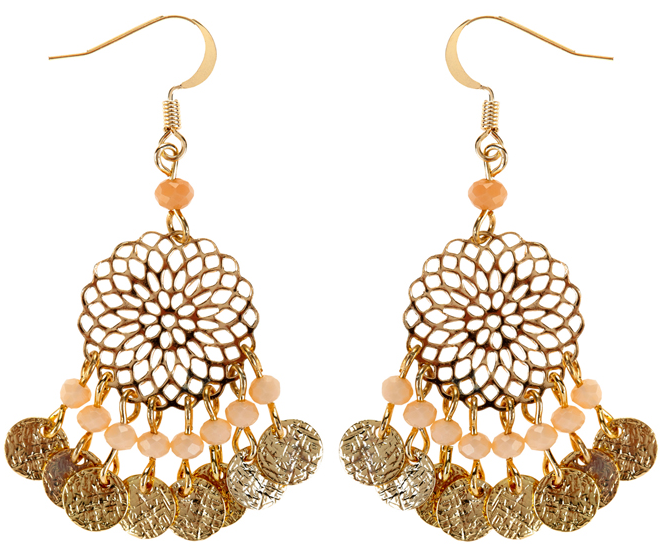 I wouldn’t say this is one of my favorite Kate dresses of all time, it doesn’t even make the top 10, but I do like this dress for what it is: a nice, light, summer-y dress to be worn during hot weather which pays respects to the host country. I like the color combination, too. I could see myself wearing something like this during summer while running errands when it’s much too hot and I’m much too lazy for jeans.

I would pair the dress with a flat if it were me, but I don’t mind Kate’s wedges too much. People have gotten on me loads of times about my hatred for those Stuart Weitzman Wedges of Doom, but the main reason that I dislike them is they are giant and make Kate’s feet look giant. These ones aren’t as big, so they’re okay I guess. Wedges for running around playing games, maybe not the smartest choice. I’m honestly shocked she didn’t land wrong and break an ankle (I’ve twisted an ankle walking normally in flip flops).

Oh, yeah, William was around, too.