Well, Prince William and Kate Middleton have finished their seven day royal tour of India and Bhutan. The Duke and Duchess of Cambridge capped off their tour by visiting one of the most tourist-y tourist attractions around: the Taj Mahal. And, like everyone has been speculating since this tour was announced, they sat on the same bench Princess Diana sat on, alone, all those years ago.

Why did William and Kate do the “Diana” photo op? Because that’s what all tourists do, of course!

A spokesman said: “They made the decision because it is what all visitors to the Taj Mahal do – they sit on the bench with the perfect symmetry of the building behind them. They got a brief glimpse of the Taj from their hotel earlier and were visibly excited. They couldn’t wait to get down here and experience it for themselves. Like everyone visiting this magical and beautiful place, they want to have a unique experience to remember forever.”

I’m not even going to try and pretend that if I visited the Taj Mahal that I wouldn’t take the exact same photo, because, well, that’s what tourists do. This entire jaunt to Agra and the Taj Mahal was really just so William and Kate could be tourists. That’s it. It served no other purpose. But it’s a great photo op!

But while we’re busy remembering Princess Diana (and posting old photos of her), William, like, totally isn’t you guys.

A source close to the couple said: “For the Duke of Cambridge, his mother’s visit to the Taj Mahal is not a particularly strong memory at all. He has many other memories of his mother that are much more important to him. The visit was about creating new memories for their family.”

While the couple did the public photo op, they toured the Taj Mahal privately. When they came out, William was asked what the visit meant to him. He said: “It’s a beautiful place, stunning designs in there.” Kate added: “It’s been really incredible to learn about the romance of the building and really beautiful architecture.”

Known at the ultimate monument of love, the Taj Mahal (Arabic for “Place of the Crown”) was commissioned in 1632 by Mughal emperor Shah Jahan a a mausoleum for his favorite wife, Mumtaz Mahal (Arjumand Banu Begum). The mausoleum was completed in 1643, with the entire complex – which includes a mosque, a guest house, and formal gardens – completed in by 1653. The Taj Mahal was designated a World Heritage Site in 1983 for being “the jewel of Muslim art in India”.

Princess Diana visited the Taj Mahal alone in 1992, Prince Charles visited alone (because he was still a bachelor) in 1980, and Queen Elizabeth and Prince Philip visited together in 1961.

If we needed any more proof that this trip is not much more than a 5th wedding anniversary trip, here’s an excerpt from the Daily Mail:

“Tour guide Rizwan Mohammed, 35, said he wished them a happy 5th wedding anniversary for the 29th April, adding : ‘They were shocked that I know about it, but you know the internet. But then she said this is the perfect thing to do before their wedding anniversary. She was quite happy about it.’

“Asked if it was a ‘romantic day for them’, he said ‘absolutely’. They were fascinated ‘by the story of the king and the queen’ and the love that made him build the monument to her.

“And Kate got ‘quite emotional when she came to know that the Queen died at the very young age of 39. ‘She said ‘she really deserves this kind of building as they were madly in love with each other.'”

Kate finally wore another Indian designer: Naeem Khan. She wore a dress from the Resort 2015 collection which is white with blue embroidery. Kate’s has been altered to add an extra row of design on the end to make it longer. 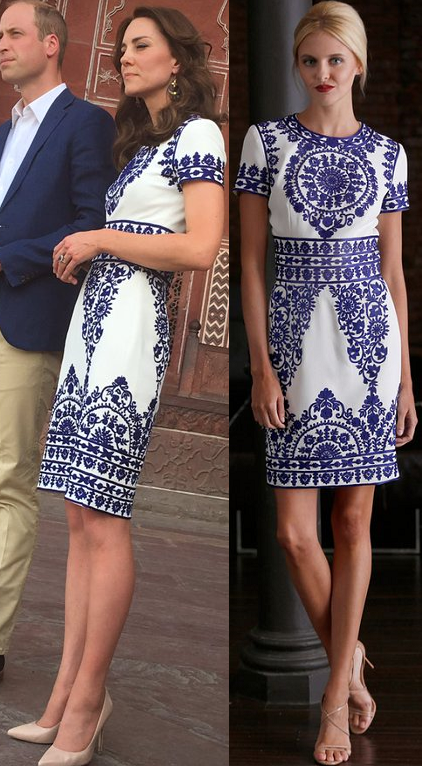 Kate opted for her LK Bennett “Fern” pumps again (these are going to replace the Sledges aren’t they, in that we will see them a million times from now on). She also wore the Bhutanese earrings she purchased yesterday during the hike to Tiger’s Nest. 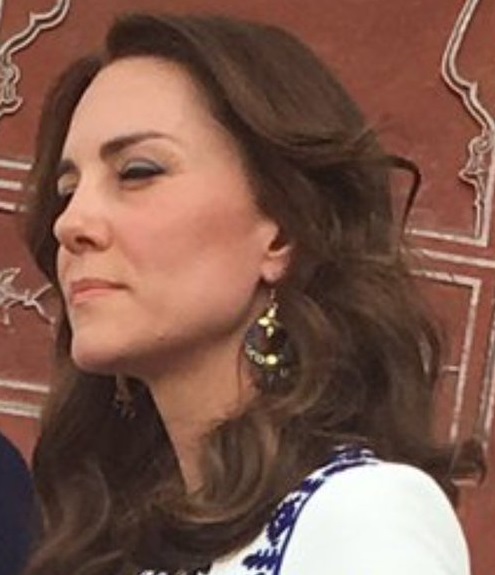 KP posted these photos on Twitter with the caption: “TRH want to say thank you to the people of India for their hospitality and warmth.” 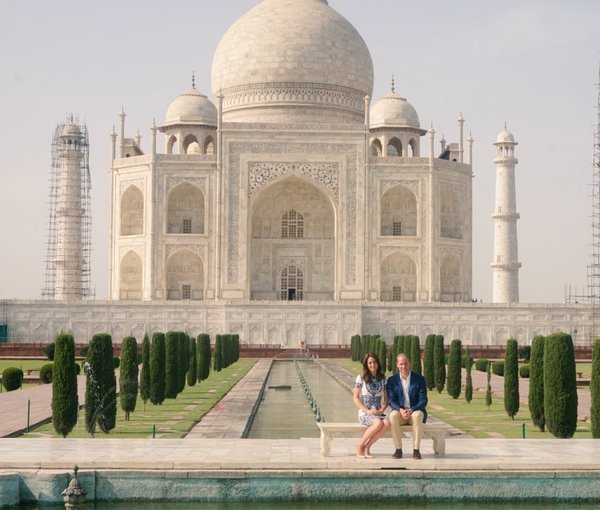 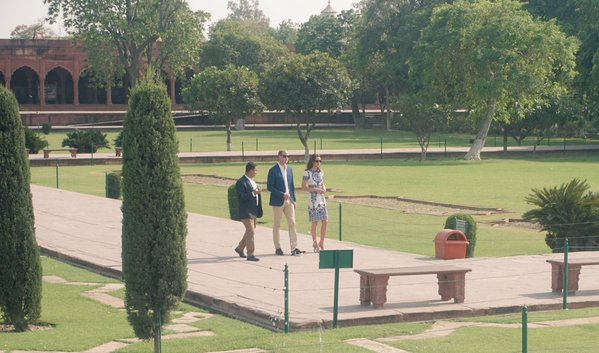 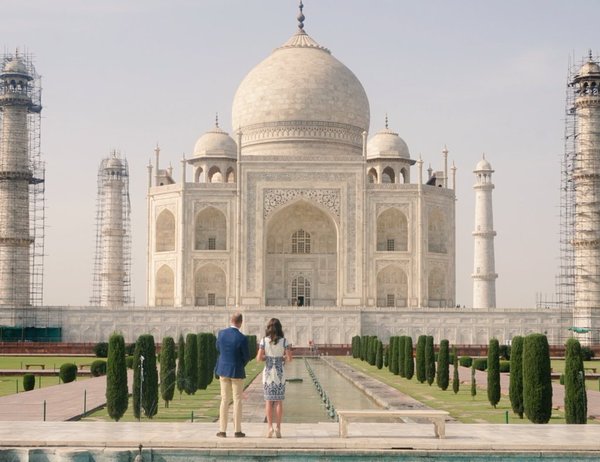 Earlier in the day, for the flight to India from Bhutan, Kate repeated a white, broderie anglaise two-piece from Alexander McQueen she first wore in Singapore in September 2012. I am so happy she rewore this. I loved this outfit when Kate first wore it, I’ve wanted her to repeat it for ages, so yay!

Kate carried her LK Bennett “Natalie” clutch and wore her “Fern” pumps. I think the nude accessories kind of wash the whole look out a bit, but I still love the McQueen.

Kate wore a new necklace while leaving Bhutan. It was a gift to her from Queen Jetsun. The symbol is one of the eight auspicious symbols in Buddhism. This one is the Auspicious Drawing which symbolizes “complete union of wisdom and great compassion.” 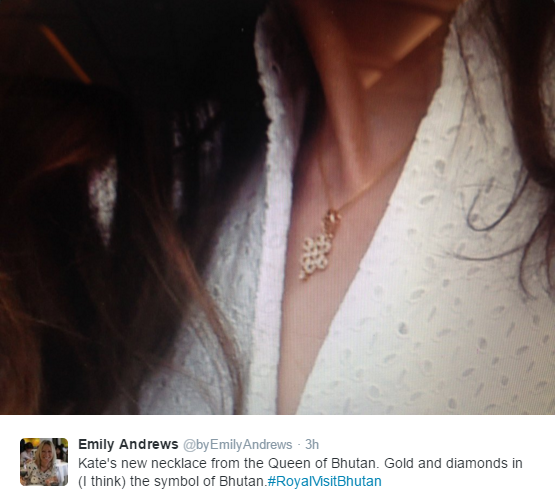 The plane flew by Mount Everest on it’s way from Bhutan to Agra. 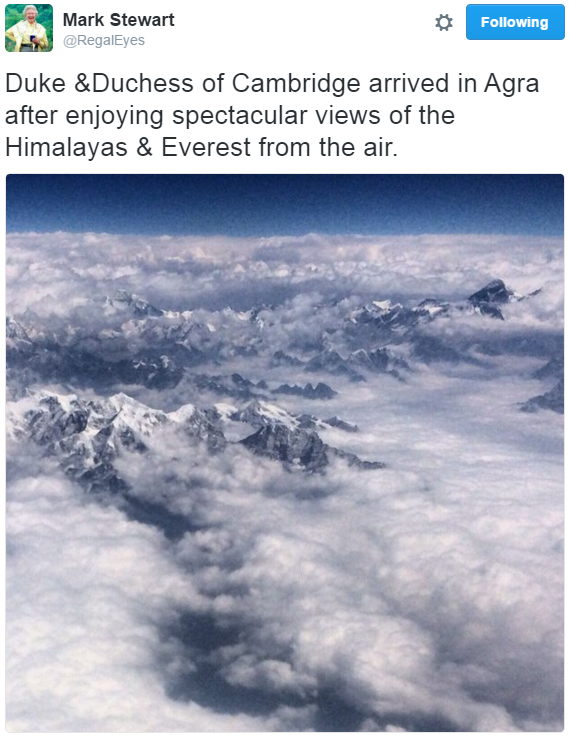 That’s all folks! The tour is over. Coming up this week will be posts on Crown Princess Mary, Countess Sophie, and the naming (finally) of the King and Queen of Bhutan’s son. Until then, I’ll leave you with some more photos from the Taj Mahal.