I am splitting up the remainder of Prince Harry‘s royal tour of South Africa into two posts. One is about his visits and speeches, and one is about the personal photos he released during the tour. This post is about the photos Harry released.

To coincide with his official visit to South Africa Wildlife College near Kruger National Park, Harry released a series of photos and videos from his time working on conservation this summer in Africa and wrote a caption for each. 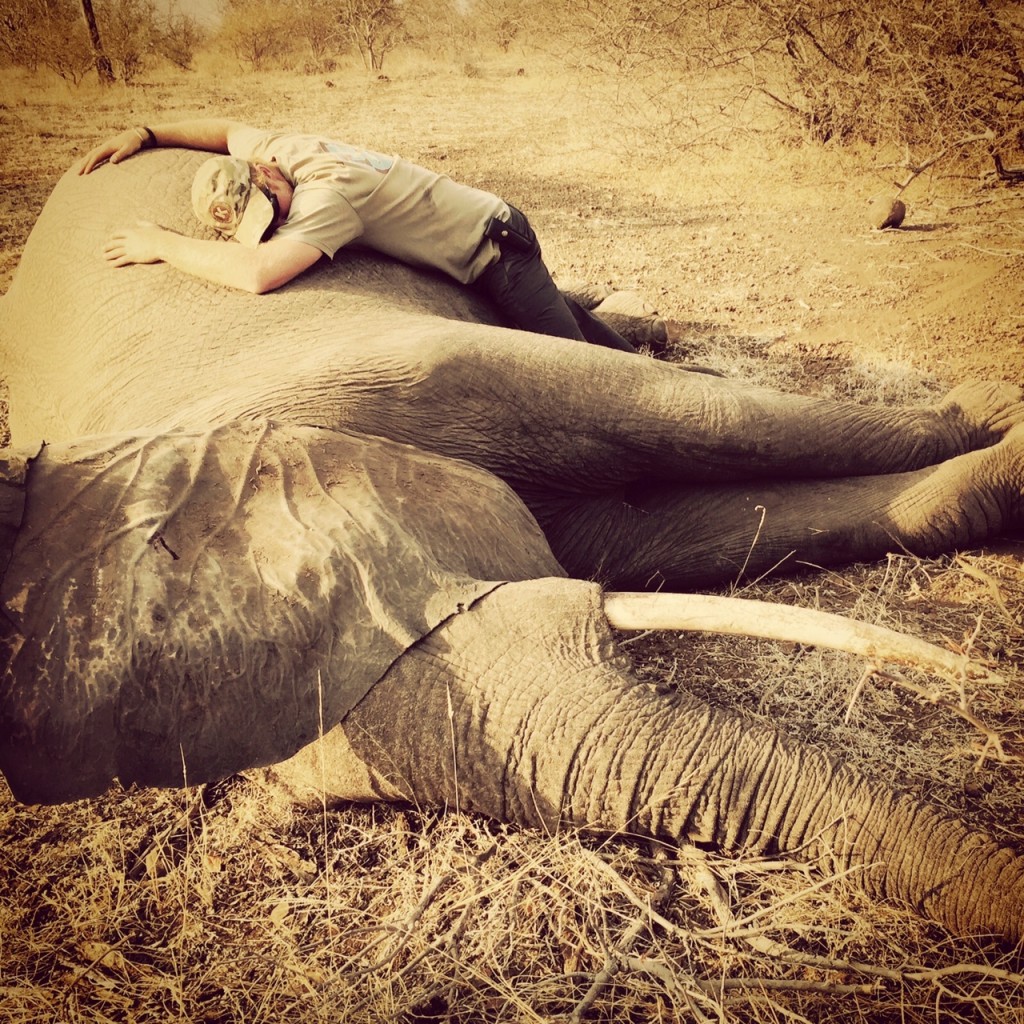 For the above photo, Harry wrote:

“After a very long day in Kruger National Park, with five rhinos sent to new homes and three elephants freed from their collars – like this sedated female – I decided to take a moment.

“I know how lucky I am to have these experiences, but hearing stories from people on the ground about how bad the situation really is, upset and frustrated me. How can it be that 30,000 elephants were slaughtered last year alone? None of them had names, so do we not care? And for what? Their tusks? Seeing huge carcasses of rhinos and elephants scattered across Africa, with their horns and tusks missing is a pointless waste of beauty.” 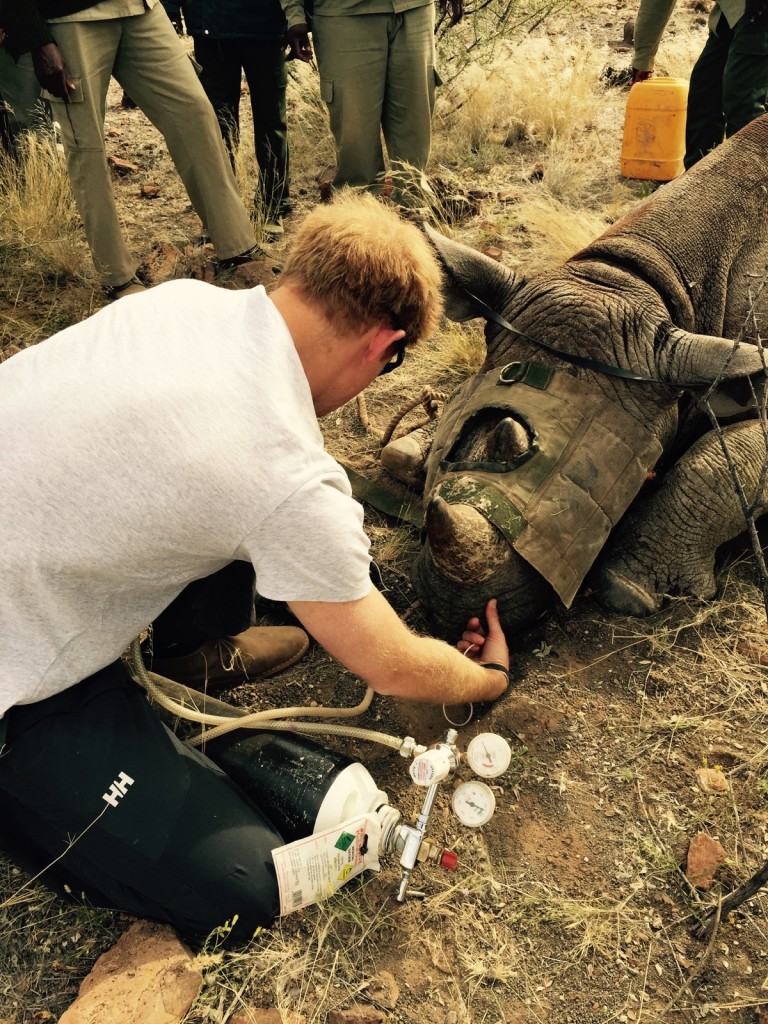 Harry wrote of this photo:

“I was working with Dr. Mark Jago and Dr. Pete Morkel in Namibia. Some countries are de-horning small populations of rhino to deter poachers from shooting them. It is a short-term solution and surely no substitute for professional and well-trained rangers protecting these highly sought-after animals. De-horning has to be done every two years for it to be effective and can only realistically be done with small populations in open bush. My initial task each time was to monitor the heart rate and oxygen levels and help stabilise them as quickly as possible. My responsibilities then grew to taking blood and tissue samples and the de-horning itself.”

To learn more, visit Save the Rhino. 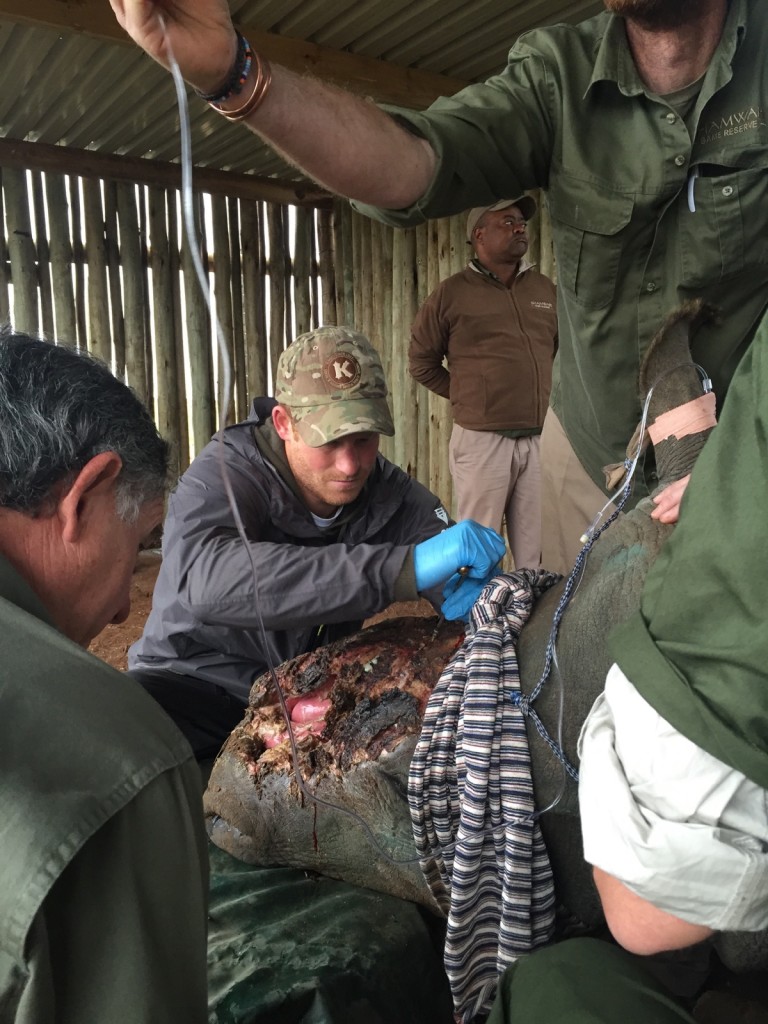 This story behind the above photo:

“By this point many people will have heard of ‘Hope’, a young female black rhino that was brutally wounded by poachers in the Eastern Cape of South Africa. This was the second operation to try to save this animal’s life.

“Some poachers use a dart gun and tranquilize the animal so as to not have to fire a shot that would be heard. They then hack their face off while the animal is paralysed before running off with the horn. Local communities saw her stumbling through the bush and then alerted the authorities. Thanks to Dr William Fowlds and his team, Hope survived and is making a speedy recovery. I stared into her eyes while operating on her and thought at first that it would have been better and fairer to put her down rather than put her through the pain. Afterwards I was told of another female called Thandi who was in a similar state in 2012. She now has a baby calf called Thembi.” 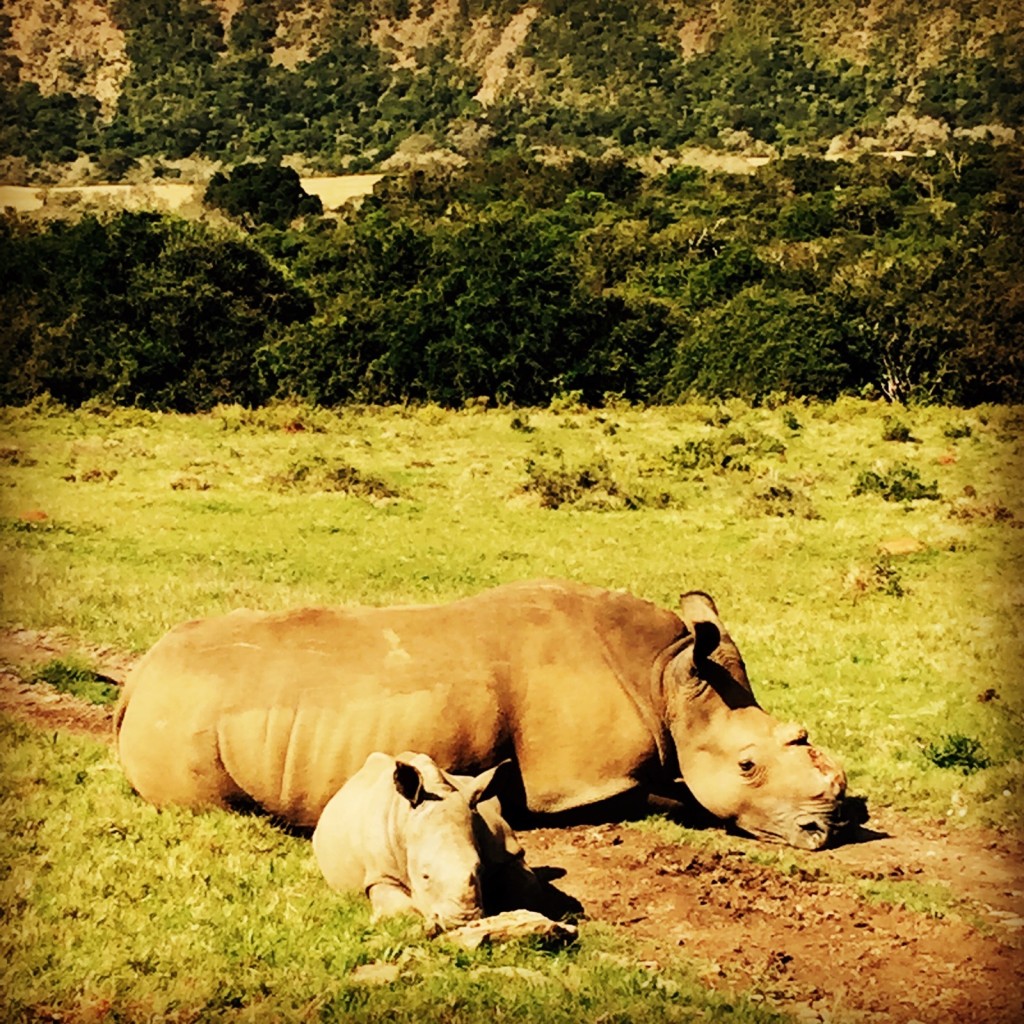 The above photo is of a healed Thandi and her calf, Thembi. 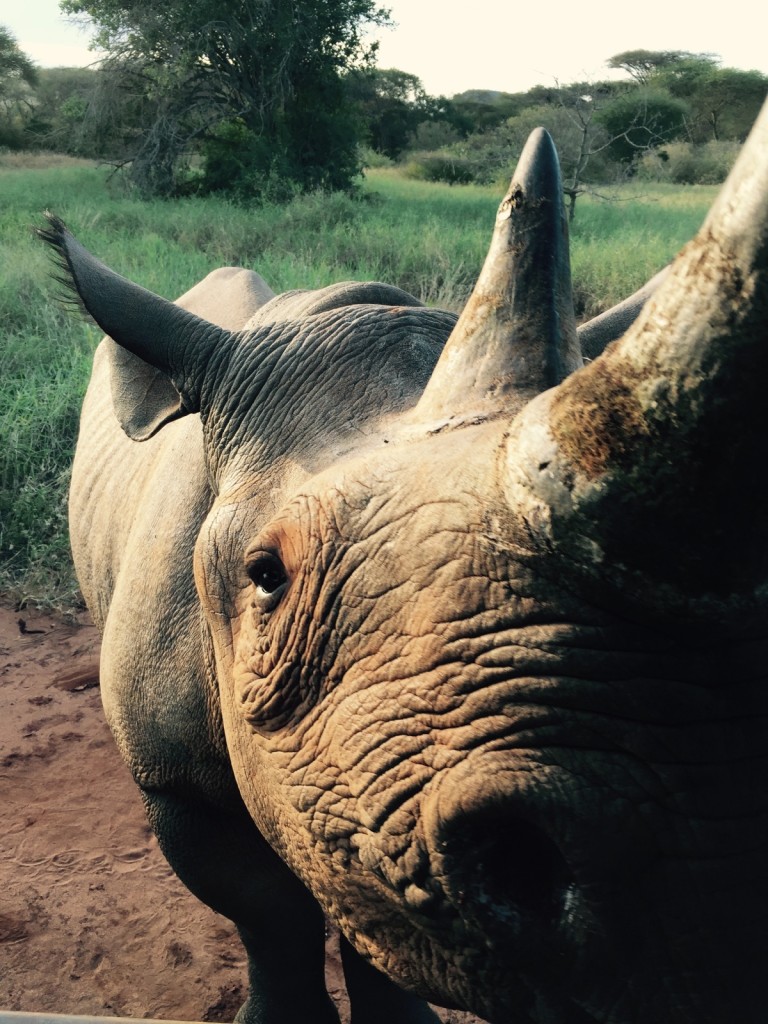 “This was the second time Zawadi, a female black rhino, met someone from my family. My brother William fed her three years ago in Kent just before she left under a translocation project to Tanzania where she now lives in a sanctuary. Thanks to the passion and stubbornness of Tony Fitzjohn OBE and his amazing rangers, she and many others are living it up in the bush and their numbers are growing. She goes nuts for carrots and I loved being able to send William this photo.”

“These baby rhinos are at an orphanage because their mothers were killed by poachers. I can’t say where this is for obvious reasons. But I spent an afternoon with Petronel Nieuwoubt who runs the orphanage. The youngest rhino was called Don. He was just two months old when he was found in Kruger National Park. Petronel has students and volunteers from all over the world come to look after these orphans. They pay for this experience and that money is used for milk, food, fencing and rangers for security.”

To find out more, visit Care for Wild.

“Trying to stop a three tonne rhino with a rope and a blindfold isn’t easy! Especially in this harsh terrain in Botswana. Mapp Ives and Kai Collins, with the help of Botswana Defence Force and the government, are doing everything they can to protect their newly reintroduced rhino population. This sometimes means having to sedate them to check on how they’re doing.”

Not everyone was thrilled about these photos. Royal photographer, James Whatling, said of these photos, “That’ll be a kick in the teeth for the photographers that have spent time and money travelling to SA with Harry.”

I understand why there would be frustration whenever a royal releases photos on social media like this because it causes the royal photographer’s photos to be used less and they therefore get paid less. But at the same time I think it is great that Harry was able to put his own captions to the photos and talk about his experience with his conservation work over the summer so that he is calling attention to the cause.

I know a few of us commented that Harry’s summer trip seemed like more for personal gain than any actual charitable effort, so his releasing these photos and videos and calling attention to the issue in my opinion is a good thing. The timing may be off, though. Harry’s already on a tour and there are already a ton of photos of him doing the wildlife conservation thing. If he had released these photos right after he returned from his summer work, I think that would have been a better time to release the photos and videos. For one, it would have called attention to the issue twice (once in September when he got back, and once now in December during his tour), and it would have not caused any unneeded issues with the royal photographers considering they are already really annoyed with the way William and Kate are handling things and the last thing Harry needs is to have the reporters and photographers annoyed at him the way they are annoyed at William and Kate.

So I agree the timing of the release of these photos may have been off, but overall I think this was a great thing. We (or at least I) want a more personal touch from the royals and Harry gave me that by talking about his personal experiences with his work. Harry is continuing to shine and the release of these photos with these captions just builds on his goodwill in my mind.