Kate Middleton, Duchess of Cambridge, was photographed out shopping on Friday, December 11, in Chelsea – where she reportedly spent an hour shopping in Peter Jones (a department store). 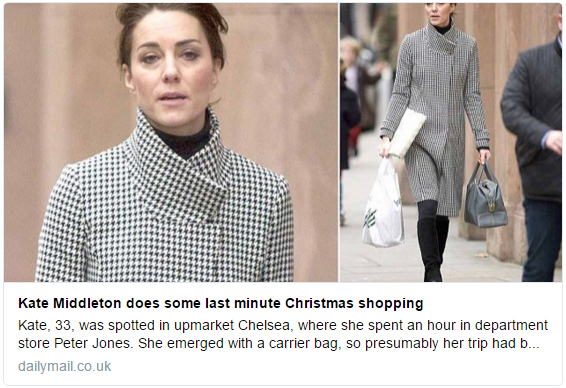 Kate wore the Reiss “Rubik Houndstooth Wrap Coat” ($620) she debuted on Thursday at the Action on Addiction center, and her Russell & Bromley HalfNHalf Stretch Rider boots (£395.00).

I still don’t like this coat – I’m just not a houndstooth person – but I kind of like her Tod’s D-Styling bag. It would make a great overnight bag.

Kate looks really tired in these photos, right? Did the three events in one week tucker her out or was it all the shopping? Because I swear I look like ten kinds of hell after an hour spent shopping. I hate shopping.

PS. I finally got to covering the Nobel Laureates dinner and Princess Madeleine’s new interview – go here for that article.