Royal Round Up! Lots of stuff this week with a bit of Kate Middleton, a bit of Sophie Countess of Wessex, more tiaras from Camilla Duchess of Cornwall and Queen Silvia, Queen Letizia kept busy, as did Queen Maxima and Queen Mathilde, and there’s a little bit of Crown Princess Victoria there at the end.

The Goring Hotel posted a photo to their Facebook page of Kate Middleton painting on their wall during her visit for their 105th anniversary. Apparently a white-gloved butler brought the paint brush to Kate on a silver platter carried on a red pillow. Because royalty can’t use normal paint brushes, you guys, they need special silver-platter paint brushes.

According to this Daily Mail article, Carole and Michael Middleton have moved into Anmer Hall and have taken over the responsibilities of the housekeeper and gardener husband and wife that quit recently (while they help look for replacement help) – Carole is running the household and Michael is overseeing the gardening. Interesting bits of info from the article: 1) Anmer Hall has 100 rooms? (this DM article says Anmer only has 10 bedrooms, so what are the other 90 rooms? Or did the first article mean to say 10 bedrooms and there was a typo?); 2) Kate “has endured another difficult pregnancy” (eyeroll) and “has been ‘tetchy’ and can only be truly placated by her mother” (lol, cling to those apron strings, girl); a “family friend” says the baby is due around April 25. One question: Who is running Party Pieces while Carole and Michael are tending to Anmer/Kate for the next few months? 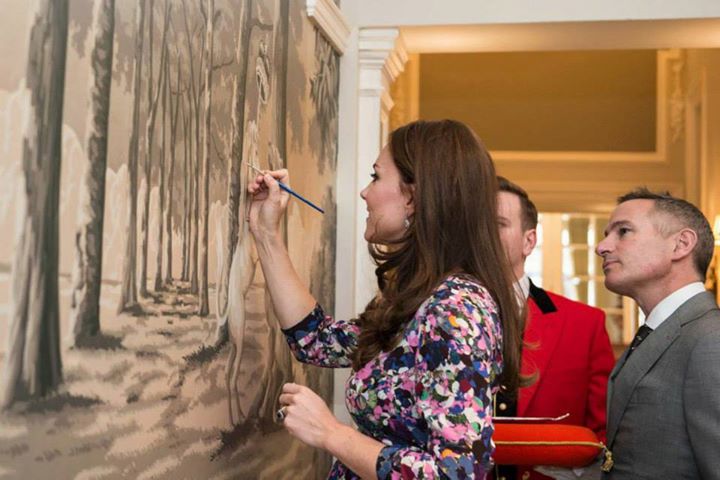 Speaking of Kate, you know how she’s going to visit the Downton Abbey set next Thursday? Well Sophie, Countess of Wessex visited the set last Wednesday with the First Lady of Mexico. This is not the first time Sophie has met the cast of DA, she’s done so a few times now.

Meanwhile, Mexico's First Lady was joined by the Countess of Wessex on location @DowntonAbbey #MexStateVisit pic.twitter.com/lOeIWseLan 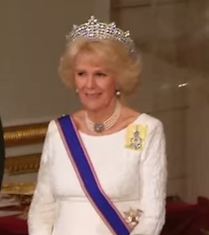 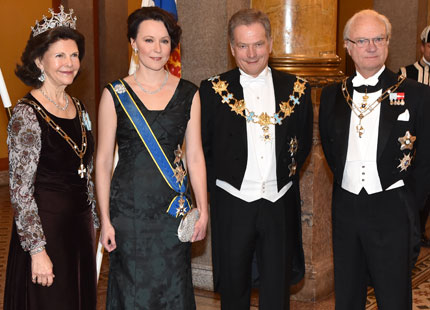 The Tiara Tour LIVES! Camilla, Duchess of Cornwall also attended the State Banquet at Buckingham Palace on Tuesday wearing the Greville Tiara/Boucheron Honeycomb Tiara. She’s also wearing her Royal Victorian Order and her Royal Family Order. On the second day of the Sweden/Finland state visit, Wednesday March 4, the Swedes held a Reply Dinner where Queen Silvia wore Queen Sophia’s Nine Prong Tiara. Also on Wednesday, The Lord Mayor of London held a banquet for the President of Mexico where his wife, Gilly Yarrow, and the Duchess of Gloucester both wore tiaras. The Duchess of Gloucester wore her Turquoise Tiara and Mrs. Yarrow wore her own tiara. 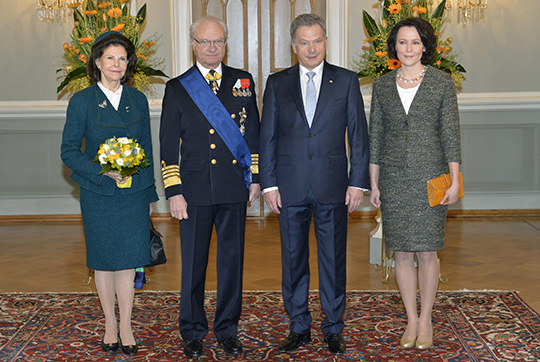 Speaking of Queen Silvia, while in Finland earlier this week she confirmed that Princess Madeleine is due to give birth to her second child in June however she insists that Maddie will be at Prince Carl Philip‘s wedding on June 13, so Maddie is probably not due until late in the month. Also, Silvia wore this beautiful green skirt suit and matching beret upon her arrival in Finland. Can I steal this outfit? I want one. 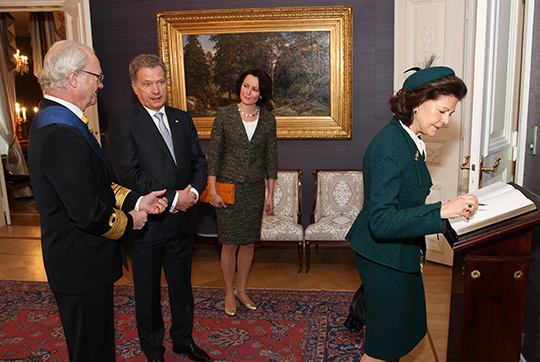 And speaking of Camilla, she (along with Prince Charles) was present for the ceremonial welcome of the President of Mexico earlier in the day on Tuesday, March 3, having visited Mexico as part of a tour last fall. Cam looked pretty in a nice purple coat and dress underneath, with a matching feather-covered hat. She wore two purple and orange flower brooches which I love.

Before Queen Letizia showed us the bling on Monday, she, alongside King Felipe, welcomed the Colombian President and his wife to Spain on Sunday, March 1. For the welcome ceremony, Letizia chose a dress by Oky^Coky that she previously wore in 2012. It may look like a skirt and a blouse, but it is actually all part of one dress. Leti wore a new Felipe Varela black crepe wool coat, nude Magrit pumps, and pearl and diamond earrings.

The Colombian President and his wife held a reply dinner on Tuesday, March 3. However, unlike the Swedish reply dinner, this one was much more relaxed (so no tiaras). Leti wore a black, double-breasted Felipe Varela tuxedo dress (second photo below). It’s really short, like well above the knee. I’m not a fan of the tuxedo-dress thing in general, and don’t really like this on Leti. Leti accessorized with her Lodi “Sara” black and burgundy pumps, a new black clutch with gold band (the Nina Ricci Arc Clutch $1,200), and new gold dangle earrings. She wore her hair in a fake bob, which I am also not a fan of. Not a fan of this look overall.

On Thursday, March 5, Letizia attended a ceremony at the Spanish Senate to mark World Rare Disease Day, as Honorary President of the Spanish Federation of Rare Diseases (FEDER). The theme of the ceremony was “Living with a rare disease: There is a gesture that changes everything”. Letizia gave a speech, saying in part (transcript here): “A country with strong science is a country that progresses, it moves, which allows its citizens to live better. Investment, public and private, in scientific research is always profitable, always convenient. Today more than ever, we repeat here that research is a prerequisite for progress in all areas.”

Leti rocked her BusinessQueen style repeating an outfit she wore last November at the 75th anniversary of the CSIC: a red blazer and floral print blouse by Mango; black trousers; and black Carolina Herrera heels. She switched up her earrings this time, opting for the Links of London Hope Egg earrings. 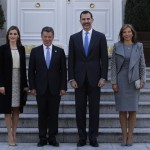 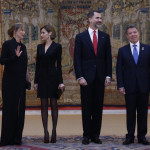 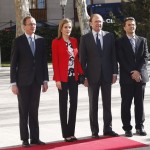 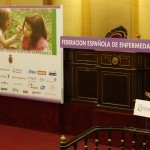 Here’s Leti showing her human side while greeting a child who suffers from a rare disease at World Rare Disease Day.

On Thursday, March 5, Queen Maxima opened the Maxima Channel (a new waterway) wearing a black and white patterned dress from Natan and beige hat and gloves. Then on Friday, March 6, Max attended a meeting of WOMEN Inc., and the 35th anniversary conference of Nibud (National Institute for Budget Information) where she gave a speech, saying in part (transcript here): “Research shows that we as consumers are much less rational than we think. At the same time, our financial environment is increasingly complex. So it’s good that Nibud holds up a mirror and gives us guidance. So we get a better handle on our own wallets.”

Queen Mathilde is still hobbling around on crutches, getting her work done, attending a conference on Ebola in Brussels on Tuesday, March 3. She even traveled to Washington, D.C. on Friday to attend a symposium to give a speech about ending violence against women in conflict, saying in part (transcript here): “Sexual violence in particular has been used throughout history as a weapon of war. The incidence of such attacks increases when conflicts or crises displace adolescent girls from their homes. To make matters worse, families and communities may consider that violated girls are a dishonor to their families.”

On Wednesday, March 4, Crown Princess Victoria and Prince Daniel visited Östersund where they visited the Östersund football club. There was an afternoon full of visits, which Daniel attended alone as Victoria had to drop out due to the flu.