So I never did cover Kate Middleton‘s third appearance of last week – her trip to Action on Addiction’s Autumn Gala. I attended a writer’s conference instead. So this post is a catch-up of the latest Kate stuff from the last week. 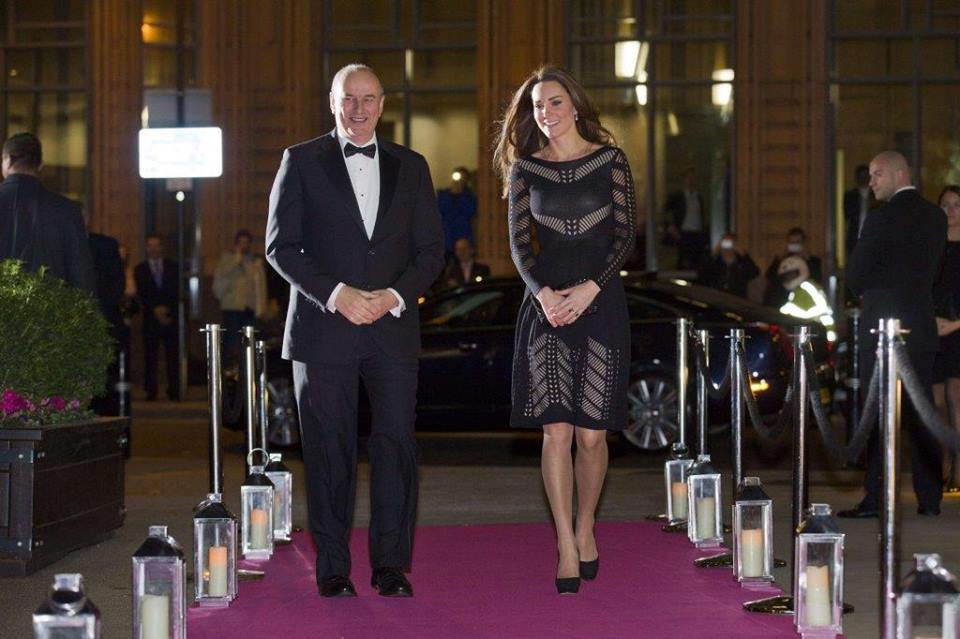 [Nick Barton and Kate, via Action on Addiction Facebook]

First, the Action on Addiction appearance. Kate attended Action on Addiction’s Autumn Gala dinner and reception last Thursday, October 23, at L’Anima Italian restaurant – do you think she ate anything? The dinner was the typical thing: to thank supporters of the charity who have helped fund the services, and invite and encourage further financial support. So they trotted out their Patron to chat to the financial backers, hoping that would lead to more financial backing. My take on Kate’s Patronages: this is why her charities keep her as Patron. It gives a nice name and face for when the charity calls on it’s real backers. The backers get to hob-knob with the royal, and Kate gets to put on a fancy dress, but she doesn’t actually have to do any work. They don’t want her to do work, or even really promote the thing publicly, it’s all about what the charity can sell to the rich people who will be donating most of the money they receive (because a few dollars from regular folks who follow Kate’s activities isn’t going to get them much).

“One in three people suffer from an addiction. It breaks up families, damages communities and destroys lives. In some way it touches us all. Action on Addition believes that it is important to take an integrated and dynamic approach to improving the understanding of addiction and people’s responses to it.”

In a foreword for the Gala’s program, Rebecca Deacon wrote: “During the time I have spent with clients and staff I have been privileged to see the phenomenal work which the charity undertakes to improve the lives of those affected by addiction. The stories of recovery are remarkable; and Action on Addiction’s role in helping people achieve this is truly inspiring. Your generous support will enable Action on Addiction’s vital work to continue, helping transform people’s lives.”

Nick Barton, Chief Executive of Action on Addiction, said: “The Duchess of Cambridge has shown unwavering support of the Charity… We are enormously grateful that Her Royal Highness has helped us to keep addiction very much in the spotlight by her involvement.” He also said, “She loves talking to the people we actually help and she’s so good with them and genuinely interested.” Uh, she rarely visits Action on Addiction anymore, but sure, fluff that statement up there Nick.

One of the charity’s supporters, Christopher Holder, said of Kate: “She’s a fabulous woman, she does so much for charity.” BAHAHAHA that’s funny.

Now on to that dress. Kate wore a Temperley London dress (£595), black with crocheted cut-out bits on the arms, skirt, and above and below the bust; and a deep scoop back. The dress thankfully has a nude slip underneath. Not going to lie, when I first saw the dress in a small photo taken from afar, I thought it was legit cut-outs, Kim Kardashian style. My god, I severely dislike this dress. I think it’s an ugly dress in general, but it looks even worse on poor Kate. She just doesn’t pull it off – the cut-outs cut her at odd places and it makes her shoulders look wider. And of course, it’s way too risque-looking for a Duchess at an elegant gala for one of her charities.

Kate accessorized with a new sequined black handbag, her weird diamond earrings that have never been identified, and her Jimmy Choo Cosmic heels.

Other Kate bits. The Daily Mail ran a story about a family that were accosted by Will and Kate’s protection officers while the family suffered a flat tire outside the Middleton home in Bucklebury. They then said they saw Kate, Carole Middleton, and Prince George at the Bucklebury Farm Park shop “where you can buy fresh meat and other food.” They took a snap of Kate in her car, driving away. No idea when this incident took place. But that leads me into the next bit…

Kate was spotted with George at that same park on June 27. That’s Kate’s protection officer in the photo with her.

Kate and George spotted at the Farm on a Dress down day while I was on a school trip #royalspotter #princeGeorge pic.twitter.com/52EMMqPkVj

You know how Kate loves, and I mean LOVES, her Annoushka Pearl Drop earrings? Well, Annoushka Ducas has had a chat to People Mag. Ducas says of Kate: “Kate looked radiant, elegant and eternally stylish; the pearls are very easy to wear and they look great on her… She pops in unannounced and very quietly looks at what she’s after and then goes away again. It’s all very low-key… She’s just so delightful and just very easy to talk to, very easygoing actually.” Ducas says Carole and Pippa Middleton are fans of her jewelry as well. But the most interesting thing is that Kate buys her own jewelry from Annoushka, like even the eternity band that everyone thought was a gift from Prince William? That’s actually really sad if that’s true. William is such an ass.

Apparently, William, Kate, and George are in Scotland at the moment. No idea what they’re doing. I guess Kate’s fully recovered from her “HG” if she’s cool with flying. Isn’t Will supposed to be doing some flying of his own, with his air ambulance training and whatnot? What ever happened to that?

The Duke and Duchess of Cambridge and Prince George are in Scotland at the moment.

I’ve just been told that William, Kate and the baby were on the plane with us from Heathrow-Aberdeen. I had nooo idea..

By the way, saw this in the checkout line at the store.  Got to love the juxtaposition of “Kate’s HG is over!” and “Ebola”.  Also, way to use a pic from before she was pregnant, People – WTF? 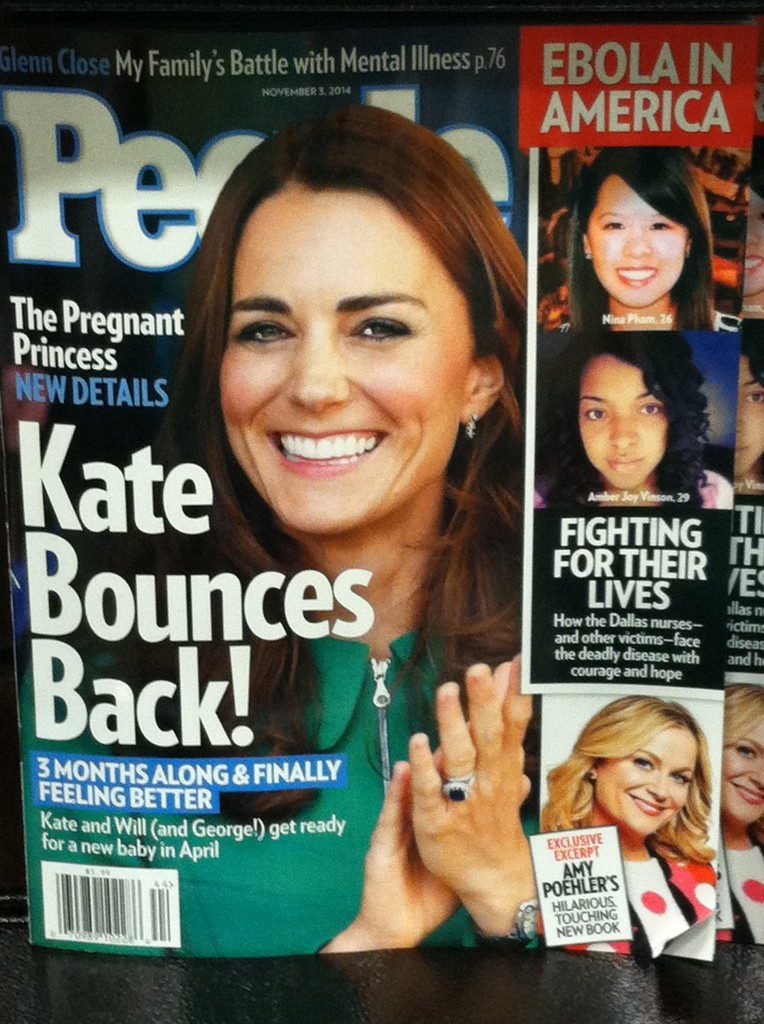