Fashion Kate Middleton Prince William
May 30, 2014May 30, 2014 by katemiddletonreview72 Comments on Kate comes out of hiding for a visit to Scotland with Will

Kate finally came out of hiding!!!  Kate Middleton made her first public appearance since returning from the Royal Tour of Australia and New Zealand (it’s been over a month since she made an appearance).  She and Prince William travelled to Scotland for a day of appearances.  Will and Kate’s correct titles are the Duke and Duchess of Cambridge (even though I rarely call them that), but they were also given a Scottish title by the Queen upon their marriage and are known as the Earl and Countess of Strathearn while in Scotland.  I’m going to refer to them by their Scottish titles for this post. 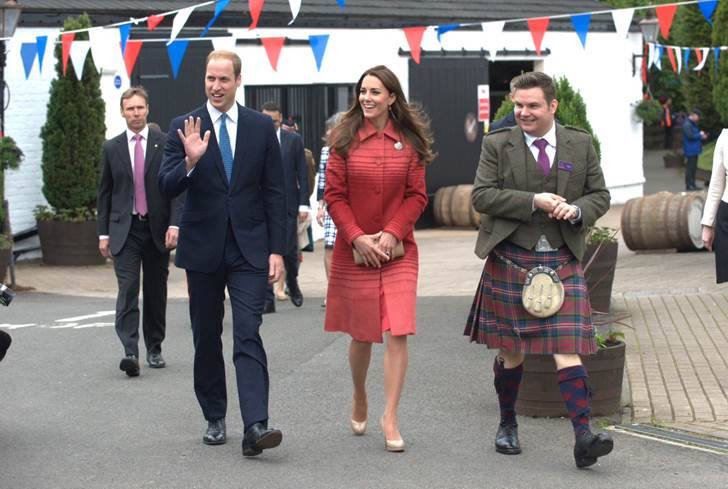 The Strathearns began the day with a visit to the Strathearn Community Campus in Crieff where they met some kids, and some bagpipers, and William took a tour of the Scottish Ambulance Service helicopter (Kate chatted to scouts instead—she’s a sometimes volunteer, remember).  William seemed truly interested in the helicopter; he was chatting to the pilots and actually seemed interested in what was happening.  Next, the Strathearns visited MacRosty Park, in Crieff, where they unveiled a plaque commemorating the restoration of the park.

The Strathearns then visited the Famous Grouse Distillery in Glenturret (and were greeted with more bagpipers).  The Grouse is the oldest distillery in Scotland, founded in 1775 (it’s older than the USA).  Will and Kate did a whisky tasting.  That’s whisky without the E, thank you very much.  I, as an American, have always spelled whiskey with an E, but the Scottish spelling of the word has no E in it.  William tried a few different whiskies, and Kate had one that was 57.8 percent proof.  I’m not sure how strong that is (I don’t know anything about percent proofs of alcohols), but it reportedly left her eyes watering.  And that was the “girlie one”, by the way.  I hate the taste of whisky personally, just not my drink.  Will and Kate toured the facility and learned about the process of making distilled beverages.  They then bottled their own whisky, which will be auctioned off.  They signed the label and everything.  They then officially opened the distillery’s new visitor center. 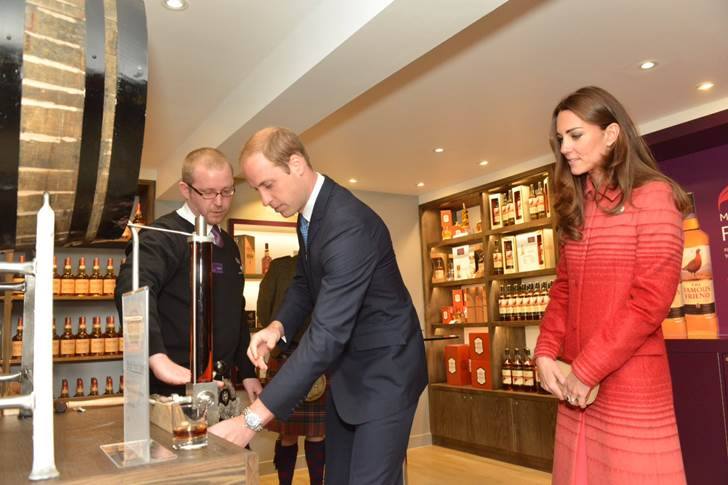 The last stop of the day was in Forteviot, for the Forteviot Fete (which is like a county fair?).  They visited the different booths, including one where someone had made a picture of the Strathearn family out of candies.  At one point, Kate took a shot of Strathearn heather rose gin and tonic and said, “I’d better not drink too much because of all the whisky I’ve had at Glenturret.”

Oh, by the way, I guess some trashy tabloids were reporting that Kate was pregnant with twin girls this past week or so; well since she tried the whisky and the gin, that rumor has been official dispelled.

The Earl and Countess flew up to Scotland the night before their day of appearances, and stayed at the Gleneagles Hotel.  They unveiled a plaque to commemorate the 90th anniversary of the hotel.  Does that count as an engagement?  I’ll have to check the Court Circular later. 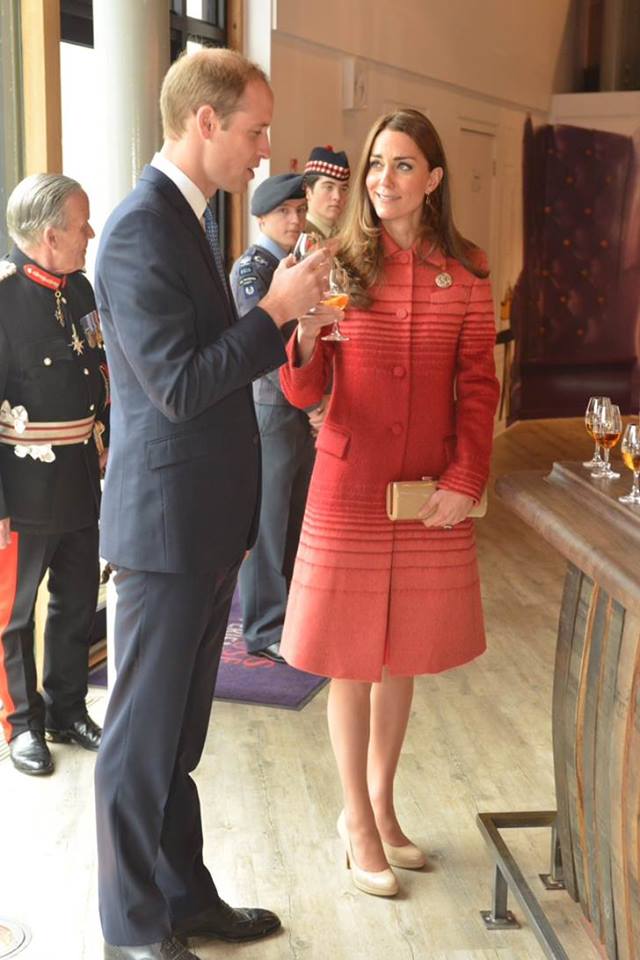 The Countess wore a Scottish designer for her trip to Scotland (huzzah, local designers!).  She wore a red/pink coat by Jonathan Saunders, the “Athena Wool Jacquard Coat” ($2,555).  It’s red in the middle, and has strips of red as it fades to a pinkish, coral color at the top and bottom.  It’s… not my favorite.  It comes in another color variation, a navy and olive green color, which I much prefer.  The Countess wore a coral-colored Goat dress underneath her coat.  Kate wore her LK Bennet nude pumps again, and carried her LK Bennet Avona clutch.  The Countess wore her Kiki McDonough citrine drop earrings and the Cartier watch she loves.

Let’s talk about the hair situation.  I would have loved if Kate had worn her hair back to show off the brooch more.  We were able to get a good look at it when she moved her hair, but for the most part the brooch was hidden.  Also, since the coat was buttoned all the way up to her neck, having her hair down made it feel rather constricting.  I was getting claustrophobic just from looking at the pictures.

Kate made some crazy faces for a fan who was taking her picture. Also, homegirl looked kind of rough, right? Maybe those bare bum photos get to her more than we think. Or William yelled at her or something.

I want to talk about Will’s fashion for a moment.  I usually don’t ever mention him, because he’s boring, but I want to say this.  Since the Earl and Countess were in Scotland, I think it would have been nice if William had worn a kilt—in the Strathearn tartan, of course.  Charles wears a kilt when he’s in Scotland; so does Philip.  I realize that none of us really want to see Will’s legs, and NO ONE wants to see his bare bum should an “accident” occur, but it would have been nice if he had gone with the tradition instead of wearing his regular, boring suit.

New appearances have been added to Kate’s calendar.  On June 10th, Kate will attend the launch of the America’s Cup at the National Maritime Museum in Greenwich.  On June 12th, Kate will attend a garden party for the 150th anniversary of the British Red Cross at Buckingham Palace. On June 18th, Kate will visit Bletchley Park–she’ll tour the site and meet former codebreakers.