In an update from my previous post, it seems like Will and Kate will not cause a huge ruckus over those photos and video of them walking hand in hand and of Kate playing with George.  Royal aides have asked the British media not to use the footage, but they aren’t going to make a huge deal over it.  It looks like someone from their PR department actually is thinking straight.  If they made a huge deal over this footage they would have turned everyone off and killed the goodwill they have been building, which would negate the whole purpose of the tour.  Who knows how much of a tantrum Will threw (or if he didn’t throw one because he was in on the release of footage that makes them look like a loving couple and her a hands-on mom), but if he did throw one, I’m glad someone on his team was able to throw some logic in there.  Making a huge deal over that footage would have been dumb.

Before I start with what Day 16 held for the Royal Tour, I want to say how annoyed I’m getting with the constant comparisons to Diana and Charles.  Can’t Will and Kate be their own people, their own couple, do their own thing without having to constantly be compared to the Waleses?  I feel like this is partially the blame of the media, and partially the blame of Will and Kate themselves.  The media loves to compare the Cambridges to the Waleses because they know it will draw clicks, and they simply must make Will and Kate the new Charles and Diana.  They all want to remake that magic—because it sells!  But I feel that Will and Kate court that comparison, too.  Kate especially courts that Diana comparison, and has for a long time, through her clothes and whatnot.  But this whole trip feels like the Cambridges want to recreate the Waleses 1983 tour so that they can recreate that magic and gain the public support that the Waleses received.  Don’t they realize that by comparing themselves to the Waleses, they look worse?  I wish the Cambridges would stop trying to be the new Waleses and be their own people. 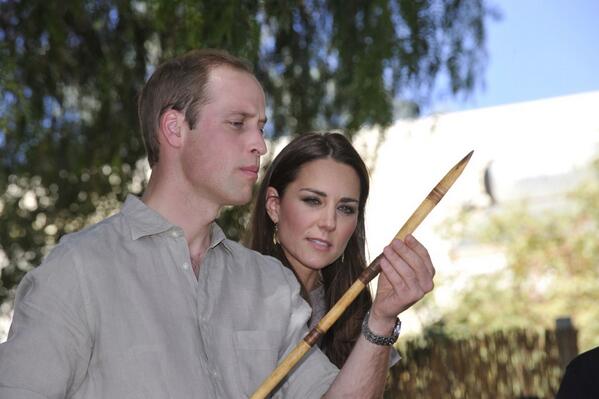 [Will receiving a spear as a gift]

Now that that is off my chest, let’s get to what went down on Day 16.  William and Kate flew to the Northern Territory where they visited Uluru (Ayers Rock). The monolith (every time I see/hear/use that word I think of 2001: A Space Odyssey) was named Ayers Rock by surveyor William Gosse in 1873, who named it after the Chief Secretary of South Australia at the time, Sir Henry Ayers. The aboriginal name for the monolith is Uluru, which has no direct English translation.  The Cambridges started their day by visiting the National Indigenous Training Academy—which provides training in the hospitality and tourism industries; there are 100 graduates every year.  They presented the trainees with their certificates and were presented with gifts in return.  William was given a spear; Kate was given a bracelet.  Um, those gifts are kind of sexist, right?  Why does the woman have to get jewelry?  I’d want the spear.  They were given other gifts, too, a bowl, clapping sticks—to which Kate said George loves anything that makes noise, which I’m sure is usual for a 9-month old—and a small kangaroo hair blanket.

The Cambridges then visited the Uluru-Kata Tjuta Cultural Center.  They were given more presents when they watched the Aborigine Welcome to the Country ceremony: a necklace for Kate and a paddle-shaped shield for Will—again, could those gifts be any more sexist?  Kate told one of the people there that George has developed another fat roll while on tour, and that she wished she could have brought him with her.  No mention of whether he was asleep or not when they left—lol.

They then visited the actual Uluru site and walked around (Kate didn’t change out of her heeled wedges for this walk, which I think is stupid) and had their pictures taken.  Of course, everyone is claiming this is such an “iconic” photo—and comparing it to the one of Charles and Diana.  The press has labeled a few photos of them from this tour “iconic”.  I can’t even tell you which ones they were now, because that’s how not-iconic they really are.  Nothing the Cambridges do screams iconic to me.  Maybe it’s because they don’t have the gravitas to pull that off, or maybe because it’s in the moment and nothing really screams “iconic” in the moment.  Give it a few years at least before you call something “iconic”.  Also, and I’ll get to this more later, if they were going for “iconic”, she should have worn a prettier dress.  Oh, by the way, there was a huge fly problem.  I can sympathize with them here, I ride horses and in the summer the flies are terrible.  Flies suck.

For the visit to the National Indigenous Training Academy, Kate wore another Roksanda Ilincic dress.  This one is a dark grey-ish color?  The Express is calling it oatmeal-colored; Daily Mail is calling it coffee-colored.  I’m not sure what color that is.  Actually, coffee-colored sounds about right.  She previously wore a dress by the same designer that is very similar in style to this one—twice—but it is not that same dress.  Kate wore her Catherine Zoraida double leaf earrings (£140/~$220 by today’s conversion rate) she previously wore to the state dinner in SE Asia.  I really like these earrings.  I actually have a pair of earrings featuring two leaves like that—and I love them, they are my favorite earrings—but mine are not Zoraida and didn’t cost 200 bucks.  Kate wore her Asprey Woodland charms again—these charms are expensive: acorn is $3,900; mushroom is $5,250; oak leaf is $2,600 (grand total of $11,750 for the three charms).  Kate wore her LK Bennett nude heels everyone but she hates, and carried her McQueen suede clutch.  Interestingly enough, she didn’t wear pantyhose, which is against protocol.  Someone said on twitter that it may be because it was hot so she didn’t wear them, but if it’s too hot to wear hose then why didn’t she put her hair up?  Weird.

For the visit to the Uluru Cultural Center Kate changed into her Hobbs Wessex dress she previously wore to an event right before the 2012 Olympics.  She also changed shoe into the Imperia slingback wedges (£85/~$140) she’s worn before—in fact, she wore these exact shoes with this dress to the previous event she wore this dress to, she didn’t change up her styling at all.  Ugh, another wedge, another repeat without changing the styling one bit.

I’ll be honest; I don’t mind the Ilincic dress.  It’s a nice dress, it looks professional.  At first I didn’t like the color because it’s so bland, but upon second viewing I don’t mind it.  She should have put her hair up, though.  Here’s a trick Kate, if there is detailing on the neckline, wear your hair up.  Kate really needed to wear her hair up, she was fiddling with it all the time; it kept getting in her face because it was windy and she had to constantly push it behind her ears.  I don’t like the Hobbs dress, though.  I didn’t like it when she wore it the first time and I don’t like it now.  I’m surprised she chose that dress for the “iconic” photo in front of Ayer’s Rock.  Like, really, you’re taking what is going to be labeled an iconic photo and you chose that cheap, ugly dress?

Here is an article from the London Evening Standard about the Cambridge’s tour and how their “renaissance” is natural and not all PR spin.  I was just going to put it in the links, but there is an interesting quote I want to discuss.  It says, “All the talk before they came here was of comparisons to the ‘Charles and Di’ tour of 1983… as soon as they arrived at Sydney Airport babe in arms and wowed the significant at Sydney Opera House the comparisons just stopped. [emphasis KMR]”  NO.  No, they really didn’t.  Will and Kate have been compared to Charles and Diana every leg of this trip, especially after the Ayer’s Rock visit.  This entire article is now moot because of this statement.  Well, maybe not entirely moot, the author does mention that Prince George being King in OZ is doubtful, which I agree with, but the whole “Will is doing things his way, that’s why the tour is so low key” thing is crap.  I believe this “down with the people (but not really)” trip has been orchestrated by the Palace, because obviously.  Will doesn’t give that many sh-ts, but the Palace knows what they’re doing by making a tour that is all about walkabouts and not tiaras—while still arranging enough to give off the Wales comparison.  They know what they’re trying to achieve from a PR standpoint.  I doubt Will had much to do with that.

4 thoughts on “Will and Kate visit Uluru (Ayers Rock)”