Mike Tindall revealed the name of his daughter with Zara Phillips on Twitter today. They have named her Mia Grace Tindall. 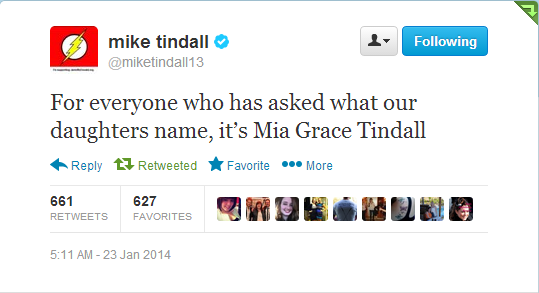 I love her name, it’s very beautiful. Poetic, almost. Hopefully we will get a picture soon.

I love that he did the name reveal on social media. A lot of celebrities are doing the baby reveal thing on social media these days, even posting first pictures to social media instead of selling them to a magazine. I think that’s great.

UPDATE: Here’s the Daily Mail’s article about the name. Zara’s spokeswoman said, “There is no family connection, no relation with the name, it’s just pure coincidence. They both just really liked the names, particularly Mia.” That’s cool. There doesn’t have to be a family connection to a name. It kind of bugs me that royals have to use (or usually use) familial names, because that is severely limiting. Good for them for choosing something different.