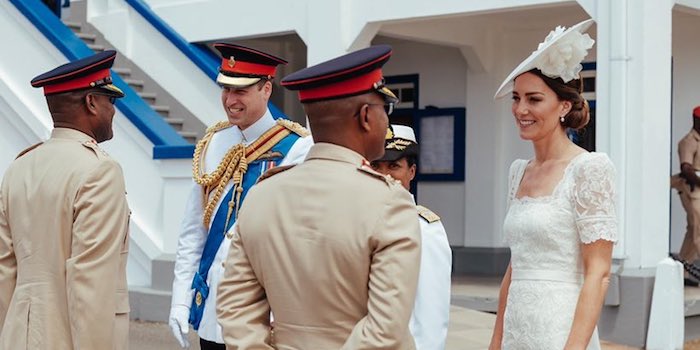 Yesterday, March 24, saw the Cambridge Caribbean Tour 2022 enter Day 6. Prince William and The Duchess of Cambridge held their final engagements in Jamaica before departing for the Bahamas.

The royal couple’s final engagement in Jamaica was attending the inaugural Commissioning Parade for service personnel from across the Caribbean who have recently completed the Caribbean Military Academy’s Officer Training Program.

William acted as Reviewing Officer for the parade, while Kate presented the first awards: the International Achievement Award and the Jamaica Military Commendation Medal for Excellence.

After the marches concluded, William gave a speech.

Governor General, Prime Minister, Chief of Defence Staff of the Jamaica Defence Force, Excellencies, Ladies and Gentlemen, good morning. I am honoured to be here representing Her Majesty The Queen at the Caribbean Military Academy’s first Commissioning Parade for the Initial Officer Training Programme. Congratulations to everyone on parade today.

I have stood to attention myself on many parades as you do now, proud of my accomplishments, yet also hoping that the Reviewing Officer keeps the speech short. This is all the more important today as we bask in the glorious Jamaican sunshine!

You all stand before me as seventy-seven officer cadets: from Jamaica, Antigua and Barbuda, Barbados, Guyana, St Kitts and Nevis, Suriname and Uganda. However, you are here today as one unit. You have formed friendships which will last a lifetime, and built a network of camaraderie and experience to call upon in the future.

I know very well from my own time at the Royal Military Academy Sandhurst what a formative experience this year will have been. Today you mark the successful completion of your training programme in the classrooms, on the parade squares and in the exercise areas.

But remember, this is just the beginning. Because now the hard work really starts, as you join your units and assume command. You are graduating today as officers into an uncertain world. In your service ahead you will have to contend with climatic, geological, criminal and wider state and non-state threats to our collective safety, security and prosperity. Being asked to lead men and women through uncertainty and danger is daunting.

You never know how strong you are, until being strong is your only choice. From here the onus is on you to grow into the leaders you have been taught about in textbooks, watched on your screens and witnessed in your instructors. Good leadership is hard to define, but it’s easy to recognise in others.

As Catherine and I visit Jamaica in celebration of The Queen’s Platinum Jubilee, I thought I might quote my grandmother on the subject. In an address to the United Nations General Assembly in 2010, she said: ‘I know of no single formula for success, but over the years I have observed that some attributes of leadership are universal, and are often about finding ways of encouraging people to combine their efforts, their talents, their insights, their enthusiasm and their inspiration, to work together.’

I think that’s a very good model to follow. Let me also pay tribute today to the instructors and staff here at the Caribbean Military Academy for running this Initial Officer Training Programme. Putting on this international course for the first time was never going to be easy. And then you had to deliver it in the middle of a global pandemic.

You should all be incredibly proud of your achievement, and of the young officers turned out so smartly in front of us today. I know how pleased the Royal Military Academy Sandhurst is to have helped you establish this course, and it’s great to see the Commandant here today. Your collective collaboration and success is a testament to the continuing excellent defence relationship between Jamaica and the United Kingdom.

And finally, I know how special it is to have your families join this celebration of your achievement. So I would like to thank all the guests for travelling here today. Were it not for your support and guidance, particularly given the additional challenges imposed by the pandemic, these cadets would not be here. I know you are beaming with pride. Congratulations again everyone.

William and Kate then attended a reception with the newly commissioned officers and staff at the Jamaica Officers’ Club. To travel from the parade to the reception, the Cambridges used the same Ceremonial Land Rover the Queen and Prince Philip used during their visit to Jamaica in 1962.

The Cambridges then headed to the Norman Manley International Airport for their farewells to Jamaica – they were joined by dignitaries to which they said goodbye before boarding the plane.

This departure brought about Kate’s first repeated outfit: this green Emilia Wickstead dress which she previously wore to the 2021 Women’s Singles Final at Wimbledon.

This dress is cute and I’m glad Kate didn’t buy a whole new dress for a plane boarding photo op. But the real star of the show is the brooch. Oh, and Kate brought back her square Kiki McDonough Citrine earrings which she first wore in 2013.

Now about that brooch. Kate sported The Queen’s Jamaican Hummingbird Brooch which was a gift to HM when she visited Jamaica in 2002. The Royal Collection Trust describes this brooch: “Brooch in the form of the Jamaican National Doctor Bird (a species of hummingbird only found in Jamaica) noted for its distinctive tail streamers. The brooch can be converted into a hat pin.”

I checked my copy of The Queen’s Diamonds, which was published in 2012, but it does not have a listing for this brooch. I’m not sure The Queen has ever worn it publicly. I think it’s wonderful that Kate brought it out to play.

Upon arrival in the Bahamas, William and Kate were met by dignitaries and Kate received flowers from a little girl, 8-year-old Aniah Moss, who looked lovely in her pink dress and gloves.

“[Kate] said I had a nice dress and I was beautiful and thank you for the flowers,” Aniah tells PEOPLE. Asked what she thought of the royals, she adds, “I think they’re very tall!”

Aniah’s mother, Kendenique Campbell-Moss, says her daughter was asked to perform the flower girl duty without a chaperone: “She was all on her own like a big girl!”

Noting that Aniah is the same age as William and Kate’s eldest son Prince George, Campbell-Moss says, “He’d like it here for the sand and sea.” The proud mother adds that the dress was bought for Easter last year. “When we were called last night to be the flower girl, I thought I better pull it out and make sure she’s ready for the day!”

William then inspected the Guard of Honor.

From the airport, William and Kate traveled to the Prime Minister’s office in Nassau where the couple met with Prime Minister of The Bahamas, Philip Davis, and his wife, Ann-Marie Davis.

Here is a video from with William and Kate’s arrival as well as part of their conversations with the PM that were public. Interestingly, there’s some behind-the-scenes with the media as well which I find fascinating.

During the private part of the meeting, William and Kate were gifted a portrait hand painted by Bahamian artist Jamaal Rolle. I haven’t seen any photos, but the office of the PM’s twitter posted a video of the artist and the portrait. It’s an absolutely gorgeous portrait.

— Office of The Prime Minister The Bahamas (@opmthebahamas) March 24, 2022

For her arrival in the Bahamas, Kate changed into another Emilia Wickstead dress. I believe this one is new. I think the color is pretty, but I’m not a huge fan of the collar/neckline thing going on.

I do love the ponytail, though. I like that she’s being doing that more this trip. According to Heaven on Twitter, Kate’s earrings are Sézane Taylor Earrings in Turquoise.