After the Duke and Duchess of Cambridge arrived at the Manchester Central Convention Complex, they headed to the BBC Children’s department where they saw how the BBC runs interactive workshops called “Stepping Out” sessions. These sessions are a focus group where young people are able to give children’s editorial staff and content producers their view of how they respond to new programs.

As part of the Stepping Out session, William and Kate sat in on a Q&A with a young person named Josh, who featured in a Newsround special telling his story of his mental health challenges. Then William and Kate took part in a feedback session with young children from The Friars Primary School where the children discussed mental health and how it affects them or how they try to cope with it, which helps inform TV programming.

As a side note: William mentioned to the children that Prince George was in his school’s nativity play, saying: “I went to my boy’s nativity play. It was funny. He was a sheep.” 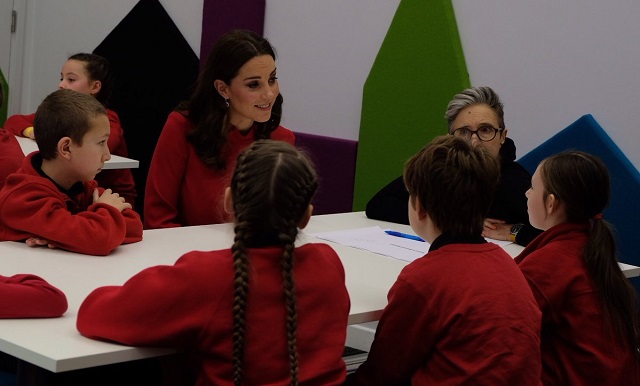 The Cambridges then moved to the actual conference, but before that they met children who were there to greet them. William then attended a short private meeting related to the Royal Foundation Cyber Bullying Taskforce while Kate attended a “Sesame Workshop” hosted by the team behind the children’s TV program Sesame Street.

William then gave the keynote speech at the conference.

“Good afternoon and thank you for having myself and Catherine here. First of all, a word if I might about this great city of Manchester – to which most of you are visitors. You may have seen, if you have had a chance to go outside, the symbol of the bee everywhere in the city – the bee is Manchester’s symbol, a reminder of this city’s industriousness and creativity. It is also a reminder of Manchester’s community spirit, the sense of pulling together. Manchester has had a tough year, and I personally stand in awe of the way that the people of Manchester have united in bravery and support of one another. This community is a great example to all of us, wherever we are from. I hope you all have a chance to witness some of this remarkable place for yourselves while you are here for the Summit.

“Parents like Catherine and me are raising the first generation of digitally-immersed children – and this gives us many reasons to be optimistic about the impact of technology on childhood. Barriers to information about the world are falling. The child of today can learn about far flung corners of the world with previously unimaginable ease. Social media holds the promise for children who can feel isolated to build and maintain friendships. Digital media is seeing today’s young people develop a passion and capacity for civic involvement that is without parallel in human history. Programme makers have access to real-time research that helps them shape engaging, educational content for children in ways that would have been unheard of in years gone by. We should celebrate and embrace these changes. What we cannot do, however, is pretend that the impact of digital technology is all positive or, indeed, even understood. I am afraid to say that, as a parent, I believe we have grounds for concern.

“I entered adulthood at the turn of the millennium. The generation of parents that Catherine and I are a part of had understood the world of mobile phones, the internet, email, and the like for some time. We had every reason to feel confident. The changes we have incorporated into our own lives as adults have often felt incremental, not revolutionary. The vast array of digital television content that many households enjoy today did not spring up overnight. The birth of the smartphone was heralded as a landmark moment. In truth, though, we incorporated constant texting, checking of email on our devices, and 24/7 availability into our lives over the course of many years. The centrality of the internet for education, shopping, and the organisation of domestic life has been the work of two decades. And it is the gradual nature of this change – the slow warming of the water in the pot if you like – that I believe has led us to a moment of reckoning with the very nature of childhood in our society.

“The latest Ofcom research into the media consumption habits of British children shows us just how dramatically the landscape has changed without most parents pausing to reflect on what actually is happening. Parents who were born before the invention of the World Wide Web now have children aged 5 to 15 who spend two hours a day online. Ten years after the introduction of the iPhone, over 80 percent of 12 to 15 year olds have a smartphone. Most of my contemporaries graduated university before any of us had Facebook accounts – and now 74 percent of 12 to 15 year olds are on social media. And a generation of parents for whom watching television was something that happened as a family around a single set have given a fifth of our 3 to 4 year olds their own tablets.

“Now, I am no Luddite – I believe strongly in the positive power of technology; but I am afraid that I find this situation alarming. My alarm does not come from childhood immersion in technology per se. My alarm comes from the fact that so many parents feel they are having to make up the rules as they go along. We have put the most powerful information technology in human history into the hands of our children – yet we do not yet understand its impact on adults, let alone the very young. And let me tell you parents are feeling the pressure. We need guidance and support to help us through some serious challenges.

“Everywhere you go, mothers and fathers are asking each other the same questions. Did you see that so-and-so’s friend had an iPhone at the playground? How can I keep my daughter off social media if all of her friends are on it?;How do I know what my children are doing online in their bedrooms? How do I monitor what they’re messaging to other children? How do I find out what apps my children have downloaded? How do we protect family time and teach our kids about actual connection, when all their communication is through their phone? How do we convince our children to go outside and be active and fit, when all they want to do is play online?

“These conversations are happening right now in our towns and cities and right across the world. We have all let technology slowly creep into our lives. And now we are waking up to the enormity of the challenge technology and modern digital media will mean for children.

“The people in this room may be the best placed in the planet to help today’s parents, teachers, and caregivers to grapple with these questions. As I said earlier, you are only here because you are passionate about childhood. Your combined experience and insight can be a powerful force for positive guidance. Parents are eager for your advice about how best to combine technology and innovation with the timeless goal of safe and innocent early years that are filled with love and genuine connection.

“Like all of you, I believe firmly in the power of bringing people together, people with knowledge and passion, to tackle big issues confronting our society. That is what I did through the Royal Foundation when we established the Taskforce for the Prevention of Cyberbullying. Bullying through phones and social media is an issue that caught my attention after reading about children who had taken their own lives when the pressure got too much. As a HEMS and Air Ambulance pilot, I was called to the scenes of suicides and I witnessed the devastation and despair it brought about. And I felt a responsibility to do something about it.

“The Royal Foundation brought together the leading players in digital and social media, the ISPs, academic researchers, and children’s charities. And importantly, we brought children and parents themselves to the table, so their voices could be heard directly. What we heard is that cyberbullying is one of those issues that had been allowed to slowly take root. An age-old problem had been gradually transformed and accelerated by technology that allowed bullies to follow their targets even after they had left the classroom or the playing field. The technology we put into the hands of our children had for too many families shattered the sanctity and protection of the home.

“After a year and half’s work, the taskforce announced a plan of action last month. The sector agreed to four main areas of work: the implementation of standard guidelines for the reporting and handling of bullying; a national advertising campaign to establish a code of conduct for the online behaviour of children; the piloting of an emotional support platform on social media; and finally the members have pledged to continue to work together to offer consistent advice to parents and more material for children to help them thrive online. And you will hear more about this next.

“I am proud of what was achieved, but, as I said at the time of the plan’s launch, I had hoped we could go further. I am very pleased that the BBC has taken up the challenge of supporting one area that I believe merits further discussion: the creation of a single, universal tool for children to report bullying when they see it or experience it – regardless of which platform it happens on.

“What we have shown through the taskforce – and what we show when we gather on days like today – is that solutions to our challenges are possible when we work together. We can be optimistic about the way digital media will help our children when we can be frank about our concerns. Families can embrace technology with confidence when they can access the best the best support and advice. And we can be hopeful about the future of our society when we all know that protecting the essence of childhood remains our collective and urgent priority.”

I do like that William has taken to discussing the positives that technology and the Internet can bring to people’s lives, and not just the negatives – he didn’t used to do that, so that’s progress for him. I also liked his ‘slow warming of the water in the pot’ analogy and that he talked about how technology’s infiltration into our lives was gradual. I just wish he would speak more about how technology and the Internet are blank slates and it’s humanity that has created any negatives that exist there. It’s not an angle most people take when discussing cyberbullying, but it’s important to note since the only true way to defeat cyberbullying is to change humanity as a whole. Creating anti-bullying tools is great, but that’s a bandaid. It’s fighting the symptom, not the disease.

Upon first glance, I thought Kate’s coat and dress were repeats from a few years ago, but it turns out they are both new. Kate wore a new LK Bennett Delli Check Coat (£495.00) with a fine houndstooth pattern, and a new Goat Elodie Tunic Dress in Berry (£450.00). She repeated her Tod’s block heel pumps in black suede (£335), her Mulberry Bayswater Clutch in black suede, and her Mappin and Webb Empress earrings.

Here is a video of the Cambridges arriving at the Summit and speaking to children.