Last night, September 23, Prince Harry opened the third Invictus Games in Toronto after meeting with foreign dignitaries and visiting various organizations. This post is just about Harry, I have covered Meghan Markle’s appearance at the opening ceremony on the other blog.

At the ceremony, Harry gave a speech, saying:

“The true scale of this example was brought home to me when I left Afghanistan after my first deployment there in 2008. As I was waiting to board the plane, the coffin of a Danish soldier was loaded on by his friends. Once on the flight, I was confronted with three British soldiers, all in induced comas, with missing limbs, and wrapped in plastic. The way I viewed service and sacrifice changed forever. And the direction of my life changed with it. I knew that it was my responsibility to use the great platform that I have to help the world understand and be inspired by the spirit of those who wear the uniform. In a world where so many have reasons to feel cynical and apathetic, I wanted to find a way for veterans to be a beacon of light, and show us all that we have a role to play; that we all win when we respect our friends, neighbours, and communities. That’s why we created Invictus. Not only to help veterans recover from their physical and mental wounds; but also to inspire people to follow their example of resilience, optimism, and service in their own lives.

“We made a great start in London in 2014. We took it to the next level in Orlando last year. And over the next week – in this year as we celebrate Canada’s 150th anniversary – Toronto is going to put on a games that draws the attention of the world. More competitors, more sports, more nations, more friends, more families and more people watching at home than ever before. With the people in this arena tonight – and those watching across Canada and around the world – we have the biggest crowd Invictus has ever enjoyed.

“Before I close I want to speak directly to the competitors. For the next week, we entrust you with the Invictus spirit. You have all come such a long way. Some of you have cheated death and come back stronger than before. Some of you have overcome emotional challenges that until very recent years would have seen you written off and ignored. And now you are here. On the world stage. Flags on your chests. Representing your countries again. Supporting your teammates. And looking up into the stands, and into the eyes of your friends and families. You are all winners. Please don’t forget to love every second of it. Don’t forget about our friends who didn’t come home from the battlefield. Don’t forget those at home who still need our support. And don’t forget that you are proving to the world that anything is possible. You are Invictus. Let’s get started.”

Harry was seated in a special section next to US First Lady Melania Trump and Canadian Governor General David Johnston and his wife Sharon. In the row ahead of them were Ukrainian President Petro Poroshenko and his wife Maryna, and Canadian Prime Minister Justin Trudeau and his wife Sophie.

Earlier in the day, Harry had a short meeting with Melania Trump…

… As well as a meeting with Justin Trudeau. 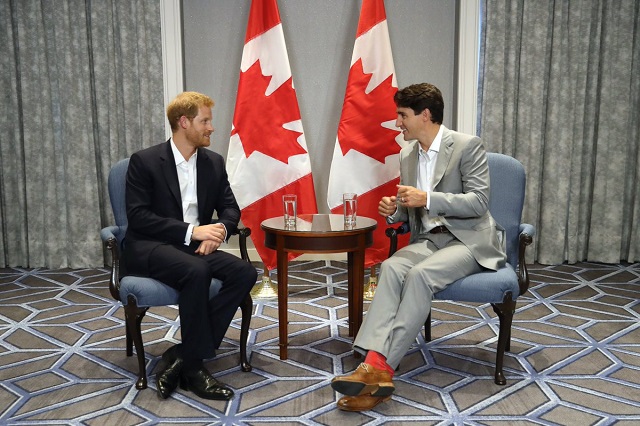 Harry also did some promotional stuff ahead of the opening ceremony, including getting driven around a track by Daimy Gommers in a mini Land Rover. This wins best photo of the week.

Also on Saturday, ahead of the opening ceremony, Harry visited The Centre for Addiction and Mental Health, which is Canada’s largest mental health and addiction teaching hospital, as well as one of the world’s leading research centers in its field. Princess Diana visited this center back in 1991.

Harry spent nearly two hours at the center meeting with many of CAMH’s leading researchers. From the Daily Mail:

“After being told one of the center’s main approaches is prevention, the prince told doctors: ‘It seems we suffer from a culture where a pill will fix everything. There has to be a better way than just giving out anti-depressants. There were 65million given out in one year in the UK alone. That’s why I look to you guys in this room. Everyone is uniquely wired is what I keep saying. There is no one silver bullet, no one cure for everyone.’ …

“The young royal was also praised for his work in raising the issue of mental health and helping to reduce the stigma. He modestly said: ‘It’s a massive team effort and everyone is doing their bit just trying to normalize it so people can seek help without judgement. If everyone can do that, it’s better for everyone.'”

I do think that all three younger royals are stifled in the “mental health” arena by the fact that they cannot discuss politics. Like, they can’t sit there and say that mental illness and treatment should get better, lower cost health care coverage because that’s getting too political for them, and that’s a hindrance to their mental health campaign.

Here are some more photos from the Invictus Opening Ceremony.