Here’s my post for Belgium Day 2 on July 31. Prince William and Kate Middleton, along with King Philippe and Queen Mathilde, were joined by Prince Charles for the second day of commemorations marking the centenary of the first day of Passchendaele, the third Battle of Ypres.

The day began with William and Kate visiting Bedford House at Tyne Cot Cemetery where they met Commonwealth War Graves Commission interns who help visitors understand the stories of servicemen in the cemetery, before viewing some of the graves.

Charles then joined William and Kate.

The Prince of Wales and the Cambridges were then joined by the King and Queen of the Belgians and Sir Timothy Laurence for a walk through the cemetery before attending the commemoration ceremony at the Memorial. 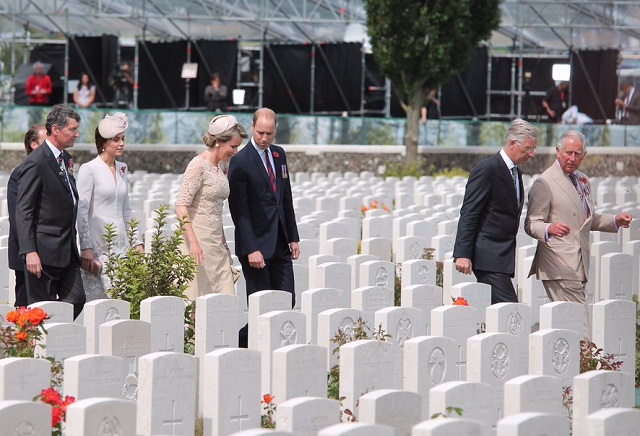 Prince Charles gave a speech at the ceremony.

“One hundred years ago today the Third Battle of Ypres began. At ten to four in the morning, less than five miles from here, thousands of men drawn from across Britain, France and the Commonwealth attacked German lines. The battle we know today as Passchendaele would last for over one hundred days. We remember it not only for the rain that fell, the mud that weighed down the living and swallowed the dead, but also for the courage and bravery of the men who fought here. The advance was slow and every inch was hard fought. The land we stand upon was taken two months into the battle by the 3rd Australian Division. It would change hands twice again before the end of the war.

“In 1922 my great grandfather, King George V, came here as part of a pilgrimage to honour all those who died in the First World War. Whilst visiting Tyne Cot he stood before the pillbox that this Cross of Sacrifice has been built upon, a former German stronghold that had dominated the ridge. Once taken by the Allies, the pillbox became a forward aid post to treat the wounded. Those who could not be saved were buried by their brothers in arms in make-shift graves; these became the headstones that are before us today. After the end of the war almost twelve thousand graves of British and Commonwealth soldiers were brought here from surrounding battlefields. Today a further thirty four thousand men, who could not be identified or whose bodies were never found have their names inscribed on the memorial.

“Thinking of these men, my great grandfather remarked: ‘I have many times asked myself whether there can be more potent advocates of peace upon earth through the years to come, than this massed multitude of silent witnesses to the desolation of war.’

“In 1920 the war reporter, Philip Gibbs – who had himself witnessed Third Ypres – wrote that ‘nothing that has been written is more than the pale image of the abomination of those battlefields, and that no pen or brush has yet achieved the picture of that Armageddon in which so many of our men perished.’

“Drawn from many nations we come together in their resting place, cared for with such dedication by the Commonwealth War Graves Commission, to commemorate their sacrifice and to promise that we will never forget.”

Kate laid a wreath at the memorial while William read: “A Soldier of The Great War Known Unto God.”

Tyne Cot Commonwealth War Graves Cemetery and Memorial to the Missing, which was designed by Sir Herbert Baker and completed in 1922, is the largest Commonwealth war cemetery in the world in terms of burials. There are 11,961 Commonwealth servicemen of the First World War buried or commemorated in Tyne Cot Cemetery. 8,373 of the burials are unidentified. There are also 4 German burials, 3 being unidentified.

The Memorial forms the north-eastern boundary of Tyne Cot Cemetery and commemorates nearly 35,000 servicemen from the United Kingdom and New Zealand who died in the Ypres Salient after 16 August 1917 and whose graves are not known. The memorial stands close to the farthest point in Belgium reached by Commonwealth forces in the First World War until the final advance to victory.

The ceremony ended with a flypast of four Belgium Defence F16’s flying the Missing Man Formation.

Charles then marked Welsh and Irish contribution during Third Battle of Ypres at the Artillery Wood Cemetery. He gave a reading and laid a wreath.

The first day of the Third Battle of Ypres saw the Victoria Cross awarded 14 times – a record number for a single day in WWI.

The first day of the Third Battle of Ypres saw the Victoria Cross awarded 14 times,a record number for a single day in WW1 #Passchendaele100 pic.twitter.com/VSRQM4JyDS

Switching gears into fashion… Kate mixed old with new and re-purposed a hat to my dismay.

Kate chose a new coatdress from Catherine Walker, the “Melrose”. The coat looks white and grey to me, but the product description calls it “dusty pink” with “taupe” lace applique. Sure. Kate’s coat is slightly altered from the original design.

She paired the dress with a pink Prada clutch she’s had since 2011, a new pair of Gianvito Rossi Praline 3.5 inch pumps (because she needs the same pair of heels in two different heel heights for some reason), and her Cartier watch.

Kate wore Diana’s Collingwood Pearl and Diamond Earrings again (she debuted them at the Spanish State Visit), and another loan from the Queen: a Three Pearl Diamond Leaf Brooch. The provenance is unknown, but HM wore it during a State Visit to South Korea in 1999.

Now on to that hat. Kate wore a Jane Taylor hat which has been re-trimmed. Back in August 2014, Kate was in Belgium to mark the centenary of the beginning of WWI, and she wore a very pretty Jane Taylor hat with pink ruffles on it. For the 2017 event, Kate removed the ruffle and added some light pink tentacle things. While I don’t think the new version is ugly, I think it is a discount version of the original. The original design was very pretty, this new design is blah.

Queen Mathilde also wore lace, opting for a beige dress with lace on the bodice, and matching beige accessories.

Charles and Philippe also wore sunglasses during the ceremony.