Kate Middleton was out at an engagement yesterday, June 29, at the Victoria and Albert Museum to open the new V&A Exhibition Road Quarter.

Upon arrival at the V&A, Kate was greeted by museum officials, and a little girl handed her some flowers, which were quickly snatched away (see video below).

Kate then toured the Sackler Courtyard – the first porcelain-tiled public courtyard in the UK, paved with 11,000 hand-made tiles in 15 different patterns.

Video; Kate receives a posy at the V&A pic.twitter.com/nt4wn92Mwy

Kate continued her tour in the Sainsbury Gallery – a new 1,100 square metre column-free underground space which will be one of the largest temporary exhibition spaces in the UK.

About the Gallery’s architect:

“The facility, which was largely funded by private donors, was completed in four years by British architect Amanda Levete and her practice, AL-A. Ms Levete, who won the contract for the project in 2011, said: ‘It’s an absolute honour to have the Duchess of Cambridge opening this building, and I feel very proud of the work my team have done.’ The architect, who has recently been nominated for a CBE, said Kate was ‘quite stunned’ when she first emerged into the porcelain courtyard because the ‘sun came out and the courtyard was glistening’.”

“I think she was wowed by the architecture, and she was really interested in the engineering – how we dug down and yet kept the walls upright and didn’t break a single glassware or ceramics.” 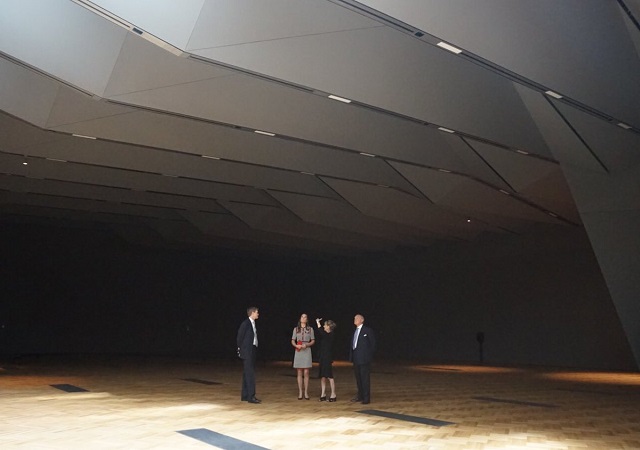 Kate then met donors and guests involved in the project’s delivery in Blavatnik Hall, the new entrance to the V&A.

More from the Telegraph:

“Sir Tim Sainsbury, 85, a trustee of the Victoria & Albert Museum, said: ‘I think, like everybody else, the Duchess was immensely impressed by the scale and column-free big heights of the Sainsbury exhibition space. I think she genuinely enjoyed herself – she even said she’s looking forward to many more future visits.'” 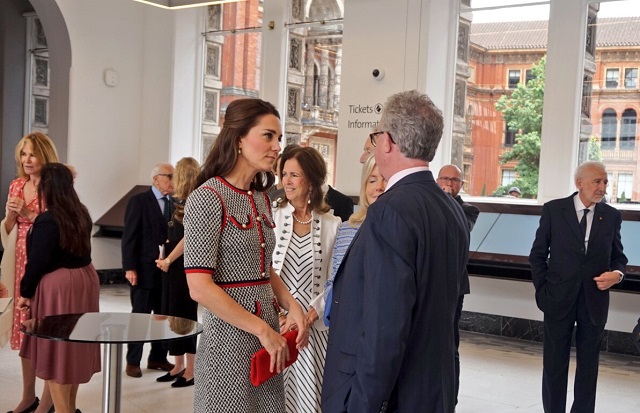 Kate unveiled a plaque in Sackler Courtyard before leaving the museum.

Kate paired the new dress with shoes she hasn’t worn since 2012: her LK Bennett “Art” navy heels. Kate carried a new clutch today (instead of one of her several other red clutches which look almost exactly the same as this new one): a custom bright red version of the Emmy London Natasha clutch (the non-custom version retails for $475). Kate wore her Annoushka Pearl Drops also.

I dislike this dress. I think boob flaps look ugly on any garment, and I also dislike the hip flaps, too. And I dislike high necklines. This dress has a very 60’s mod look which I think looks rather twee.

I will say, though, that I love that Kate didn’t match her bag to her shoes. She so often goes matchy-matchy with things, but I love that she mixed it up a bit here and did a red bag and navy pump – pulling both accent colors into her accessories. It’s something different for Kate and I really like that.

Here is a video of Kate’s visit.

Additionally, KP announced that Kate, as Patron, will open the new Hintze Hall at the Natural History Museum on July 13.

Kate got a bag of goodies as a gift from the museum.

Rebecca Deacon was with Kate yesterday.

142 thoughts on “Kate in Gucci to open V&A exhibition”