Kate Middleton was in charge of shushing Prince George and Princess Charlotte as they acted as pageboy and bridesmaid at Pippa Middleton‘s wedding today, May 20. 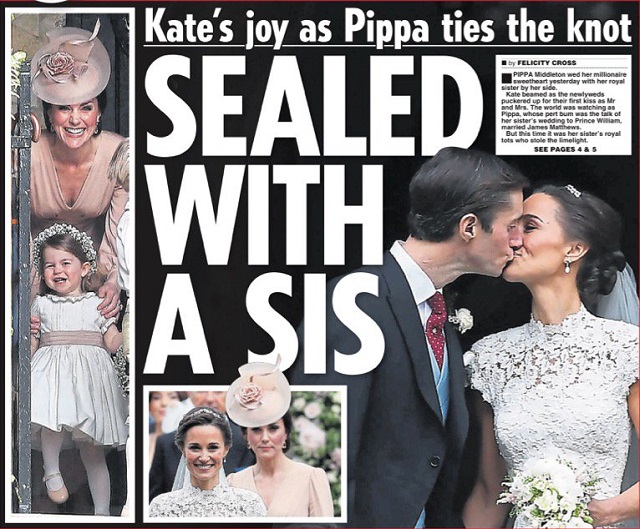 Pippa married hedge fund manager James Matthews at St Mark’s Church in Englefield. Pippa arrived at the church in a car with her father, Michael Middleton, who walked her down the aisle. The service was attended by friends and family, and conducted by Rev. Nick Wynne-Jones.

Pippa’s wedding dress was created by British fashion designer Giles Deacon. From a press release with details of Pippa’s wedding (which I think was released by KP), Deacon said of the collaboration:

“I was thrilled to work with Pippa on her wedding dress. The dress is constructed with a cap sleeve, high neckline and features a corseted bodice with draping to the front and a heart-shaped detail at the back. The bespoke silk cotton lace was hand appliquéd to create an illusion of the dress having ‘no seams’. The lace bodice is embroidered with pearl detailing over an organza and tulle underskirt, which has layer upon layer to enable a floor-sweeping movement. It’s a privilege to show the craftsmanship that my team produces in London and a real testament to Pippa’s support of British fashion.”

You can see the open back detail in this photo of Kate adjusting Pippa’s veil.

Speaking of Pippa’s veil, it was a bespoke creation from milliner Stephen Jones made from fine tulle with a dégradé of embroidered pearls.

Pippa’s wedding jewelry was from Robinson Pelham. Her earrings were the same bespoke earrings she wore to Kate’s wedding back in 2011, but the Maidenhair Fern Tiara with matching hairpiece was a new handmade creation.

The shoes were a Manolo Blahnik pump, in an ivory satin with bespoke pearl detailing. And the bridal bouquet by Lavender Green was a collection of Peony, Sweet Pea, Astilbe, Freesia, Waxflower, Green Bell and Alchemilla Mollis.

Pippa and James gave a kiss for the waiting press and public that had come out to see the wedding.

I’ll be honest, Pippa’s wedding dress is not my cup of tea. I hate high necklines, as has been well established on here. I don’t like lace, and think this gown’s lace seems so heavy and constricting – it looks so stiff.

As far as the tiara goes, it’s not my favorite design, but overall I think Pippa looks very pretty (I love her earrings). I have no problem at all with Pippa wanting to wear a tiara and having one made for her to wear. If she wanted one, and she and her family can afford it, why not?

Kate had an unofficial role as matron of honor and child-wrangler. She helped Pippa with her dress and veil (as seen above), and Kate was in charge of keeping the kids in line.

Kate chose her go-to designer for big events, Alexander McQueen. The long-sleeved, blush pink dress features a deep v-neck, puffy sleeves, pleating in the front, and flaps on the hips. This dress is pretty ugly. Kate tends to look nice in light pink, but I think this pink is too dull for her. It doesn’t look good. 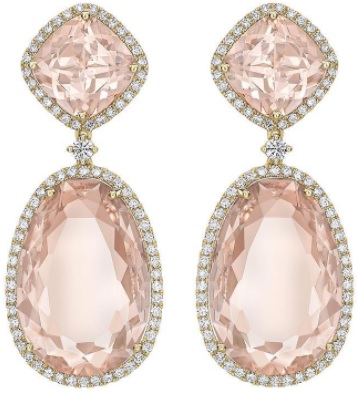 Here are some photos of Kate The Kid Wrangler:

Prince William and Prince Harry arrived together. Meghan didn’t come to the church ceremony, apparently, which is the biggest bummer.

Carole Middleton arrived with her son James Middleton. Carole also wore pink, because the Middletons love color-coordinating for events. She wore a Catherine Walker coat which I honestly thought was one of Kate’s for a moment – which, more than anything, tells you how old Kate dresses.

James’ girlfriend, Donna Air, got to go. She wore a cream Emilia Wickstead dress and Jane Taylor hat, which is a bit too bridal for a wedding if you ask me.

Nanny Maria wore her Norland Nanny uniform. I have no problem with her wearing her Norland uniform to events. If she wants to wear it, that’s her business.

More photos of George and Charlotte:

Here is video of Pippa arriving at the church.

And here is video of Pippa and James leaving the church.