After spending part of their morning with Place2Be, Prince William and Kate Middleton spent part of their evening on February 6 at the Health Writers Conference where it was William’s turn to give a speech.

The Duke and Duchess of Cambridge attended the Guild of Health Writers‘ The Anxiety Epidemic event at Chandos House in London. The event was supported by Heads Together and several people from each of the charity partners were there to network.

The event saw four expert speakers discussing why anxiety and related mental health problems are now reaching epidemic proportions, how they can best be treated, and measures aimed at reducing the scale of the problem. Speakers included: Jacqui Marson – chartered counselling psychologist, bestselling author and former war reporter; Paul Farmer CBE – CEO Mind and independent chair of the Mental Health Task Force 2015; Dr. James Davies – reader in anthropology and mental health at the University of Roehampton, co-founder of the Council for Evidence-based Psychiatry; and Claire Kelly – Co-Director of the Mindfulness in Schools Project.

Heads Together marathon runner Louise and her boyfriend Ryan also spoke about the conversations they had to help overcome anxiety.

Then it was William’s turn to speak. For space, I’ve cut some of the thank yous at the beginning and end.

“You may be wondering why Catherine, Harry and I got involved in this topic in the first place. Mental health is traditionally not a mainstream subject, after all.

“For me personally, it was a gradual awakening over many years through work I’ve been privileged to witness with vulnerable young people – the homeless, the unemployed, those who are unable to fulfil their potential. It was their openness about their mental health, their anxiety issues, their honesty about not coping, that made me realise that poor mental health was a major issue in our society. Much greater than anyone cared to admit. And it was an issue that needed addressing if we were to attempt to solve many other problems that trouble us.

“I know what I have just said may sound obvious to you – of course poor mental health underpins many other problems. But to me – as it still is for many, many people – mental health was the great taboo. If you were anxious, it’s because you were weak. If you couldn’t cope with whatever life threw at you, it’s because you were failing. Successful, strong people don’t suffer like that, do they. But of course – we all do. It’s just that few of us speak about it.

“But I got interested in mental health for another reason. One that was related to my work as an Air Ambulance pilot. It was suicide, a subject that is so often hidden. The suicide rate among young men in this country is an appalling stain on our society. Suicide is the biggest killer of men under 40 in this country. Not cancer, not knife crime, not road deaths – suicide. If one of these other issues took so many young lives, there would be a national outcry. But there has only ever been silence. And this has to stop. This silence is killing good people.

“For Catherine and Harry, their journeys to Heads Together were different: Harry predominately through his work with veterans, and Catherine through her work with children and young families. But their conclusions were the same – that mental health needed to be brought out of the dark and de-stigmatised.

“So, what have Catherine, Harry and I decided to do about it. These topics are complex, and we are certainly not experts. So we started by using our Royal Foundation to convene eight charities from the sector to seek their advice. We asked them to tell us what was the most useful thing we could do to help. And what they told us surprised us – although it seems obvious now given what I’ve just told you already. These charities told us that the most important thing that needed to happen was to normalise mental health – to get people comfortable with the subject and to talk about it. Simple as that.

“At the moment, on average it takes a sufferer ten years to admit to a problem. This means that what often starts as a fairly minor issue becomes something serious and medical after time. What these charities told us was that silence can kill; but talking can lead to help and support.

“I was already experiencing the benefits of this open, positive approach to mental health in my work as a Search and Rescue pilot previously and now as an Air Ambulance pilot. In both these environments, every member of the crew is actively encouraged to admit when we are feeling overwhelmed or unable to cope – whether because of work or something in our home life. My employer, I’m proud to say, knows about the value of normalizing mental health, and treating it with the same respect that we confer on physical health. This should be the norm.

“So, for the next few months, we are running a campaign to get people from all walks of life to record videos recounting what it feels like to open up to someone else. We want that ‘someone else’ to be celebrated – simply for taking the time to ask ‘are you okay?’ and to properly listen to the answer.

“We hope that these videos will inspire people across this country, whatever their background, to talk up, and to tell another person if they feel like they can’t cope. That it’s perfectly okay to do that – it’s a positive step, and a sign of strength not weakness. To achieve this we will be working with a number of media organisations that share our commitment to ending this stigma, and we greatly, greatly appreciate the support.

“All of this activity culminates this April at the 2017 Virgin Money London Marathon, where Heads Together is the Charity of the Year. This gives us an incredible platform to start millions of conversations on mental health and make this year’s London Marathon the first ever ‘mental health marathon’. We want to get the country talking about mental health.

“So, what comes after all this activity? For some people, a conversation with a friend, family member or colleague may not be enough. It is clear that people struggle to access expert advice. With our Heads Together Charity Partners, we have been exploring the gaps in the support they would like to offer. We have been looking to see what we can do to give people more confidence to help each other and to make it easier to find the right advice. We are working through the detail of this programme and we will set out the direction of this work later in the year.”

Whoever wrote this speech needs to start writing Kate’s speeches. Because this was a great speech, and everything I’ve been wanting from Kate’s speeches on mental health.

Taking a turn into the frivolous… After going Full Repeat earlier in the day, Kate opted for a new jacket and skirt from Oscar De La Renta. Kate wore the “Three Quarter Sleeve Pleated Jacket” (originally retailed for $2,190) and the “Full Pleated Skirt” (originally retailed for $1,290). Both the jacket and skirt come from the AW15 collection and feature a wool blend and are in the ‘Ultraviolet’ colorway. Given the color, it looks like Kate may have worn this to the Christmas lunch at BP back in December. 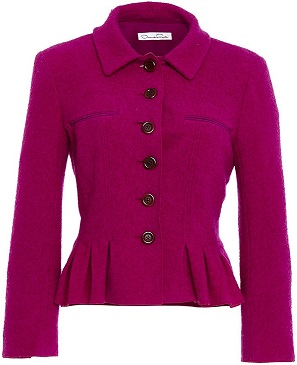 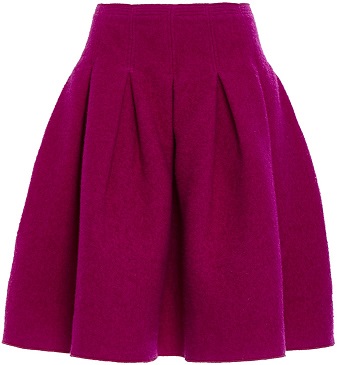 It’s fine. It’s not amazing, but the color does look nice on her.