It’s that time of year again: Royal Engagement Numbers! Because of two foreign tours, Kate Middleton really outdid herself this year in terms of engagement numbers. 2016 was Kate’s most productive (?) year yet in terms of numbers.

I’m going to start with Tim O’Donovan’s numbers for the British Royal Family. The following list includes: Name of royal: total number for 2016 (percent* of individual out of the 3725 total done by the family) (change from total in 2015)

* Percent is rounded to the tenth.

For the rest of this review, I am going to use my own engagement number totals. You can see my full breakdown of all of Kate’s appearances here. I counted Kate working 133 engagements over 63 days: 73 engagements in the UK over 45 days; 59 engagements out of the UK over 18 days.

The length of each engagement varies but on average it’s probably about 1 hour each. If we say each engagement is 1 hour each, we can calculate Kate’s 2016 engagement numbers into roughly 16 and a half normal, 8-hour working days. If we do the same thing for William, it converts to 23 and a half normal, 8-hour working days. I won’t say that that’s probably more time than he actually spent at his “normal” job with the EAAA.

As for Kate’s visits to her patronages, she had 30 interactions with her patronages this year (22.5% of her engagements), interacting with 12 out of 13 of them. 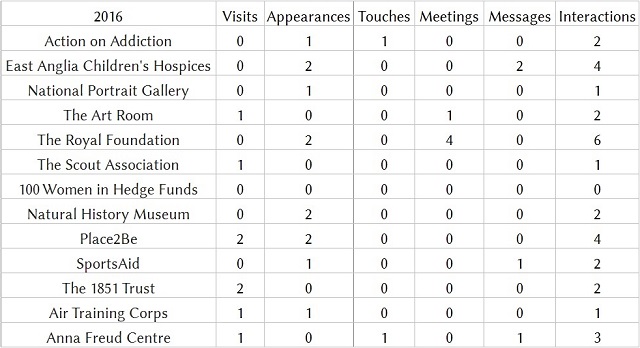 Heads Together was the new joint mental health campaign launched by William, Kate, and Harry this year. This is not one of Kate’s official patronages but I kept track of how many times she did something for Heads Together in 2016: 7 times.