The Sun: Prince Harry & Meghan Markle are ‘extremely serious about each other’

I wasn’t planning on covering Prince Harry‘s rumored romance with US actress Meghan Markle again until there was more evidence of the relationship, but then I read this Sun article and laughed, so I thought I’d share.

Prince Harry & Meghan Markle are “very serious and the real deal”. Harry pursued her, despite her Boyf. https://t.co/ZcFOb568VL

We learned on Sunday that Harry has supposedly struck up a romance with Suits actress and humanitarian Meghan Markle, and since then some of the press and public have flipped out. I’m not going to delve too much in Meghan, because I’m too busy delving into Kate and the Swedes in order to write some fun articles for you guys, but from what I’ve gleaned from other people’s delving apparently Meghan was in Mexico when Harry was in Toronto (which is when the Express claimed they met), they wore similar-looking bracelets in some photos, they follow each other in Instagram, and Meghan’s Wikipedia page’s edit history is going crazy (with people updating it with this rumor and others taking it down).

With that being said, let’s get to this funny Sun article. The article is a bit long, so I cut some stuff out for space – you can read the full thing here.

“PRINCE HARRY inundated a sexy actress with texts until she agreed to go out with him. The 32-year-old royal pursued Suits star Meghan Markle, 35, after meeting her at a charity do in May. And The Sun can reveal they saw each other twice last month after a string dates over the summer. Friends say the couple are ‘extremely serious about each other and massively loved-up’.

“One said: ‘They are the real deal. He definitely pursued her and besieged her with texts until she agreed to a date. They went out with a group of friends to Soho House in London in early July, followed by two dates by themselves where Harry swept her off her feet. By August it was a serious. He is very full-on but she was going through quite a tough time with her previous boyfriend and she was very flattered. She couldn’t contain her excitement, but once she got back from London she became very secretive. It was then that it changed from them just ‘seeing each other’ to boyfriend and girlfriend. He’s head over heels and she feels the same.’

“[…] Harry likes an independent girl and the LA-born actress is undoubtedly her own person who is clearly not afraid of the limelight. Meghan, who is nicknamed ‘Flower’ by her African-American mum, Doria, grew up on TV sets, with her dad Tom Markle working as a lighting director on hit Eighties and Nineties US sitcom Married… With Children. […]

“Our source added: ‘Harry loves her humanitarian work in Africa and the fact she’s an independent, sassy girl, while she’s part of a power clique in Toronto that includes the prime minister and major TV stars so she’s not intimidated by celebrity.’

“With Meghan’s glamorous dress sense, charity work and volunteering echoing his beloved mum, Princess Diana, it appears to be so far, so perfect for the royal, who has always said his heart lies in Africa. But success in Meghan’s personal life has until now eluded her, and there was one small problem when she met Harry — she was seeing someone else. Having split from her husband of three years, film producer Trevor Engelson, in 2013, she was dating Canada’s version of Gordon Ramsay, celebrity chef Cory Vitiello.

“A pal close to the couple said: ‘Their relationship was on the rocks but it was complicated as they were still living together and had to sort out custody of the dogs. Cory is quite the player and they were on the outs in April. Meghan was feeling pretty down and vulnerable. She’d been very hurt by Cory. Then suddenly there’s a Prince Charming who’s pursuing her like mad and she couldn’t contain her excitement.’

“Contrary to reports, the pair did not meet when Harry was in Toronto in May to promote next year’s Invictus Games. Meghan was in Mexico at the time, while Harry spent only a day in the city before heading to Florida’s Palm Beach to play in a polo match for his Africa charity Sentebale. Friends say they first became aware that the relationship was serious in August. Despite Harry being in Africa from July to the start of September, Meghan was in London in August and at the Soho Farmhouse members’ club in Oxfordshire with Made In Chelsea’s Millie Mackintosh in September.

“The pal added: ‘She hasn’t met William, Kate or Charles yet. But this has become a pretty serious relationship so that’s the logical next step. Harry is pretty gutted this has got out. He wanted to keep it under wraps as long as possible and very few people knew. It was conducted in the utmost secrecy, as Harry wanted to give it as much time as possible without the glare of publicity. She really could be the one.’

“She has ordered her relatives to stay quiet about her romance with the fifth-in-line to the throne. But family friend Eri Specht, who was in a relationship with Meghan’s half-brother Tom for 15 years, said: ‘She’s very smart, very well educated and very poised. If anyone is well suited for a prince, Meghan is. She is a great catch — she’s really kind, careful and goes out of her way to help other people. She would be a very moderating, careful influence on Harry, whatever they stepped into. You don’t want him to end up with Miley Cyrus! Meghan is much more classy and sensible. She worked really hard to get where she is. She’s very accomplished and professional.’

“Eri added Meghan was ‘heartbroken’ by the breakdown of her marriage to Engelson. But she said the actress was ready to start a family, and Harry has made no secret of the fact he wants kids and to settle down. Now, finally, he may have found his perfect woman.”

First of all, I want to say that I am not a fan of Miley Cyrus, but even so there is absolutely no need to throw her under the bus, completely randomly as she has no bearing on this story whatsoever, to make Meghan look good.

I cut out the part about Meghan’s background, but again they refer to her as “a household name”. Dear, reporters: Meghan Markle is NOT a household name. STAHP!!

I want to draw your attention to part that made me legit laugh out loud when I read it, then question my reading of it, then go “Huh?”: At the beginning of the article, it claims Harry met Meghan “at a charity do in May”, and then later on, it says: “Contrary to reports, the pair did not meet when Harry was in Toronto in May.” So they met at a charity function in May but it wasn’t in Toronto on May 2? I laughed originally because I thought the article was contradicting itself, but now I’m just confused.

“Meghan, who is nicknamed ‘Flower’ by her African-American mum, Doria.” I’m not familiar with Meghan’s past interviews, did she say this publicly? If not, someone seriously leaked the nickname her mother calls her? Why?

Now on to the hilarious quotes from “pals”. Firstly, “She hasn’t met William, Kate or Charles yet.” is a direct contradiction to what Camilla Tominey wrote in her article on Sunday, that William and Kate had met Meghan and given their approval. So which is it? Who is right and who is pulling crap out of their butt?

“Harry is pretty gutted this has got out.” THEN WHY ARE YOU TALKING? If this pal exists… does it seriously not see the irony in talking to reporters about how Harry is bummed the romance leaked? Or is the irony the point and it’s supposed to be funny?

Oh man, though, these quotes from friends… They’re just so funny. Maybe it’s because I’m not one for the over-the-top romance (I laughed so hard at The Notebook I thought it was a comedy), but these over-the-top romantic quotes are just so funny to me: “He’s head over heels and she feels the same”; “a Prince Charming who’s pursuing her like mad”; “She really could be the one”; “If anyone is well suited for a prince, Meghan is”. I can’t stop laughing.

PS. According to the Evening Standard, Harry was scheduled to fly to Toronto to visit Meghan on Sunday, but didn’t show:

“Sources say Harry, 32, was booked on Flight BA0093 at 11.30am from Heathrow to Toronto on Sunday when news of his romance broke in the press. A source said: ‘The flight was booked last week but he was a no-show.’ […] The source added: ‘The crew for the British Airways flight knew the Prince was booked to travel with them. It appears he pulled out at the last minute and decided not to travel.'”

Also, both Harry’s and Meghan’s reps have not commented: “Kensington Palace said it did not comment on ‘private matters’. […] Her representatives also remained silent today.”

Oh, and also: “Today, bookmakers suspended all bets on the prince getting married. Previously, they had offered odds of 12-1 that he would announce his engagement this year, and 5-1 that he would wed in 2017.”

The article ends with this gem: “Earlier this year, Harry said: ‘Even if I talk to a girl, that person is then suddenly my wife.'”

PPS. There is this other Sun article which is basically a rundown of what we know so far with quotes from other sources I’ve already linked, but it does include this tidbit at the end:

“When The Sun contacted representatives of the actress Kruger Cowne, we were told the romance was still ‘unofficial’. A spokeswoman added: ‘However, should this be confirmed by the Palace, all of us at Kruger Cowne are delighted for them and wish them well.'”

The same article says Harry split from Cressida Bonas “earlier this year”, which we know is not true.

I looked up Kruger Cowne and while there is an article saying Meghan has signed with them (though it’s not dated at all), her profile page (which the news page directs you to) returns a 404.

So there you go.

Meghan at Wimbledon on June 28 and July 4.

Harry in that Heads Together video – because I think this photo is fun. 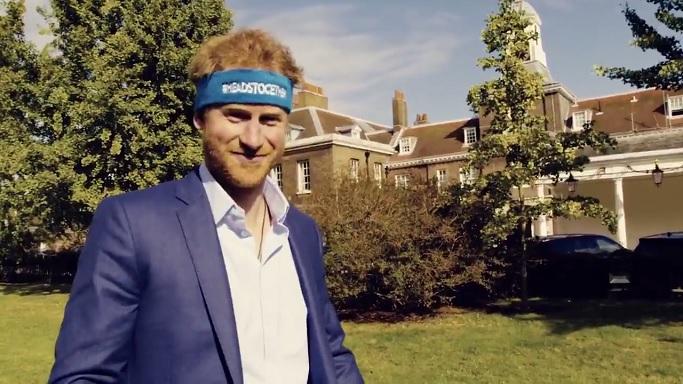 110 thoughts on “The Sun: Prince Harry & Meghan Markle are ‘extremely serious about each other’”