Prince Harry attended a reception on Day 2 of his Royal Tour of the Caribbean yesterday, November 21, at which the Prime Minister of Antigua, Gaston Browne, invited Harry to spend his honeymoon with Meghan Markle on the island. 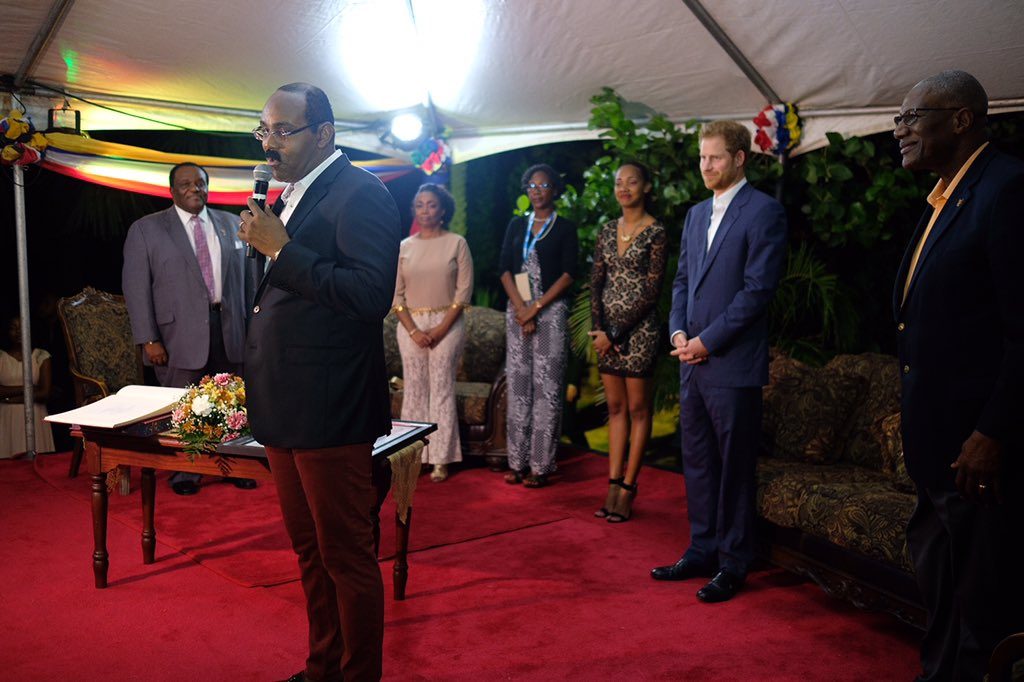 Prime Minister Gaston Browne made the comments in front of 300 guests at the reception at Barnacle Point, saying:

“I understand that there may be a new addition to the Royal Family very soon? I am told that there maybe a princess and I just want to say that should you make the decision to honeymoon – then Antigua and Barbuda want to welcome you. We have been voted consistently as the best honeymoon destination in the Caribbean – and one of the best in the world – so there will be nowhere in the world as special to spend your honeymoon, when that day arrives.”

Then after the speech, Browne told the press:

“I believe Meghan is a very beautiful looking girl, they make a very good looking couple. Yes, I heard about her and I hear they are speculating that they will now get married. I hope that Harry and Meghan come here for some quiet time very soon. We have some beautiful resorts, we have residences here worth between 15million USD to 60million USD in value. I am sure that several of the homeowners would be more than willing to accommodate them.”

According to the Express, Harry grimaced and looked at his feet, and fiddled with his shirt to avoid eye contact as the PM spoke.

Wow. I mean, what Browne said was highly inappropriate especially in front of so many people, but damn that’s hilarious. I feel so mean laughing at that comment, especially since Harry was reportedly so embarrassed by it, but it’s just so funny because Browne is fully-throttle using Harry to promote his island as a honeymoon spot and doesn’t care if he embarrasses Harry in the process. It’s amazing. As of time of posting Browne has not apologized, and I hope he doesn’t. Own your self-promotion, buddy.

Harry then attended a Charities Showcase event at Government House where he presented Ineta Wallace with an OBE for outstanding contribution to National Development.

Harry then attended a children’s charity party outside where he met people from several charities including the Nolan Hue and the Halo Foundation, Scouts and the Girl Guides, and the Women of Self-Esteem Foundation.

On Day 1 of Harry’s tour, November 20, Harry landed at V.C Bird International Airport and formally inspected a guard of honor during a military parade at the airport. Harry’s trip is to mark the 35th anniversary of independence for Antigua and Barbuda.

That evening, Harry attended a reception hosted by the Governor General, Sir Rodney Williams, at the newly renovated Clarence House (which was built for the same man as Clarence House in London). Harry presented a photo of Queen Elizabeth and Prince Philip to the Governor General and read message from The Queen to the people of Antigua and Barbuda:

“Prince Philip and I send our warmest wishes to Antigua and Barbuda on the occasion of this celebration to mark 35 years of Independence. I have fond memories of visiting your country in 1966, 1977 during the Silver Jubilee and again in 1985.

“I will never forget the warmth of your people and the incredible natural beauty of the islands. It has been a great privilege for me to watch Antigua and Barbuda develop into the confident country it is today with a strong national identity and a positive outlook.

“I congratulate all of you for the part you have played in building this community and creating so many opportunities for the next generation.”