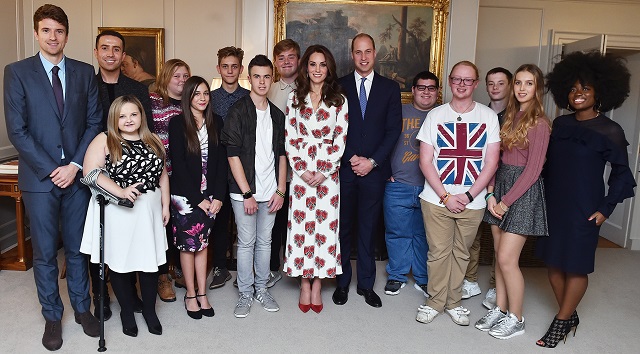 William and Kate met with: Lewis, who, despite his own health problems, has created a social platform for poorly and disabled children; Niamh, who has a rare auto-immune illness called neuromyelitis optica (NMO) and is a children’s ambassador for the NMO UK charity and helps to raise awareness of her condition with a blog while running a support group for young people; Joe and Toby, who are both active volunteers and fundraisers for Cancer Research UK; and Lucy and Lauren, who were members of a team in the 2015 TeenTech Awards and whose idea for a lightweight medical emergency kit, the Medical Military Shuttle, went on to win the People’s Choice category. You can find out more about them all here.

BBC Radio 1 released a video of the meeting. In the video, Kate tells the teens: “[Unintelligible] I don’t know how all of you sort of find time to do the volunteering. It’s such a great thing… Keep it up.”

William told three of the teens “You guys are shining lights for your age group”, and then told the whole group:

“Thank you to Radio 1 as well for doing the teen awards, it’s fantastic to highlight all you champions. You’re a huge inspiration and I know you’re the most modest people I have ever met. You should be very, very proud of all the hard work and all the effort you put in. You’re leading the way, so well done.”

Just on the superficial side, this video allows us a good look at Kate’s ugly McQueen poppy dress she wore to the Team GB reception. It’s much worse now that I see a good front view of it.