Yesterday, October 3, as Patron of WellChild (since 2007), Prince Harry attended the WellChild Awards at the Dorchester Hotel in London to meet with the winners if this year’s awards and give a speech.

Founded in 1977, WellChild supports children and young people in the UK living with a long-term or complex health condition get the best quality of care possible. WellChild provides practical and emotional support to seriously ill children, young people, and their families, enabling them to leave the hospital and live life in their own homes; and they fund projects and research to ensure parents, carers, and those who work in the children’s healthcare sector are better equipped to provide support to children and young people with long term, complex healthcare needs.

Harry worked the pre-awards reception with the winners of the awards, and got a hug from 5-year-old Ollie – who was born healthy but developed the rare genetic condition Battens Disease, which has no cure, and will eventually leave him unable to walk, see, eat, or breathe. Ollie had some trouble standing to give Harry a hug, but Harry, who got down on the floor with him, helped him and gave him a hug.

“Ollie isn’t actually aware of who Harry is but just reacted instinctively to the way he was talking and interacting with him. He is brilliant with kids and just very natural. He was very privileged as Ollie cannot use his legs but he just used his strength to stand up and hug him. I felt really proud of Ollie – and of Harry too! I was so touched at the time he took to talk to Ollie. He even knew about his younger sister, Amelia, who is three and has also developed Battens. It was incredible.”

It seems like Harry actually reads his briefing notes.

Harry met 8-year-old Sam – who was born 26 weeks premature and has a host of significant health needs – who gave him a monkey he made from two socks. After Harry was done speaking with Sam and his father, Harry told Sam: “I’m going to give it to someone else to look after while I walk over there.” Which, in my opinion, is the proper way of making a child feel good after giving you a gift, instead of handing it off right away without a word three feet away from them.

Sam’s father said of Harry: “What was so remarkable was that he knew everything about Sam and the medical problems he has, even the fact that he was taken into hospital on Friday. He seemed genuinely touched by the present and said he would definitely take it home with him.”

Again, this is what happens when one reads one’s briefing notes.

Prince Harry is presented with a monkey, made from two socks by Sam, 8, at the WellChild awards pic.twitter.com/cGk4Ylz8FH

Harry also spoke to 10-year-old Jessica, the Good Morning Britain Inspirational Young Hero Award Winner, who helps to care for her older brother William, who has complex health needs and autism, while also dealing with her own hyper-mobility and a mother, Paula, with MS.

Jessica gave Harry a picture she drew of him, and told him that her older brother William could be embarrassing sometimes because of his condition, to which Harry laughed: “I have an older brother called William and he’s embarrassing all the time!”

“Wow, wow, wow – another incredible year of awards, and barely a dry eye in the house amongst the adults. Upstaged once again by the younger generation!

“This is now my ninth WellChild awards and each year at this remarkable event, I am profoundly moved by the people I have met and the stories they have shared with me. It is one of those moments in life when you are left in awe at the strength of human character, particularly amongst those so young. Watching these children and young people face challenges with such determination, positivity and good humour, never fails to take my breath away.

“We are also here this evening to celebrate the selfless dedication of those around them, who work tirelessly to make their lives better – from remarkable young carers such as Brodie, Armaan and Jessica, to the devoted professionals and volunteers you will hear about later this evening – never underestimate the impact you have had on the many lives you’ve touched.

“Across the UK today, there are thousands of children and young people living with serious illness or exceptional health needs. Many are having to spend months and sometimes even years in hospital. But it doesn’t need to be this way. WellChild nurses are experts at training and empowering families to manage complex health needs so children can return home and enjoy the comfort that so many of us take for granted.

“We have heard tonight how important ‘home’ and ‘family’ are in giving many of our young winners the foundation and inspiration to defy the odds. With your support we can give many more children and young people the best chance to thrive – at home, together with their families. As you have seen this evening, WellChild’s work really does change lives.

“Thankfully WellChild now has more nurses working across the UK than ever before – many of whom are with us tonight. But at a time of ever-increasing demand, their role in enabling children to be cared for safely at home with their families is more important than ever. Please continue to support these amazing nurses in getting more children home, where they belong.

“I would like to congratulate all of tonight’s winners again, well done and thank you for inspiring all of us with your strength, positivity and selflessness. I am so fortunate to have had the chance of meeting you all and so proud to be associated with this fantastic charity. I hope you have a wonderful evening. Thank you.”

Here is a video WellChild produced of the event which actually has uplifting music to match the uplifting images.

Harry received a WellChild friendship bracelet made by 3-year-old Joshua. 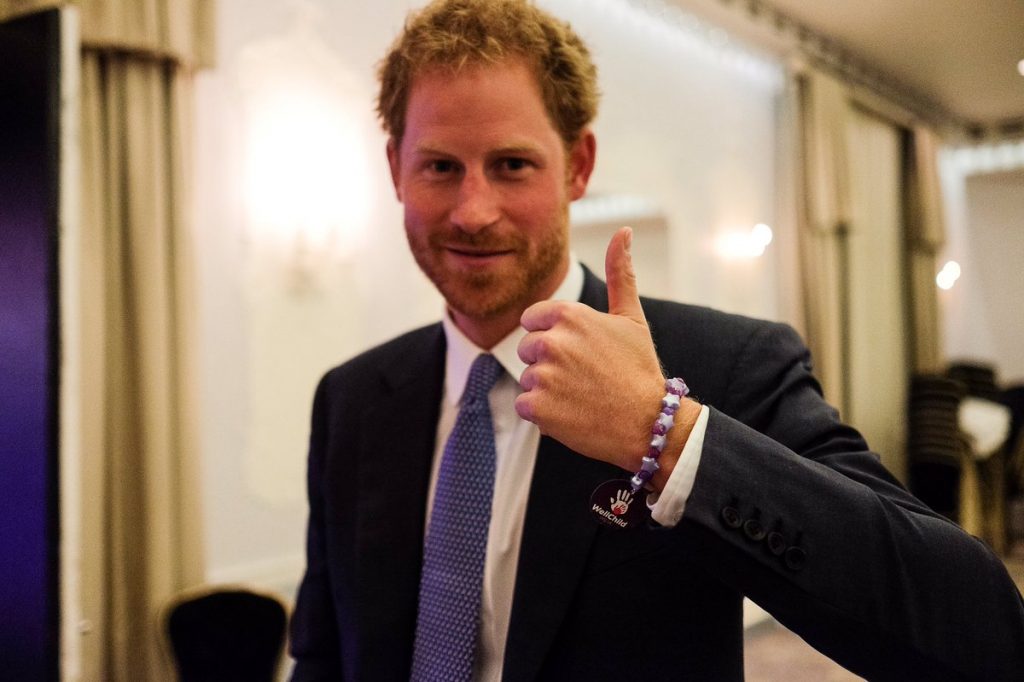 PS. I totally forgot that the WellChild awards were yesterday, but I rearranged my post schedule because I know that you guys love Harry.

Over the weekend, I wrote up a bunch of articles about various royals which I missed while William and Kate were on tour and have them, and two more tour polls, scheduled to post throughout the rest of the week and into next week. I will cover Kate’s trip to the Netherlands on October 11 and her and William’s trip to Manchester – which KP announced yesterday and will see them visit Football Museum, Manchester Town Hall, University of Manchester (graphene), and Francis House – on October 14.

Other than that, and unless something major happens, I have over a week’s worth of articles ready to go so that I can take a break from writing (though I’ll still be checking in on the comments). So if you guys want me to cover something specific, please email me, other than that the rest of the week and next week are going to be catch-up posts and tour polls.