You guys, I just…. Sigh. Kate Middleton joined Prince William for a pre-tour reception at Kensington Palace yesterday, April 6, and… Sigh. I don’t want to make fun of Kate’s fashion. I really don’t. Kate had some great pieces back in the day (note to self: finish Kate’s pre-George/post-George clothes comparison post) but lately… Sigh. Let’s do this.

2) I love polka dots. It’s a personal opinion. I think if the polka dots had been the defining feature of the dress (rather than one of many), it would have worked a lot better.

3) It does look like Kate put a lining under the sheer chest area for modesty. I can’t see cleavage on Kate the way I can on the model. So that’s a positive.

Now for the negatives.

1) Holy sheer panel, Batman! You know, part of me is happy that Kate wore this giant sheer panel because now I get to vent a frustration I’ve had with fashion for a very long time. I look at red carpet photos of celebrities for the fashion and a trend I’ve noticed that some women often wear is the giant V opening thing that shows a lot of cleavage – as demonstrated by Miranda Lambert at the ACM awards Sunday night. This, to me, is not flattering because it makes the wearer look wider instead of slimmer. How is creating a giant chasm down the middle of your torso flattering? I just don’t get it. I do tend to like a more sleek look so maybe it’s just too “fashion” for me, but it just doesn’t look flattering in my mind. And Kate’s sheer panel did the same exact thing. If it had been just a normal V, or even a deep V, sheer or not, I think it would have looked much better than whatever giant chasm it created.

2) Holy ruffles, Batman! What is with that high-collared ruffle at the neck? The high neckline is so restrictive already, but then they add a ruffle on top of it? And, as discussed on Twitter, the combination of the sheer panel with the ruffle is so odd. Which brings me to…

3) Too much busy! Between the polka dots, and the sheer, and the belt, and the ruffle, I don’t know where to focus. It’s like the designer picked a bunch of design features out of a hat and threw them all on the dress without thinking how they would all go together. Plus, the way Kate styled it with big hair and big earrings that got lost in the big hair, it was just too much.

4) While it’s fun to see Kate in a floor length gown, it is an odd choice for a cocktail reception. 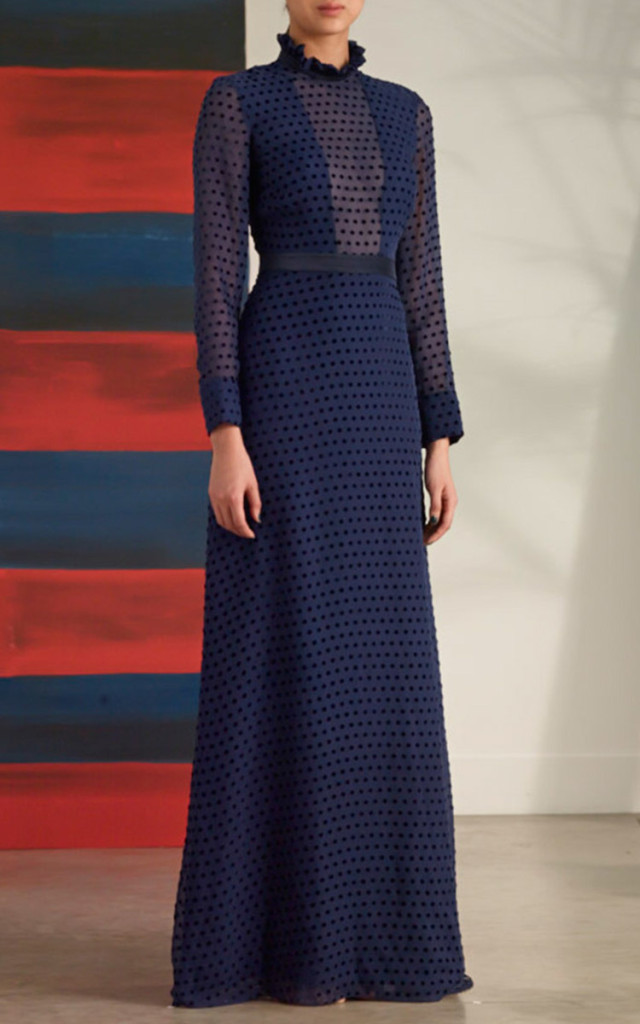 Alrighty, let’s talk about the actual event now that we’ve gotten the giant ruffled elephant out of the way. William and Kate attended a reception at Kensington Palace for young Indian and Bhutanese people living in the UK. 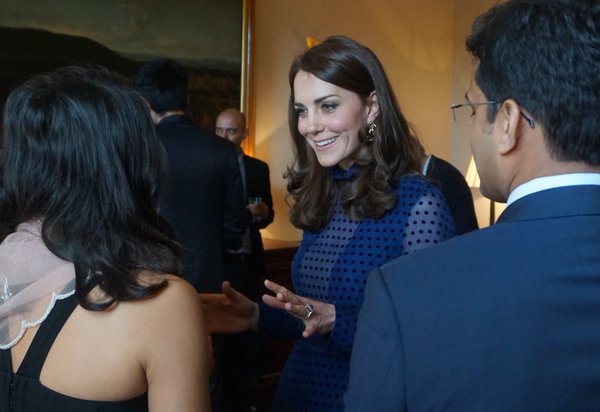 I guess the most interesting thing to come out of it (aside from cheesy snacks) is that Kate is a fan of spicy food but William “struggles” with spices.

“Model Neelam Gill, whose family is originally from the Punjab, said: ‘For my generation [William and Kate] have always seemed cool and approachable and I felt they were just that in person. It was really sweet seeing them as a couple.’ 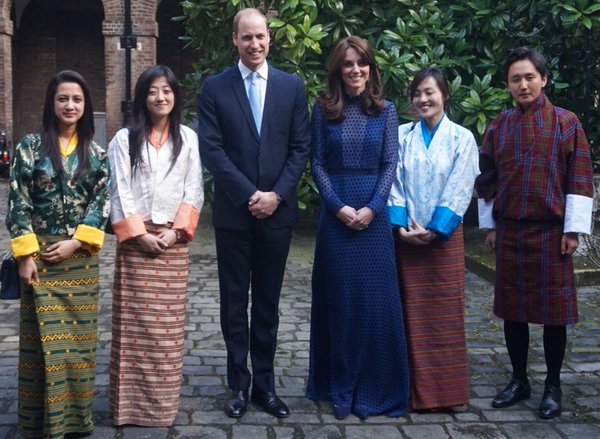 Earlier in the day, William was at Wembley Stadium to celebrate 10 years as President of The Football Association. William mentioned Princess Charlotte saying, “She’s a very good footballer. You hold her hand and she kicks it… Very sweet.” So I guess that means Charlotte is walking now, or at least standing? I wouldn’t know since we know so little about her.

Oh, and the FA chairman defended William against the claims he’s lazy. From the Express:

“The FA chairman also defended William against allegations of laziness, insisting he did much work behind the scenes that went unseen and held FA board members to account. Noting that there were several members of the media in the room, Mr Dyke added: ‘He asks tougher questions of us than many of the journalists we encounter.'”

So, there you go. 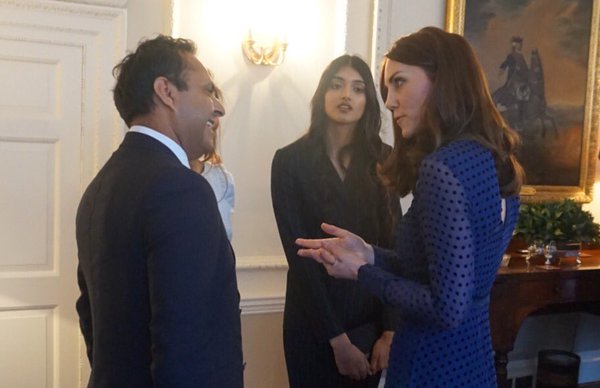 They served cheesy snacks at the reception.

Possibly the best cheesy snacks ever at Kensington Palace this evening pic.twitter.com/gjSmfoG4Of

In this video of the event, at 0:35, William puts his arm on Kate’s shoulder as they are walking back inside from the courtyard.

If you want a look at Kate’s makeup.