Prince Harry out at Battle of Britain flypast, dinner with Cressida Bonas on his birthday

The Ginger Prince is back in full Ginger Bearded glory! Prince Harry celebrated his 31st birthday on September 15 with a Battle of Britain event during the day and a dinner with friends and Cressida Bonas in the evening and he didn’t bother shaving his ginger beard he got while in Africa over the summer, because he knows that’s how we like him.

Harry was originally scheduled to fly one of the Spitfire Aircraft during the flypast, but there was a rain delay and then one of the aircraft was not serviceable, so Harry gave up his seat in the Spitfire so that one of the veterans, 95 year old Battle of Britain Veteran Tom Neil, could fly one last time. That’s Neil in the cockpit in the above photo. 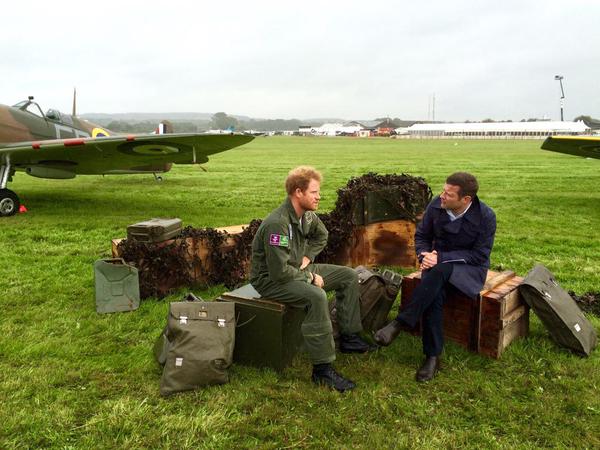 Harry gave an interview to Channel 4’s Battle of Britain: Return of the Spitfires where he said:

“I can’t begin to comprehend what they must have gone through. Knowing that they had as much warning as they had, with more and more aircraft taking off, taking off, taking off and then getting that phone call saying ‘Right scramble, off you go lads’ and not really knowing what you are going to be confronted with, the different weather conditions, different conditions you are fighting in, these things are just full of fuel as well and a couple of rounds in the wrong place.”

Later that night, after his Battle of Britain event, Harry went to dinner with a group of friends that included Zara Phillips Tindall, Mike Tindall, and Cressida Bonas. The Sun is reporting that Harry and Cressida want to give it another go (even though they reported last week that Harry wanted to get back with Chelsy Davy), but the Daily Mail says Harry and Cress are just friends and are definitely not getting back together.

What I find amusing about the DM article is that clearly their source is from Camp Cressida, because: “Cressida is very fond of him but, well, he didn’t quite cut the mustard. The issues that were there when they broke up haven’t changed… I think Harry just expected Cress to keep up with his lifestyle. But she isn’t wealthy, she’s a hard-working girl who just couldn’t do that. Her career is going well and she just has other things going on in her life, she’s not the type to be at anyone’s beck and call.”

I could poke fun at Cressida and her PR team but I won’t. Girl just landed a gig on a new Julian Fellowes show (he’s the creator of Downton Abbey). As much as I think Harvey Weinstein’s words on Cressida’s acting ability and Cressida’s words on not using Harry to get famous are BS, girl is landing gigs. I say get your acting on girl and leave the royal-ing to someone else. 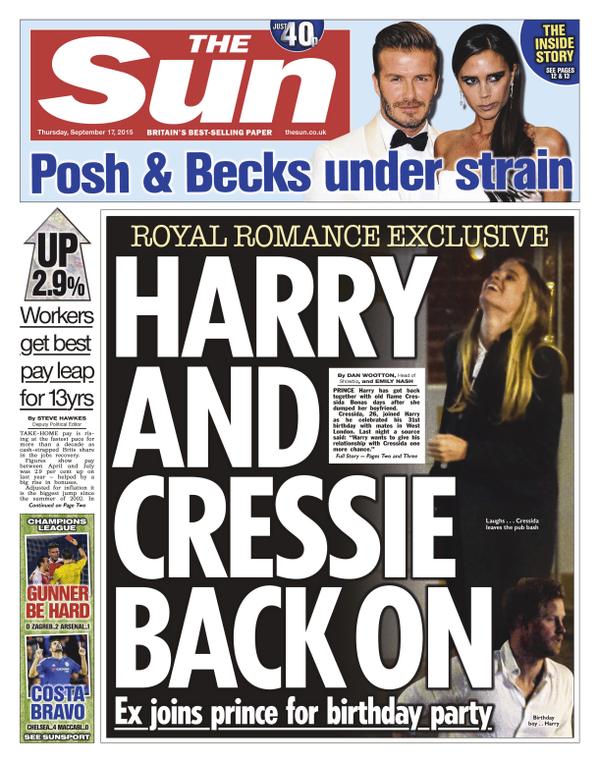 Switching gears, I find it quite amusing that a few of us were just commenting about which actor was the best James Bond, and a day later Kensington Palace announces that Prince William, Kate Middleton, and Prince Harry will attend the world premiere of the newest James Bond film, Spectre, on October 26 at the Royal Albert Hall. Spectre has been chosen for the Cinema and Television Benevolent Fund’s Royal Film Performance 2015 which is why the royal trinity is attending. That and they just want to see James Bond, amirite. I mean, I don’t blame them, I think Daniel Craig is a great Bond (I, personally, am a fan of the grittier Bond) and I loved Casino Royale, so I’m looking forward to the next Bond movie.

In terms of fashion, this is a chance for Kate to wear a really beautiful gown, so there’s that. I find it interesting, though, that out of all the appearances that KP has announced for Kate, only one is a charitable endeavor. And it’s not even for one of Kate’s actual patronages. The rest are rugby and a film premiere.

Here are more photos from the 15th:

37 thoughts on “Prince Harry out at Battle of Britain flypast, dinner with Cressida Bonas on his birthday”