It’s that time of year again, folks. That time when the Duke and Duchess of Cambridge’s press office realize that Prince William and Kate Middleton haven’t done hardly any work in the UK, and stuff their calendars full of last minute appearances to boost their yearly numbers. It’s happened every year since they were married. Both Will and Kate have announced four new appearances for the next eight days. Plus, as I was in the check-out line I read a Globe article that was funny, so I thought I’d share.

Will and Kate will carry out two joint appearances in Wales on November 8. They will visit the Valero Pembroke Oil Refinery in West Wales for the celebration of their 50th anniversary, then they will attend the Wales v. Australia rugby match in Cardiff. During half-time (?), Will and Kate will meet injured veterans. William is Vice Royal Patron of the Welsh Rugby Union (since 2007), and Patron of the Welsh Rugby Charitable Trust (since 2012). Will and Kate attended a Wales v. match last time she was pregnant, too, in 2012.

Kate will attend a SportsAid athlete workshop on November 12 where she will meet young athletes whose goal is the 2020 Tokyo Olympics. This will be Kate’s second SportsAid appearance this year – her first was on July 29, when she stopped by a SportsAid reception during her time at the Commonwealth Games.

The same day Kate is visiting SportsAid, November 12, William will attend Skill Force’s 10th anniversary gala dinner at the Imperial War Museum in his role as Patron. He’s been Patron since 2009.

The next day, November 13, Will and Kate will attend the Royal Variety Performance at the Palladium Theatre in London. Prince Charles and Camilla, Duchess of Cornwall attended the show last year.

By the way, what ever happened to William’s air ambulance training thing? Wasn’t he supposed to have started whatever BS he’s going to be doing with them back in September? Yet since he was supposed to have started that he’s visited Malta, done an Investiture, made the President of Singapore uncomfortable with his inappropriate small talk, taken a vacation to Scotland, and now he’s visiting Wales and attending a gala and a variety performance. That seems like a lot when he was supposed to be working super hard with only two days off a week.

I want to mention that according to this article Kate declined to make an appearance at an Art Room opening on October 28, citing her “ongoing morning sickness”. Yet a day or so prior, Kate flew to Scotland. So it wasn’t her “morning sickness” that caused her to decline the event, it was her Scottish vacation. Now, Kate’s patronages are constantly doing things, and Kate can’t attend everything, so I don’t think it would be too shocking if she declined an event. My problem is declining because of morning sickness and then flying to Scotland instead – proving morning sickness isn’t an issue. Just be honest, you know. Now, all we have is the word of one sentence in this one article, and who knows, maybe they thought Kate would show up and when she didn’t the journalist (whose name is not actually on the article) just assumed it was morning sickness since that was the line from the previous two months. We don’t know. But either way it makes Kate look bad declining her charity’s events while jetting off on vacation.
*Thanks to bluhare and My2Pence for bringing this to my attention.

Now on to something funny. As I was standing in line at the grocery store, a headline reading, “William gives up the throne… to save pregnant Kate” caught my eye. I glanced through it and then took some photos (because I wasn’t going to spend five bucks on a Globe, no offense Globe). The story is pretty funny, it’s about how Queen Elizabeth II (who is dying, apparently) had by-passed Prince Charles and made William first in line and will be abdicating soon, and how William wants to not be king because Kate can’t handle being Queen Consort AND raising two kids all by herself, and something about how Camilla is evil and “true love” and there’s a Wallis Simpson reference thrown in there for good measure. It reads like a work of fan-fiction – which is is. It’s got everything: a dying Queen, a scheming Camilla, William jumping Charles in the line of succession, a poor sick Kate who is just so brave.

“The sight of Kate suffering like that reduced William to tears.” – LOL! More like William was reduced to tears at the thought of having another screaming baby to deal with.

“But when he broke the news to his wife at the mother’s home in Bucklebury, Kate was shocked by his decision. She immediately urged William to change his mind and forget about her sickness and her worries.” – Ah, she’s just so selfless. “Don’t think of my current sickness, Will, think of my the long term goal of being Queen Consort!”

“Of course he wants to be there for her throughout this difficult pregnancy, but he also wants to be around as much as possible for the first couple of years of the new baby’s life.” – He’s been mostly MIA during the pregnancy so far since Kate’s been in hiding at her mom’s. And he seems to really dislike George and his screaming, so why the sudden interest in the new kid?

“William and Kate are becoming the love story of the 21st Century… much like his relative King Edward, who abdicated back in 1936 so he could marry his American divorcee lover, Wallis Simpson.” – For real? You’re making THAT comparison? You do know that both Edward and Wallis were Nazi-sympathizers, right? Like, they were BFFs with high-ranking Nazis; he and Hitler were buds. THAT’S why Edward was forced out; he didn’t give up the throne for love.

Below are the pics of the article (these are thumbnails but if you click on the image it takes you to the full size image). I’ve transcribed the article in a separate page (here) so that this post wasn’t even more ridiculously long than it already is, in case anyone wants to read the full article and doesn’t want to read off the images. It’s pretty funny. 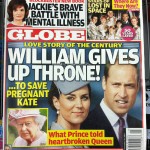 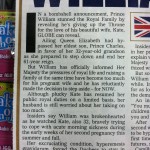 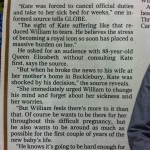 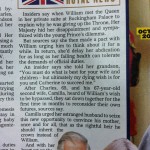 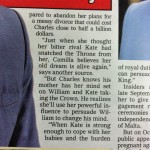 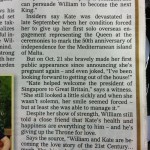