On Day 11 of their tour (April 17 day in OZ; April 16 night in US), Prince William and Kate Middleton visited the Blue Mountains where they met families whose homes were destroyed by the local area bushfires in October of last year.  They then visited with the Girl Guides where they planted a tree (and by “planted” I mean they each threw one shovelful of dirt on the already planted tree) and had lunch, meeting firefighters and more bushfire survivors.  Next on their agenda they visited Echo Point and the Three Sisters where they took in the view and watched some abseiling.  There were walkabouts mixed in everywhere.

While watching the abseiling, Will stood next to the cliff ledge and looked down.  That move probably gave his handlers a heart attack, but I bet it was a great sight to see.  Will and Kate received some gifts while in the Blue Mountains, they received possum skins from three Aboriginal Elders, and George got a kangaroo skin.  While meeting the Girl Guides, William asked if they enjoyed school and the older girls said they didn’t; to which William said, “That’s all right.  I didn’t really like school either.”  I could see that, he did want to leave university after one term—but if he hated school so much, why did he go to that “bespoke” Cambridge course?  Oh yeah, PR and to get out of royal duties.  You know, I could also see this comment as something nice to say to make the girls feel better about not liking school—trying to relate to them.

At one point, Kate told a girl in the crowd that George is “cute but very, very loud.”  They really need a new talking point.  Both Will and Kate have been complaining about how loud George is since he was born.  We get it, Cambridges, he’s loud and you don’t like it.  It’s called having a baby, deal with it. 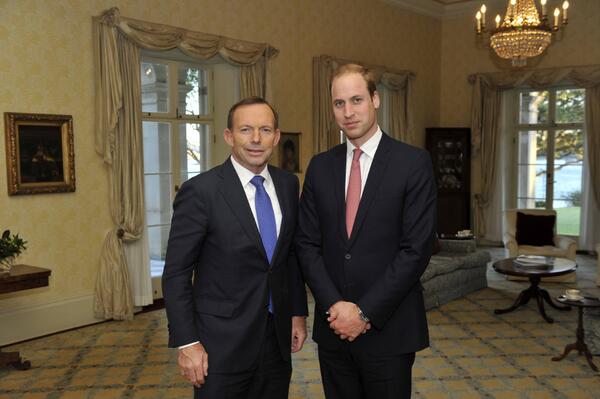 After the day’s appearances, William had a meeting with the Australian Prime Minister, Tony Abbott, where they discussed the bushfires that affected the region and the Rural Fire Service.  During their meeting, they had—what I feel as—a rather strange bit of conversation.  When talking about his visit to the Three Sisters, William said, “It was a beautiful area.”  To which Abbott replied, “It would have helped to remind people that it’s still a fantastic place to visit.”  William then laughed and said, “Well I don’t know about that.”  What?  Does he not know if it’s a fantastic place to visit, or does he not want to actually tell people how fantastic a place it is to visit?  If it’s the latter, then what is the point of him?  The whole point of the royals is to promote stuff, if he doesn’t want to promote something then there is no point in him going there.  I don’t know, it’s hard to tell.  William has a strange sense of humor. 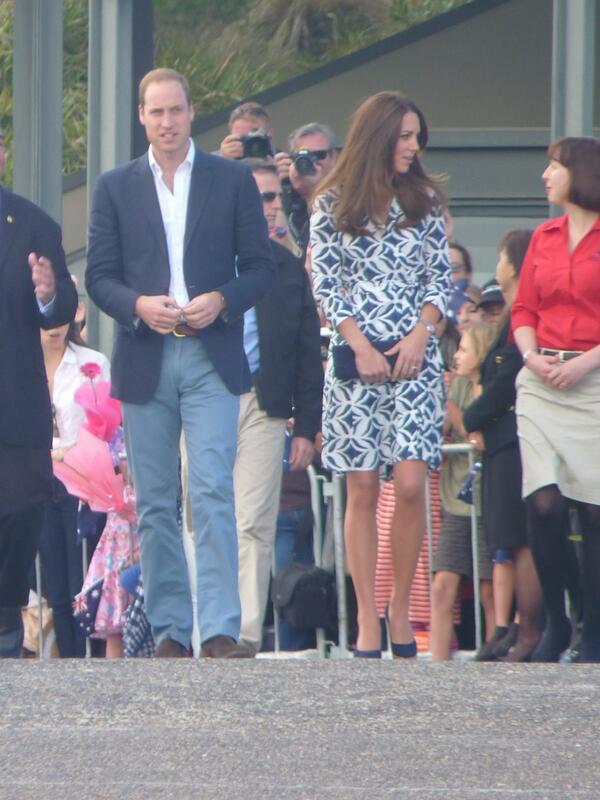 For today’s appearances, Kate wore a blue and white print Diane von Furstenberg dress, the “Patrice” style ($325).  It’s a wrap dress with ¾ length sleeves that comes to above the knee on Kate (oddly enough on the model on the site it covers the knees; don’t know if Kate had it altered to be shorter of if she’s just taller than the model).  Kate accessorized the outfit with her Stuart Weitzman clutch and the Wedges of Doom.  For jewelry, Kate wore her sapphire and diamond earrings, Mappin and Webb necklace, and Cartier watch.  Kate wore her hair down.

I’m not in love with the dress.  I just don’t like an all-over print; it’s too busy for me.  The same pattern comes in a skirt option, and that paired with a solid top would be nice; it’s really just the all-over print to which I have an aversion.  She looks okay (except for the wedges), but it’s not my favorite.  Also, when she was exiting the helicopter, she had to hold down the dress lest she have another “Marilyn Moment”.  Hem weights, girl!  Invest.

There was an incident while the Cambs were in the Blue Mountains.  Two men were detained by the police for “behaving suspiciously” close to the car carrying Will and Kate.  They were allegedly harassing the crowds and talking on headsets.  They weren’t arrested, but they were searched and told to leave.

Question:  Is anyone else getting Cambridge fatigue?  Don’t get me wrong, I’m so glad they’re actually doing something, but do there really need to be 8 new articles on the DM every day?  Not to mention the multiple articles on every other British site out there.  One article with way less random people saying how awesome the Cambs are and more actual reporting of what they did would suffice.  I feel like the coverage hasn’t been as extensive in the US media.  Hm.  The constant coverage isn’t enough for some people, though.  Check out the photo below of a British man’s letter to the Times.  By the way, Tuesday was their off day, so there wouldn’t have been any new photos to go in the papers the next day.  Homeboy needs to chill. OR he was being sarcastic because there is so much coverage (thanks Lazykins for pointing that out). I didn’t pick up on that because either A) I’m an American and we don’t always get British humor, or B) sarcasm doesn’t always translate well in print, or C) some combination of both. 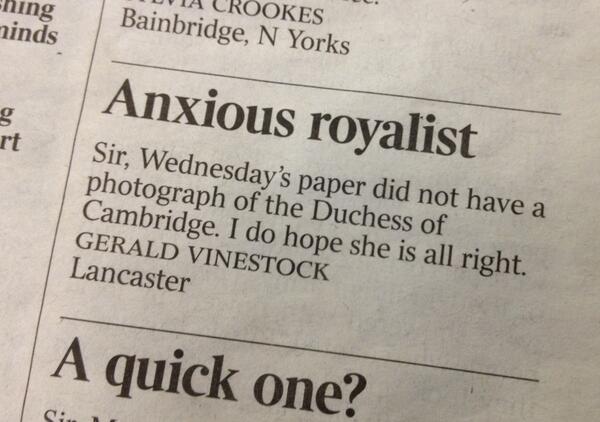