Kate, William and George land in Wellington to start their 3-week tour (updated)

Prince William and Kate Middleton, Duke and Duchess of Cambridge, have officially landed in New Zealand—along with their son, Prince George—to start their three week tour of NZ and Australia.  They landed in Sydney first; then took a plane to Wellington.  They then went to the Government House for a ceremonial welcome including a Maori Powhiri and a 21 gun salute. Kate meeting the Governor-General and his wife; Kate greeting the Maori with a traditional greeting, called a Hongi; Kate meeting the Maori performers. UPDATE: Here is an article about the Maori greeting and dance, with a lot of nice pictures. It mentions Kate giggling when she met the Maori men who were wearing their traditional garb. I have now seen a video and I don’t think she was “giggling” as the article would have us believe. It seemed more to me that she was smiling and laughing at what the man was saying, rather than giggling because she was embarrassed or something. /UPDATE 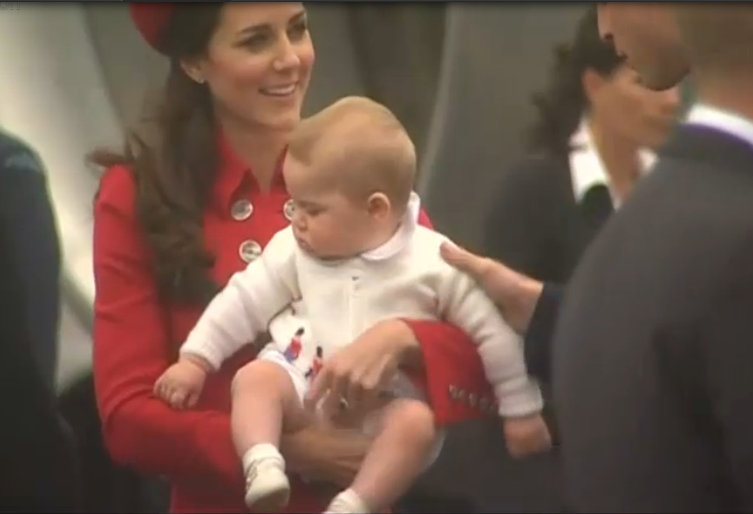 Kate arrived in Sydney wearing a grey Max Mara dress (£310/$513) she’s worn previously to an appearance at Hope House in February 2013.  Kate also wore Manolo Blahnik heels in beige ($595).  They are a smaller heel than she usually wears.  I like it.  Hopefully we’ll see those again.

Kate made a costume change between Sydney and Wellington.  When she touched down in Wellington Kate wore a red Catherine Walker coat, with a red dress underneath, and a red Gina Foster pillbox hat.  She also was back to her super high black heels she’s worn a lot.  Kate also wore a diamond and platinum silver fern brooch, which is from the Queen’s collection and was a gift from NZ from her tour in 1954. I’ll start with something nice: I love the color on her.  I do like her in red.  Now, before I get into all the air stewardess jokes, I have to say… BUTTONS!!!  It’s attack of the buttons with that coat.  I didn’t notice them at first, but when I saw a full shot all I could see was buttons, and now I can’t see anything else.  They are so large, and there are so many of them.  Of course, Kate is getting a lot of comparisons to air stewardesses… because there is a striking similarity.  Or she could have just been trying to copy Diana (again). Or she was channeling Jackie.  Take your pick, I guess.  Kate’s skirt flew up in the wind, again.  It was a good thing she was wearing the coat or else the skirt underneath really would have gone flying—it was trying to.  You can see it in the video (posted below).  She never learns (or maybe she thought she was safe while wearing the coat).  I have to say, if it weren’t for the matching hat, and those awful buttons, it would have been a nice coat.  But the shoulder pads, those terrible buttons, and the matching hat make her look like she’s wearing a bad costume from the set of Pan Am (disregarding that they wore blue).  So close Kate, so close. OH! Something else nice: Kate wore her hair in a half-updo. Her bangs still got in the way because of the wind, but it was better than wearing it down. I like the half-updo on her.

George looked adorable, but I can’t help but think he was probably over the whole thing.  It was a 25-27 hour flight, right?  He was probably grumpy.  He looked grumpy, and he was moving around and trying to escape Kate’s grasp.  Poor thing.  That flight really must have disrupted his schedule.  BTW, we got an image of his nanny, Maria.

23 thoughts on “Kate, William and George land in Wellington to start their 3-week tour (updated)”